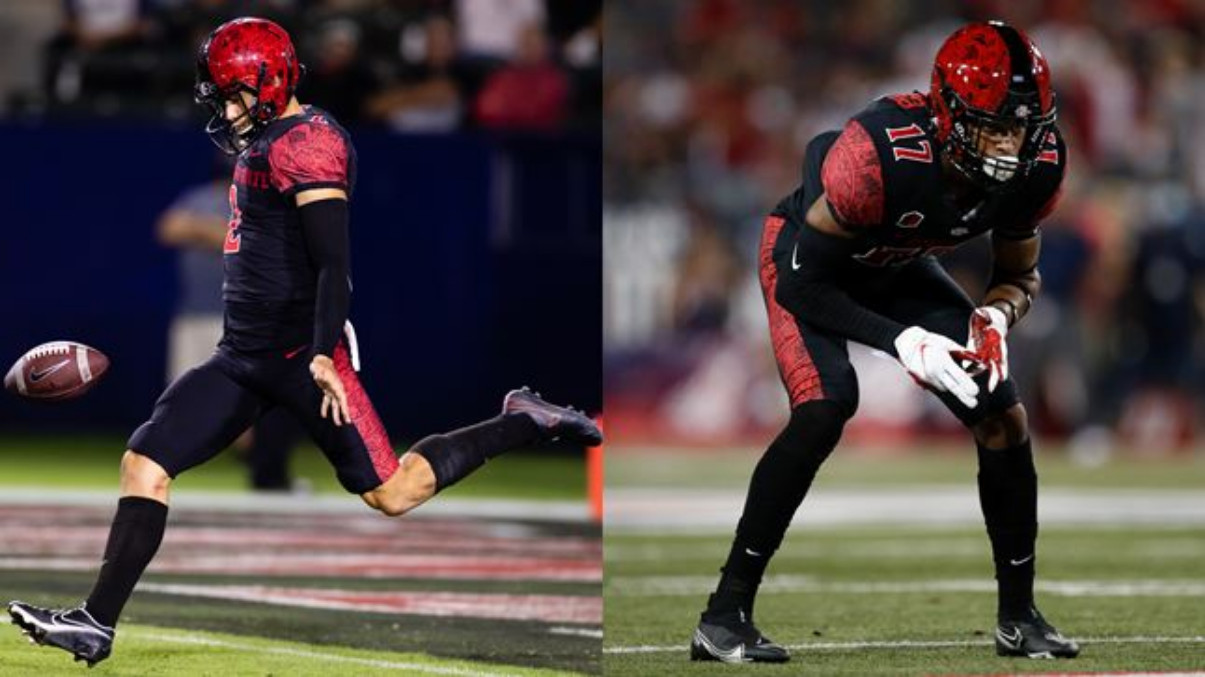 Mountain West Awards 2 Aztecs with Player of the Week Honors

Two San Diego State players have been honored as Mountain West Players of the Week, according to the league.

Junior Matt Araiza received the Special Teams Player of the Week for the second time – he also was honored in 2019 – while the MW named cornerback Noah Avinger Freshman of the Week.

Araiza, a Rancho Bernardo High alum, did a little bit of everything. He punted three times for 197 yards, with two landing inside the 20-yard line. He made both of his field goal attempts, of 48 and 36 yards, and all six PATs. On eight kick offs, six went for touchbacks. He also logged a solo tackle on one.

Including a long punt of 72 yards, Araiza’s 65.7 punt average was the highest in an FBS game since at least 1996 (based on a minimum of three punts).

His average was almost four yards more than the top MW performer in league history – Colorado State’s Pete Kontodiakos (61.8) against Hawai’i in 2012.

The 65.7 average on three punts also easily eclipsed his school-record average of 56.8 against New Mexico State on a year ago, but he didn’t reach the minimum (four punts) allowed to count for the program record.

Avinger, meanwhile, came up with three tackles, two of them solo, an interception and a pass breakup in his second start as a true freshman.

A half-tackle for loss and pass breakup were also the first of his career. On the season, Avinger has 11 tackles, eight solo.

(The story Mountain West Awards 2 Aztecs with Player of the Week Honors first appeared in Times of San Diego. It is being made available as part of the CalMatters Network.)