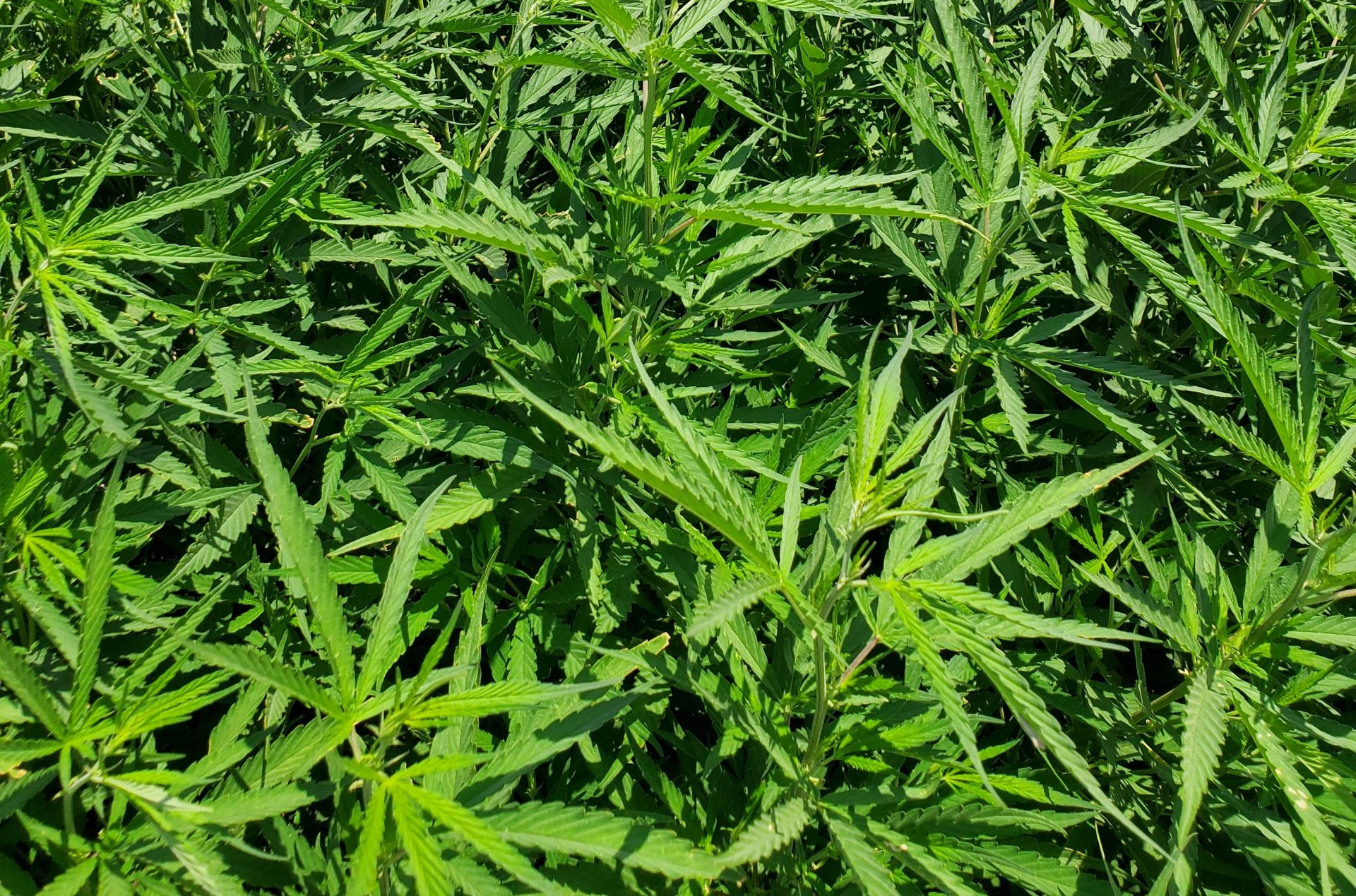 Jack Vessey of Holtville’s Vessey and Co. was custom growing about 19 acres of hemp for a customer from out of town on a plot near Holtville around June at the time of this photo. The crop will be used to harvest CBD from the plants’ flowers. | PHOTO COURTESY OF JACK VESSEY
In AgricultureRegional News

The legalization and regulation of hemp in dietary products should give a sorely needed boost to California’s hemp industry, which lags behind other states.

Processors in other states have been extracting cannabidiol and infusing it into a multitude of over-the-counter medications, beauty products, and food and beverages items for years. CBD-enriched products were flying off the shelves.

“This is going to be huge, huge for our business,” said John Currier, a hemp grower and part owner of Imperial Valley’s sole operational press, Imperial CBD Extraction.

“Before, it was not legal to add CBD into a dietary supplement. The only legal part was to grow it. They were allowing us to make it and grow it, but there was no regulation for retail,” Currier continued. “(AB 45) is going to take away the gray area for selling CBD on the retail level.”

The Imperial County Board of Supervisors has long been keen on hemp production in the Valley and voted to support AB 45 in February 2021. On Tuesday, Sept. 28, the board ratified a letter to Newsom requesting his signature on the bill that now sits on his desk with a multitude of others.

“In Imperial County there is almost half a million acres of farmland. With our abundant agricultural opportunities, the hemp industry could create new jobs, new economic opportunities, and more development in our county,” according to the letter.

Indeed, Imperial Valley appears to be the perfect place for hemp cultivation and processing. But the glacial bureaucracy and several other setbacks meant that growers got into hemp relatively late. After investing millions of dollars in seeds and processing projects, the market for industrial hemp crashed.

Baby Steps and A New Beginning

AB 45 is California’s latest step in a tangled, bureaucratic journey to a fully legal hemp market.

The passage of Senate Bill 566 in 2013 redefined marijuana to exclude industrial hemp and regulated the production of hemp by established agricultural research institutions and commercial growers.

But commercial cultivation didn’t become legal until Proposition 64 went into effect on Jan. 1, 2017.

California, by then, was late to the party.

In April 2017, the state Department of Food and Agriculture tasked each of California’s 58 county agricultural commissioners with hemp registration in their respective areas.

Seven months later, in November, the Imperial County Board of Supervisors passed its first policies legislating “Cannabis and Industrial Hemp” in a combined ordinance. Growers that wanted to cultivate hemp in the Imperial Valley for industrial purposes would need to register with the office of Agricultural Commissioner Carlos Ortiz.

The county Board of Supervisors was so bullish on the plant’s promise that it organized a hemp summit with the Imperial Valley Economic Development Corp. in September 2019, which drew hundreds of businesspeople, growers, marketers, and advocates.

Several local businesspeople submitted proposals for CBD presses in Imperial County but did not go forward with their projects.

Brothers and partners John and Andrew Currier invested about $5 million to build Imperial CBD Extraction on Aten Road in the city of Imperial’s business park. That facility has been the only one to make it to operation.

Sutton Morgan’s project was the most ambitious, the one where so many local growers bet on what seemed a sure thing. He partnered with Mark Samuels of Escondido to form Primordia LLC, which invested “millions of dollars” in a “vertically integrated” facility that was to process “biomass, dry, mill, grind, extract, and produce THC-free (CBD) distillate or water-soluble powder” on an “industrial scale” outside Brawley city limits, according to Samuels.

Their bold claims reflected the hemp fever sweeping the Valley. Local growers planted slightly more than 13,983 acres of hemp on 242 plots, according to the county Ag Commissioner’s office.

But try as they might, Imperial Valley’s growers were late to the game.

“It seemed like we could have gotten in on the ground floor,” Ryan Kelley, District 4 Imperial County supervisor said in a recent interview. “The hemp conference made money, as predicted. What happened after the hemp conference; the cost of distillate and isolate tanked.”

Imperial CBD Extraction is doing well and business is getting better every month, Currier said. He produces an average of 300 liters of CBD oil per week, and most of his customers buy a liter at a time.

“We have about 200 customers. We want companies to buy 100, 200 liters at a time. I’d rather deal with four customers that buy large amounts than hundreds that buy small amounts,” he said.

The passage of AB 45 should help. Currier expects several of his clients — beverage and personal care companies and which had been experimenting with CBD — to introduce new products as soon as it’s legal. He expects wholesale prices to rise as well.

“It’s definitely going to open up doors and eat up biomass inventory,” Currier said. “A lot of biomass grown over the last three years is still in inventory. It will make prices rise on the wholesale level.”

The Bill Has Some Detractors

The bill is “a harmful anti-farmer bill masquerading under the guise of consumer safety that will harshly regulate the nascent industry to death,” according to a press statement from the California Hemp Farmers Guild.

But that shouldn’t be a problem for Imperial Valley growers working with hemp, according to Currier.

None of the hemp grown in Imperial Valley was of sufficient quality for smokable products. For it to be good enough to smoke, it needs to be grown indoors, he said.

Not to be confused with legal medicinal and recreational cannabis in California, smokable hemp is not to an attempt to get “high” like cannabis; rather, it’s another method of ingesting the medicinal benefits of CBD.

Still, AB 45 “clears the path to better assist producers in knowing what they can and cannot do in terms of what and how it can be processed for consumption,” Tim Wright chief executive officer of Cannaffornia, a cannabis production, retail, and distribution project in Heber.

Officials with the Imperial County Farm Bureau did not immediately return a request for comment.