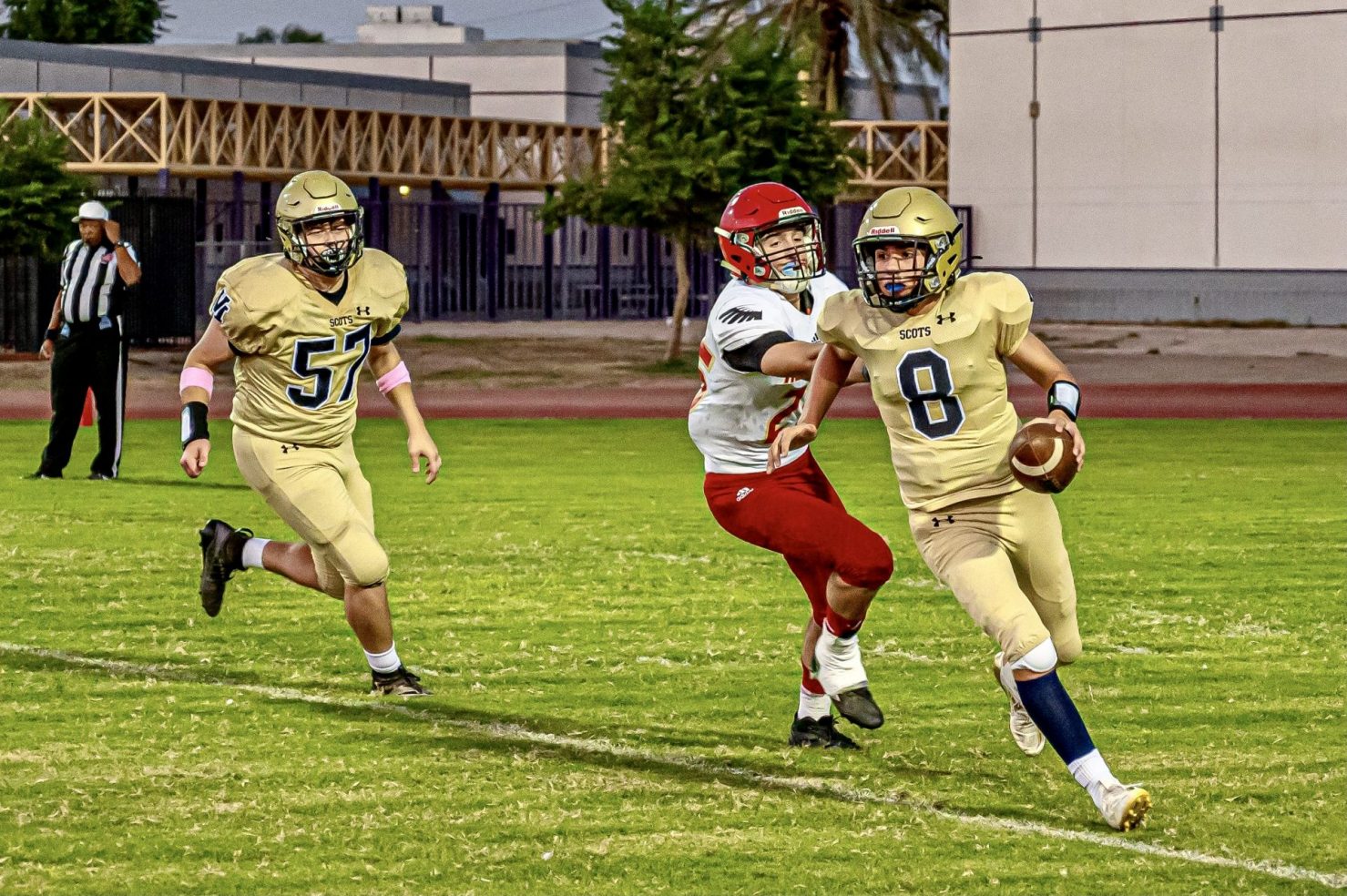 EL CENTRO — Through the air and on the ground, Jacobo Elias and Armando Apodaca were able to lead the Vincent Memorial Catholic High School football team to a 16-14 Desert League victory over Mountain Empire High of Pine Valley at Southwest High here on Saturday, Oct. 2.

The duo accounted for just about all the offense for the Scots (4-2 overall, 1-0 in DL action) as they won their fourth straight game after dropping the first two contests of the season.

Against the Redhawks (2-4 overall, 0-1 in DL), sophomore quarterback Elias and junior receiver Apodaca connected eight times for 169 yards and a touchdown. Apodaca also had a rushing touchdown to go along with his receiving score.

“I feel real comfortable with him back there at quarterback,” said the 16-year-old Apodaca. “We’ve been playing together since we were 7 years old and playing for the Halcones (youth football) in Mexicali.”

As good as the combination of Elias-to-Apodaca was against Mountain Empire on Saturday, it was a defensive score that turned out to be the game-winning points. With the scored tied 14-14 and 5:31 left in the game, the Redhawks had the ball at their own 29-yard-line and were punting on fourth-and-3.

A bad snap over the punter’s head put the bouncing ball into the end zone where Scots’ freshman Pablo Zavala was able to tackle the punter for the safety to put Vincent Memorial up 16-14.

The safety also gave the Scots the ball after the free kick and they were able to burn some clock as they drove to the Redhawks’ 43-yard-line before the drive stalled. A Jose Guevara punt pinned Mountain Empire at its own 7-yard-line with 2:56 to play.

The Redhawks weren’t able to muster any offense on the final drive and a fourth-and-8 attempted pass went incomplete and gave the ball back to Vincent Memorial for two kneel downs in the victory formation.

“This game was good but we know we have to be sharper as we get deeper into the league schedule,” said Elias, who completed 16-of-29 passes for 247 yards, one touchdown and no interceptions. “The league games are going to be tough, so we’ve got to get back to practice and get better on the field and get our mental focus right for the rest of the league games.”

The Scots opened the scoring in the first quarter when they went on a 10-play, 73-yard drive that Elias accounted for all but five yards.

After a 28-yard completion from Elias to junior Andre Rodriguez put the Scots at the 4-yard-line, Apodaca scored on a four-yard rush on the next play. Elias did the kicking duties as well and booted the extra point to put his squad ahead 7-0 with 2:35 left in the opening quarter.

No more points would be scored in the first half, but with 5:02 left in the third quarter, the Redhawks evened the score when Elias fumbled the ball at his own 2-yard-line and it was picked up and taken into the end zone by a Redhawk defensive lineman.

Mountain Empire converted the extra point and pulled even at 7-7.

It didn’t take long for the Scots to respond as they answered with a six-play, 84-yard scoring drive, culminating with a 59-yard touchdown strike from Elias to Apodaca. Elias scrambled long enough to let Apodaca get behind the defense and hit him with the deep throw. Elias’ extra point kick put the Scots ahead 14-7 with 1:35 left in the third quarter.

Mountain Empire scored on the final play of the third quarter on a five-yard blast up the middle from senior running back Larry Clark, knotting the game up at 14-14 heading to the final period.

“Elias has matured a lot already this season,” said Fernando Santana, Vincent Memorial’s assistant head coach. “He’s intelligent, he can elude tackles and he’s always looking to make a big play. And Apodaca wants the ball. He’ll find a way to get open and he wants it thrown his way.”

Mountain Empire steps out of DL action on Friday, Oct. 8, when the Redhawks host Tri City Christian of Vista for a 7 p.m. kickoff in Pine Valley.

Vincent Memorial will host DL foe Calipatria at 6:30 p.m. on Saturday, Oct. 9, at either Central Union High’s Cal Jones Field or back on the campus of Southwest High in El Centro. The Scots don’t have a home field on their Calexico campus.