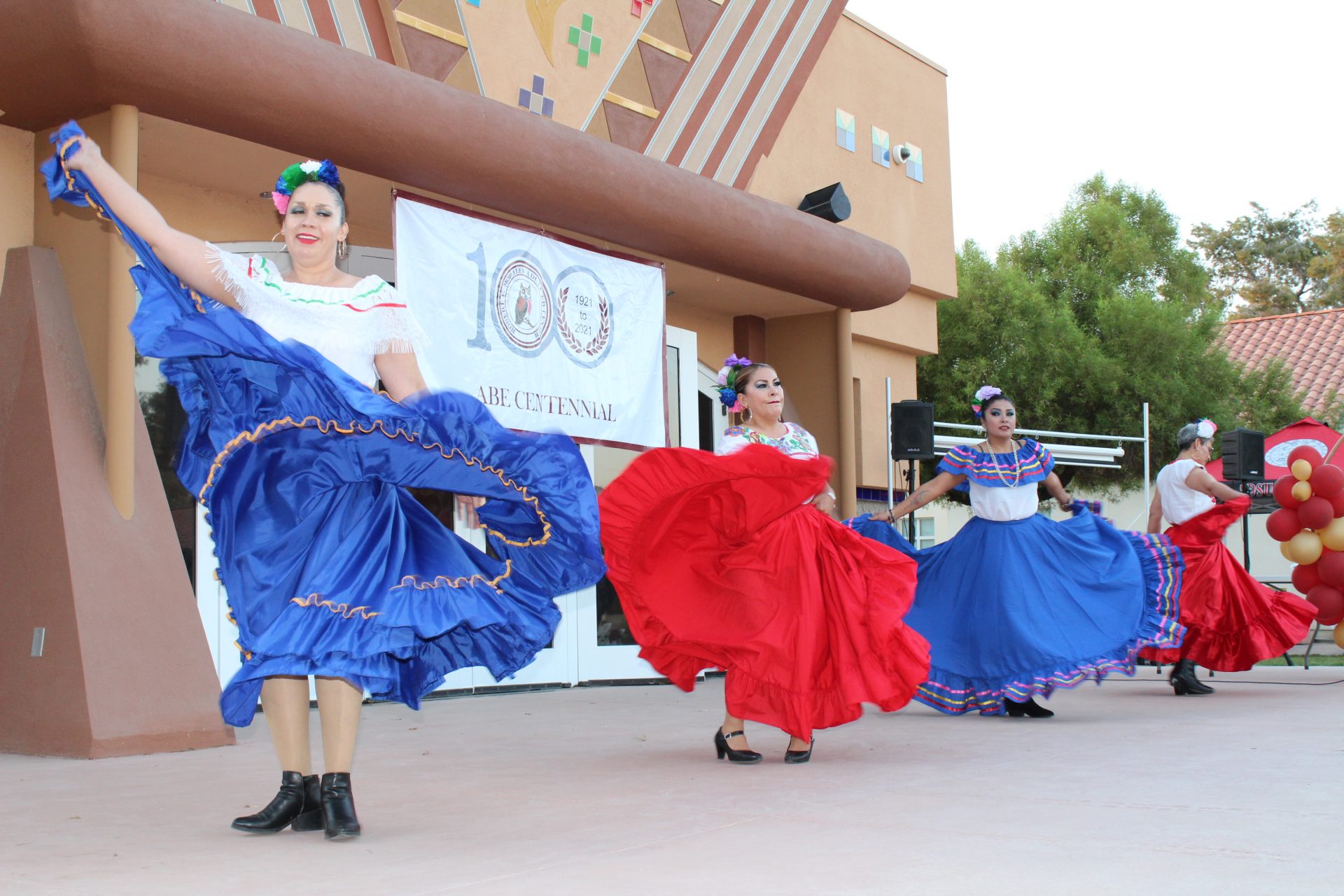 CALEXICO — As Maria Mendeola and Angela Covarrubias twirled and whirled with a group of folklorico dancers celebrating 100 years of adult education, they shared their stories of success as students of the Robert F. Morales Adult Basic Education Center.

“It is very interesting and important because I currently work,” Mendeola said of how the center has made a difference in her life. “They very much help me very much with my English.”

“For me, to speak English is very important,” Covarrubias added. “I think learning English might open doors for me in this country.”

The women were among a troupe of four who performed during the 100th anniversary celebration of the education center on Tuesday night, Oct. 5, at its original location on what is now the Rollie Carrillo Quad on the campus of San Diego State University-Imperial Valley in Calexico.

Staff, current and former students, school administrators, and the community gathered at the SDSU campus, the original home of the Adult Basic Education program in 1921 when it was the one of the early sites of Calexico High School.

The ABE center was renamed the Robert F. Morales Adult Education Center after the late Calexico Unified School District board member Robert Morales in August 1998. Morales was retiring after a 17-year tenure with the school board that year and was given the honor of having it named after him due to his dedication to the adult students of Calexico.

It has changed locations a few times over the years, grown and shrunk due to funding, but has managed to stay open according to program teacher Yesenia Campos. Right now, it is in a bit of a boom. Today, the Robert F. Morales center is located close to Aurora High School.

The program helps adults who are seeking higher education, whether it be earning their general education certification, English learning, or through a career technical path, said John Moreno, who is principal of Aurora High School and adult education director. Moreno added that the program is an essential part of the Valley and the lives of those who come through the center.

“Our goal is for our students to go from school to career, school to job, or school to higher education,” Moreno added. “We pride ourselves in hitting the 100-year mark.”

On Tuesday, a beginning ESL class sang, “This Land is Your Land.” Mendeola and Covarrubias were among four adult students who danced folklorico and even county Supervisor Ray Castillo sang and played guitar. Calexico Mayor Javier Moreno presented a proclamation from the city to commemorate the center.

A slide show at the end of the ceremony displayed pictures of the various locations the center and included newspaper clippings and videos.

Former teacher Celia Juarez was in attendance, happy and excited to get an invitation and proud to have been a part of the center. Juarez immigrated to the United States in 1985 and studied at Imperial Valley College and SDSU-IV to learn English and earn her teaching credential. She saw herself in the students she taught at the center.

“This institution has given a lot of opportunities for jobs and for the parents who want to learn the English language,” Juarez said “It is necessary, especially in small communities like this one.”

Currently, the program is held at Aurora in the afternoons and morning with 300 to 400 students enrolled in classes. Classes offered are GED, ESL, welding, and medical administrative assistant. The medical skills classes will be getting another distinction in January: medical administration assistant with billing and coding.

Many of the students are parents who look toward getting a higher education or learn English in order to help their children do better in school.

The ultimate goal of this program is to help students move onto the education that will push them in the right direction toward either college or a career.

The namesake’s son, Robert Morales Jr., thanked the community for coming together to honor not only the centennial but his father. Morales Jr. said one of the best lessons his father taught him was “always be nice to people, because it doesn’t cost you anything.”

“I’m honored that the citizens of Calexico still perpetuate his story,” the son said. “One thing I remember is my father never wanted recognition for anything.”

For center staff and the Calexico community, the centennial is proof that there is a need in the city and the Valley to increase opportunities.

Calexico Unified School District Superintendent Carlos Gonzales said the community has embraced the program and made it an essential part of Calexico. Gonzales said his own mother took classes through the center. He recalls her talking about her classes, telling him how important it was to become educated.

To see the centennial celebration, was very touching for him.

“For any district to say they have had an adult basic education program in the community for a hundred years is just a testament of wanting growth; not only for our students but for our parents as well,” Gonzales said.