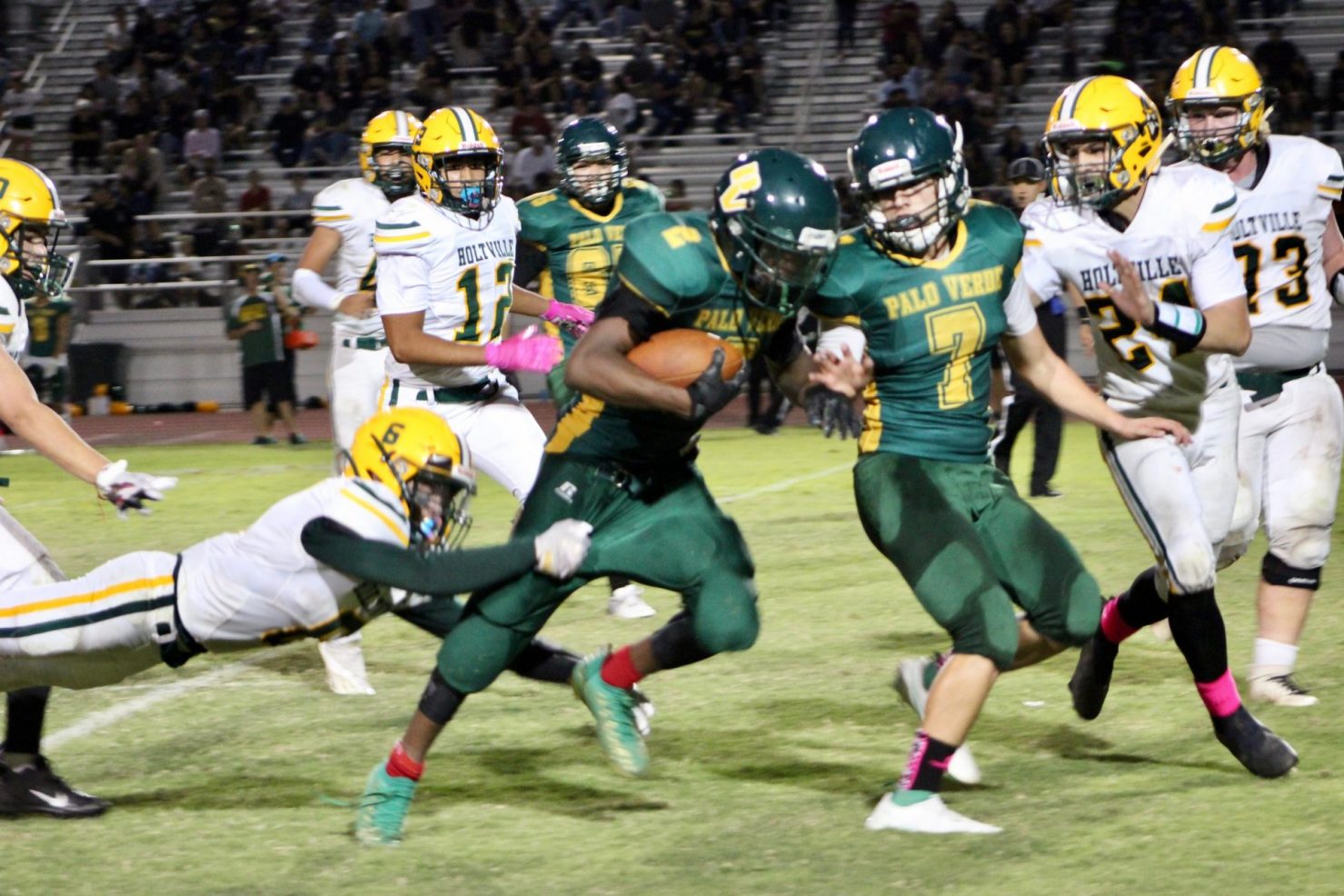 BLYTHE — In a matchup of two top-five teams in CIF-San Diego Section Division V, it was the Palo Verde Valley High football team and its dynamic running game that dominated Holtville, 40-8, in a key Desert League matchup here on Thursday, Oct. 7.

The Yellowjackets (5-2 overall, 2-0 in DL action) did anything it wanted on offense. The only thing that stopped Palo Verde’s rushing attack was the end of the first half and the end of the game.

The running game accounted for 405 yards and six touchdowns. Quarterback Rio Albanez attempted just one pass on the evening and it was dropped by his receiver.

Juniors Xavier Bejarano (20 carries for 148 yards) and Markus Macon (10 carries for 139 yards) did most of the damage on the ground, but it was senior Aizik Gonzales (11 carries for 88 yards) who got the Yellowjackets started with a 40-yard touchdown run on their first possession.

“This was just not a good matchup for us,” said Jason Turner, Holtville High’s fifth-year head coach. “We are not built to stop what they do best. The offense Palo Verde is running is tough to stop and those players are buying in and invested in it and they really make it work.”

Holtville (5-2 overall, 0-1 in DL) received the opening kickoff and had converted two first downs when disaster struck at its own 40-yard line. On a first-down rush, junior Daniel Ledesma fumbled and Palo Verde was there to pounce on the loose ball.

On the Yellowjackets’ first offensive play, Gonzales got the call and burst through the line and into the end zone for a 40-yard touchdown run. Gonzales tried the extra point but the kick was wide, as Palo Verde jumped ahead 6-0 with 8:20 left in the opening quarter.

Holtville went three-and-out on its next possession, punting the ball right back to Palo Verde with 6:58 left in the period. Seven plays and 51 yards later the Yellowjackets were adding to their lead after a one-yard plunge from Bejarano made it 13-0 with 3:01 left in the quarter.

Another Vikings’ three-and-out gave the ball back to the Yellowjackets with 29 seconds left in the opening quarter. A nine-play, 61-yard drive resulted in a Macon one-yard touchdown and widened the lead to 20-0

Holtville followed with its only productive drive of the game when the Vikings marched 65 yards in 12 plays with senior Donovan Johnston finishing it off with a one-yard touchdown run. Johnston had six carries for 36 yards on the drive as Holtville got within 20-8 with 1:23 left in the first half.

While Palo Verde was amassing 405 yards rushing, the Vikings’ rushing game was limited to 64 yards on 30 carries. Senior quarterback Spencer Hilfiker completed just 2-of-5 pass attempts for 22 yards and an interception, giving the Vikings a paltry 86 yards of total offense.

“Obviously, the fumble on the opening drive hurt us and then we got a little momentum late in the half with the touchdown,” Turner said. “Then we came out and tried to sneak in an onside kick to start the second half and just missed getting the ball.”

Holtville’s attempt at an onside kick failed as the Yellowjackets were able to jump on the bouncing ball at their own 45-yard-line. Three plays later Macon rattled off a 48-yard touchdown run to put his squad up 26-8.

Palo Verde sealed the game with an impressive 13-play, 72-yard drive that started with 33 seconds left in the third quarter and finished with 4:11 left in the game on a Xavier Gonzales-Pinon five-yard touchdown run.

The drive ate up more than nine minutes of game clock and featured no passes and 13 rushing attempts. When it ended, the Yellowjackets were up 40-8 with nothing really left except the handshake line.

“That’s a really good team over there,” Turner said about the Yellowjackets. “We needed this, honestly. That’s a playoff team that is going to do some damage come playoff time and we needed to see what’s in store for us come playoffs.”

Coming into the contest, Palo Verde was ranked atop the CIF-San Diego Section Division V power rankings, followed by Mission Bay at No. 2, and Holtville sitting in third.

Up next, the Yellowjackets host Southwest High of El Centro at 7 p.m. on Friday, Oct. 15, in a nonleague game with the Eagles.

For the Vikings, they will be hosting Vincent Memorial Catholic High of Calexico at 7 p.m. on Friday, Oct. 15, in another key DL showdown.

Next
Brawley Resident Injured in Shooting