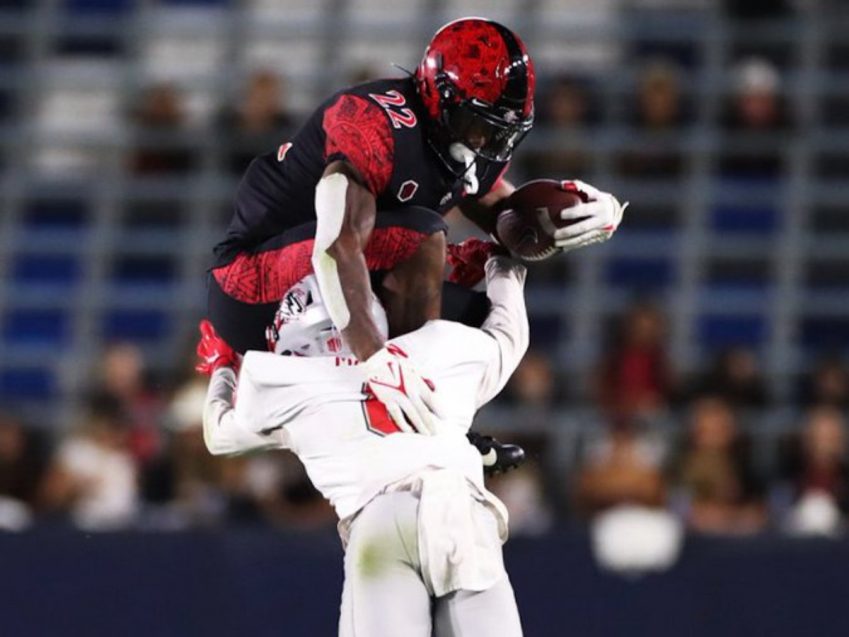 Bell again rushed for more than 100 yards, while Brookshire threw for 130 yards and scored on two touchdown runs as the Aztecs improved to 5-0. The running back and the quarterback had sat out recently due to injury.

The defense contained the Lobos (2-4), who only scored in the third quarter following a fumble by Bell. Quarterback Terry Wilson passed for 127 yards.

In all, No. 25 San Diego State held New Mexico to 193 yards of offense in their Mountain West opener.

Head coach Brady Hoke said he wanted his team “to start fast. I think on both sides of the ball that we did that.”

SDSU scored on their first drive, which Bell opened with a 40-yard gain. Five plays later, he ran one yard for the touchdown. The Aztecs padded the lead in the next quarter, on a Matt Araiza field goal and a Brookshire touchdown, for a 17-0 advantage at the half.

New Mexico made it 17-7, after linebacker Ray Leutele recovered Bell’s fumble and returned the ball 15 yards for a touchdown. San Diego State, though, added touchdowns in the third and fourth quarters to put the game out of reach.

Bell, though, did not return to the game after the fumble, with under five minutes left in the third quarter.

When asked if that was punishment or an effort to save Bell’s legs, Hoke said “a little bit of both. Obviously you can’t put the ball on the ground.”

The Aztecs have a short week to address the issue and ongoing concerns over penalties – they had five after the half. They return to action at 7:30 p.m. Friday, Oct. 15, when they hit the road to meet San Jose State (1-1).

(This story first appeared in Times of San Diego and is made available as part of the CalMatters Network.)