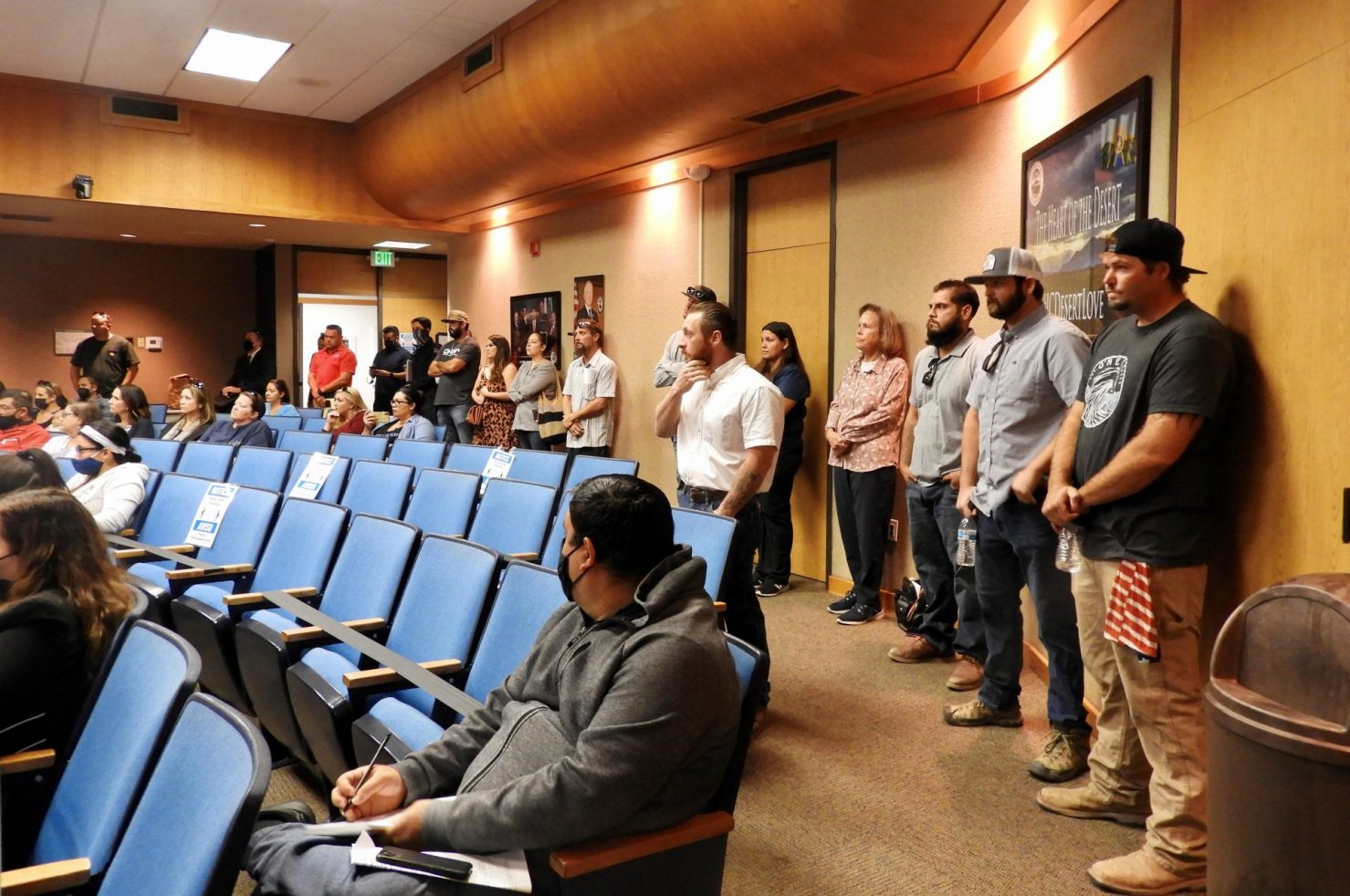 Mask mandate protestors line the back wall defiant of the health order stating masks should be worn indoors as many take their concerns to the Imperial County Board of Supervisors for a third straight meeting on Tuesday, Oct. 12. | MARCIE LANDEROS PHOTO
Home
COVID-19
In COVID-19Regional News

COVID-19 Cases on the Uptick in Imperial County, While the National Trend Moves Downward

EL CENTRO — A group of vocal detractors’ unrelenting opposition to Imperial County’s mask mandate has forced an opportunity to present the county Board of Supervisors with a full airing of its grievances.

Protestors against the county’s Public Health Order requiring masks be worn indoors no matter vaccination status lined the back wall of the county board chambers in El Centro and filled the public comment period of the meeting for a third straight week on Tuesday, Oct. 12.

District 4 Supervisor Ryan Kelley was moved to call for a special meeting to review the mask mandate and to hear the concerns of the community. Kelley’s suggestion came at the end of the meeting’s public comment period, after the protestors expressed frustration that only a portion of them were given the opportunity to speak.

“We will hold a special meeting, maybe Tuesday evening, and review the mask mandate, and there we will be able to listen to all your concerns,” Kelley said during the meeting.

As of Wednesday afternoon, Oct. 13, the county had not released a date for the special meeting but issued a statement.

“In an effort to provide members of the community ample time to voice their concerns regarding local regulations and guidance set forth by our Imperial County Public Health Officer and/or Imperial County Board of Supervisors, we are planning to host a special meeting that is solely focused on the weekly COVID-19 update and related activities,” wrote county spokesperson Gil Rebollar.

“The county is committed to ensuring that all have an opportunity to provide comment and to accommodate those who may be unable to attend our regular morning meetings,” he continued.

While the more than 10 protestors who spoke during Tuesday’s meeting each had their own explanation for their opposition — some of which have been reported by this newspaper for the past two weeks from public comments — many continued to focus on the lack of science to support the piece of personal protective equipment’s effectiveness, calling it dangerous at times, and even questioning county officials to this effect.

“A mask, right, fit more tightly around my nose, can it be more dangerous than good?” asked Imperial resident Jarred Reeves.

County Health Officer Dr. Stephen Munday refused to answer the question with a “yes” or “no,” explaining that the issue is more complicated than a one-word answer.

“I’m sorry. I’m not going to incriminate myself by answering a ‘yes’ or ‘no’ answer when you know it’s building bacteria,” said Munday in response.

Reeves continued to push for a yes or no answer from Dr. Munday, but Munday refused to budge.

“My answer is what my answer is. I’m sorry, but I’m not going to answer this ‘yes’ or ‘no,’” Munday said, standing firm.

The sole voice for those in support of the mask mandate belonged to Sky Ainsworth of El Centro. He thanked the county supervisors during the public comment period and held up handwritten signs of his own.

Creating an uphill battle for the protestors, Imperial County has experienced a significant increase in positivity rates in the last few weeks. On Sept. 28, the county reported a 7 percent positivity rate.

Imperial County’s uptick stands in contrast to the recent national COVID data. In 45 states, the rates of new COVID-19 cases either declined or stayed relatively steady this past week compared to the previous week, according to data Saturday, Oct. 9, from Johns Hopkins University.

Yet CNN reported that five states — Montana, Colorado, Minnesota, Michigan, and Pennsylvania — had at least 10 percent more new cases this past week compared to the previous week.

Imperial County currently has 435 active cases of COVID and has had 762 people die in the community, according to Oct. 12 data.

Next
Times Remains to Comment on Imperial County’s Redistricting