Calexicans Wary of Increase in Fires 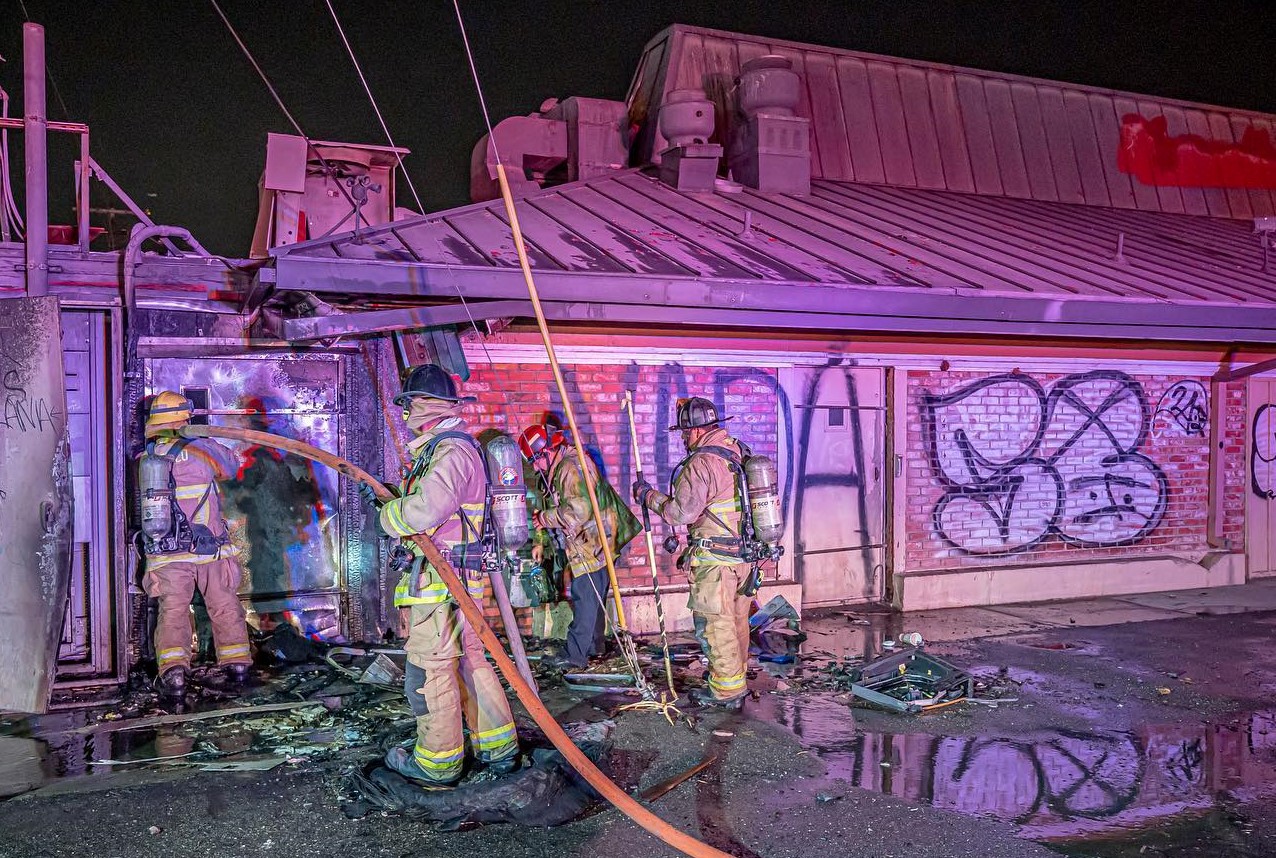 Calexico firefighters responded to a report of a trash fire at the old Pizza Hut located at 525 Imperial Ave. about 8:30 p.m. Saturday, Oct. 9. It was the second reported incident at the location on Saturday. | CAMILO GARCIA PHOTO
Home
Regional News
Share

CALEXICO — In the five years that 62-year-old Armando Garcia has been a resident of Calexico, he has enjoyed walks along the Imperial Avenue corridor near his residence by Lincoln Street and Harold Avenue.

More recently, he and his neighbors have also become preoccupied with reports that an apparent increase in arsons have been targeting vacant structures in the areas he frequents during his walks.

“I think there needs to be more vigilance,” Garcia, who speaks Spanish, said. “Buildings shouldn’t be left empty around here.”

Indeed, city officials are on high alert, the result of more than 30 reports of structure fires between March and Monday, Oct. 11 that are suspected of having been intentionally set to cause property damage.

In response to the rash of intentionally set structure fires, the Calexico Police Department has established a task force dedicated to apprehending the individual, or culprits, that may be responsible, Mayor Javier Moreno said.

“We got a lot of input from the community, who said ‘Enough is enough,’” Moreno said during a phone interview on Tuesday, Oct. 12. “Hopefully, soon there will be an arrest.”

The city is also planning to enhance its nuisance abatement ordinance, which would help expedite the cleanup and mitigation of properties deemed to be a public eyesore and safety hazard.

Though the city has been “lenient” in how it has enforced the ordinance in the past because of the economy’s poor overall conditions, Moreno said that will no longer be the case going forward, and more pressure will be brought on property owners who fail to comply.

“We do have the power to do that, but we haven’t approached it,” he said.

News of the reported increase in suspected arsons was slow to reach Roberto Neri, owner of the Fatima Casa de Cambio, and had come from a concerned customer just last week.

Nor was Neri aware that one of the more recent fires that was suspected of having been intentionally set occurred the night of Saturday, Oct. 9 at the shuttered Pizza Hut restaurant adjacent to his business, which is located at 539 Imperial Ave.

But after having observed a dried pool of water and the charred debris that fire officials had previously stated were deliberately piled up next to the building’s exterior and set ablaze, Neri became concerned anew.

In his estimation, the fires that appear to be plaguing vacant structures can be attributed to homeless individuals that populate the surrounding area.

To bolster his claim, Neri explained that about a year and half ago, he witnessed an Imperial Avenue business across the street catch fire. The incident was reported to the police, who were able to detain a man who witnesses alleged had been responsible.

“Right when the smoke started, he came out of the building,” Neri said.

In the past, Neri has had to call the police to disperse the homeless individuals who often congregated and used illicit substances outside the closed Pizza Hut restaurant that is near his business.

In one recent instance, a homeless man vandalized Neri’s vehicle when the former couldn’t remove a wastebasket that Neri had secured to a light post outside his business.

‘I Have a Dream’ Shouted from Courthouse Steps

“It has been a real problem for Calexico, the vagrancy,” he said.

Calexico’s police chief has stressed this idea that this barrage of suspected arsons is linked to the homeless is not a broad brush against them; rather, police and fire investigators believe it is a certain small number of suspects who are miscreants among a relatively harmless community.

To date, many of the intentionally set fires have been concentrated west of Imperial Avenue and south of Highway 98/Birch Avenue, though recent incidents suggest they have been creeping eastward, the Calexico Fire Department previously reported.

In the year or so that Citlali Moreno and her extended family have lived in the 300 block of East Sixth Street, an adjacent vacant residence has twice caught fire. The blazes were likely caused by the homeless individuals who regularly encamped there, she said.

And though the family would often call police to have authorities show the trespassers on their way, the individuals would always return.

“They boarded up the place multiple times, but the people would still get in,” said Moreno, in Spanish.

The most recent fire occurred about a few months ago, at a time when the family was away from home and only their pet dog remained inside. Upon returning later that night, the family encountered firefighters both battling the blaze and dousing the roof of their home with water to prevent it from catching fire, she said.

The second fire turned the abandoned residence into more of an eyesore, yet appears to have left the structure uninhabitable, which suits Moreno and her family just fine.

“There’s time when we can hear people passing through, but it’s less often these days,” she said.

Next
GILGAR: Privatization of the Space Race