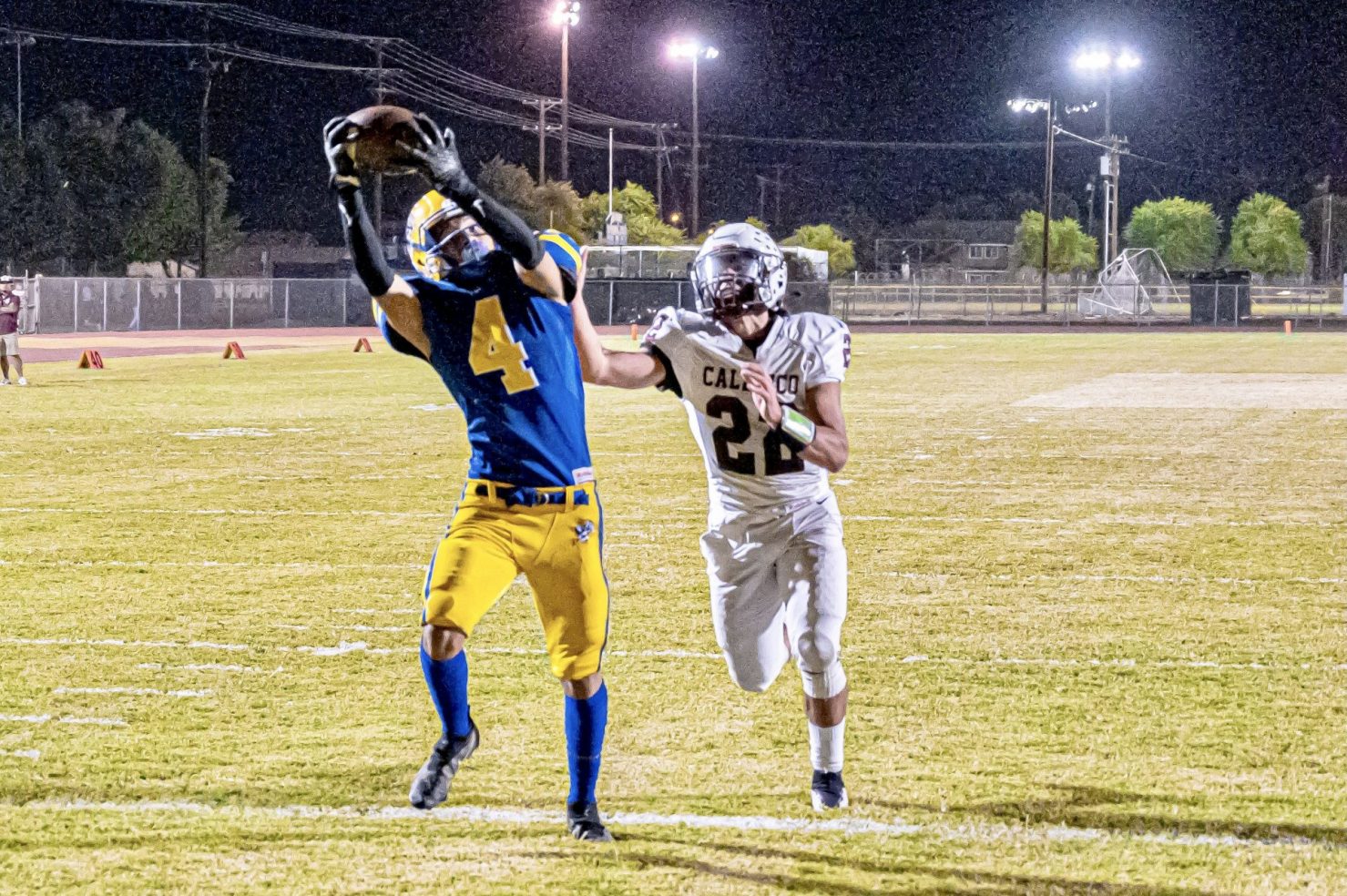 Brawley improved to 3-0 in the IVL and 7-2 overall with the win, putting the Wildcats in first place with two weeks now to prepare for the Bell Game at Central Union High on Oct. 29.

On the ensuing possession, Calexico went three-and-out and its punt traveled just nine yards giving Brawley great field position at Bulldogs’ 44-yard-line. Six plays later it was the Wildcats in the end zone again and up 13-0.

Trying to kickstart the offense on the next possession, Calexico junior quarterback David Esquer attempted a pass over the middle intended for junior Andres Ramirez that was intercepted by Brawley.

The tipped pass was returned to the Calexico 2-yard line and Brawley cashed in the error to go up 20-0 at the 2:16 mark of the first quarter.

“I think our early mistakes snowballed on us and took us out of the game,” said Fernando Solano, Calexico’s second-year head coach.

Calexico’s first big play of the night came later in the second quarter on a hand-off from senior quarterback Abram Zazueta to senior running-back Ernie Sanchez.

Sanchez zig-zagged his way through the Brawley defense, appearing trapped three times, before finally going down on the Wildcats’ 16 yard-line after a 41-yard gain.

“As soon as I get the ball and I’m able to break-out i look for my teammates and try to follow their blocks,” Sanchez said.

A bad snap on the next play resulted in Zazueta being sacked for a 17-yard loss and the Bulldogs eventually turned the ball over on downs.

Brawley then drove 70-yards in six plays with Gutierrez throwing another touchdown pass to give the Wildcats a 34-0 lead.

Brawley added another score but on the ensuing kickoff Bulldog junior Zeus Pradis had a nice return for Calexico. On the first play from scrimmage Sanchez erased any doubt the Bulldogs had surrendered as he weaved his way through the Brawley defense for a 47-yard gain.

That set-up Calexico’s lone touchdown of the game as Esquer found sophomore Andrew Rivera in the end zone on a 13-yard touchdown pass. Lorenzo Rodriquez added the extra point to make the score 41-7 at halftime.

“That’s one thing about these kids, they don’t quit,” Solano said. “At halftime we told them to forget the first half and to just keep going.”

Brawley took the second-half opening kickoff and drove 70 yards in seven plays to finish the scoring.

Calexico had several opportunities to get on the scoreboard in the fourth quarter. The first came when sophomore Jonathan Pacheco launched a punt that Brawley muffed and junior David Rivera recovered, plus the Bulldogs recovered a Wildcats’ fumled handoff with senior defensive-back Raymundo Jacquez jumping on the loose ball.

After the game Zazueta summed up the loss in a few words.

“We’re going to focus on the next two games … we’re going to practice hard and eliminate mistakes to be competitive,” Solano said.

(This story was updated at 9 a.m. Friday, Oct. 15, to reflect the correct Calexico High student to score the team’s only touchdown of the night, sophomore Andrew Rivera.)