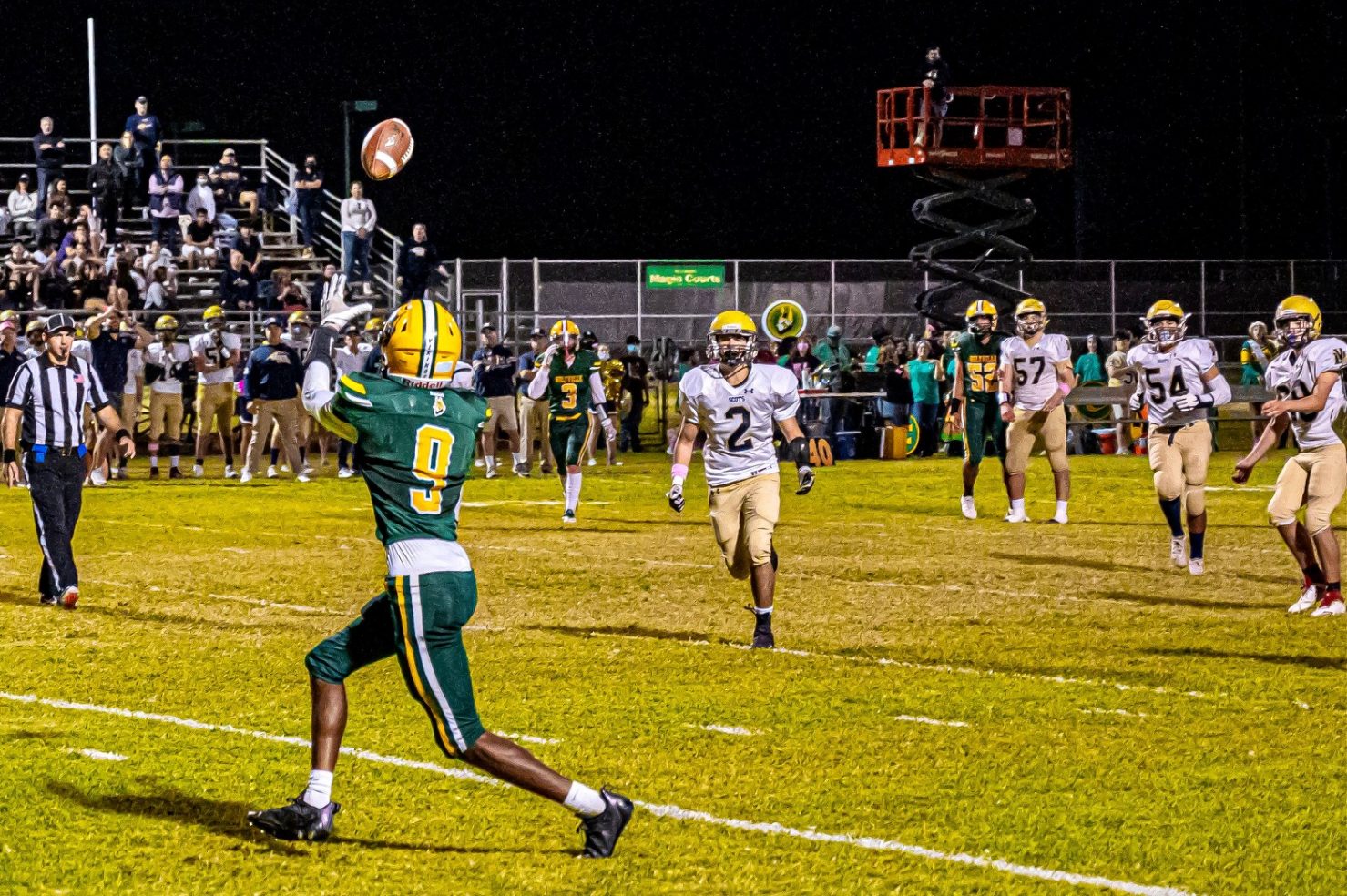 Holtville High senior receiver Dorian Maize (9) is wide open as he hauls in a touchdown pass from senior quarterback Spencer Hilfiker late in the first half of the Vikings’ Desert League game against Vincent Memorial at Birger Field in Holtville on Friday, Oct. 15. | CAMILO GARCIA JR. PHOTO
Home
Sports
In Sports

The Vikings (1-1 in the DL, 6-2 overall) hadn’t won a game in almost a month after a home loss to Imperial on Sept. 30 and a road loss in Blythe to Palo Verde Valley High on Oct. 7.

In the DL standings, Holtville sits in third place, behind league-leading Palo Verde (2-0 in DL, 6-2 overall), and a half-game behind Vincent Memorial (2-1 in DL, 5-3 overall).

“Tonight we made a few mistakes but we focused on doing what we do best, running the football,” said Jason Turner, Holtville’s fifth-year head coach. “We hit a few passes in the first half and it opened up our running game in the second half.”

Holtville senior quarterback Spencer Hilfiker threw three first-half touchdowns, finishing the game completing 3-of-7 passes for 75 yards with three touchdowns and two interceptions. Two of the touchdown passes went to senior Roger Rolfe and the third went to senior Dorian Maize late in the first half.

“They were really pinching in to stop the run,” said the 18-year-old Rolfe. “On the first touchdown I had the corner route and once I got past the corner I was wide open.”

The two teams traded interceptions on the first three possessions with the Scots twice turning the ball over inside the Vikings’ 30-yard-line.

Holtville capitalized on the second interception when Hilfiker finished the six-play drive with a 17-yard touchdown to Rolfe. The two-point conversion put the Vikings up 8-0 with 1:24 left in the opening quarter.

“We have a young team and maybe we came out a little nervous because we are here in Holtville and we know they have a tough team,” said Fernando Santana, Vincent Memorial’s assistant head coach. “It wasn’t until the fourth quarter that we started doing the things we needed to.”

The Vikings ate up more than five minutes of game clock on their next drive, going 70 yards in 14 plays, (13 rushing, one passing) with senior Donovan Johnston finishing the drive with a one-yard touchdown run. The two-point conversion put the Vikings up 16-0 with 7:22 left until halftime.

The Vikings weren’t done scoring, adding a 26-yard touchdown pass from Hilfiker to Maize with 44 seconds left until halftime to give Holtville a 29-7 lead at the break.

“I don’t know if they didn’t see me or what happened but there was no defender on my side of the field,” said the 17-year-old Maize about the wide open scoring catch and run. “It was supposed to be a running play but we all saw there was nobody in front of me.”

The Vikings seemingly put the game away on the opening play of the second half when Johnston got his second touchdown on a 65-yard sprint down the sideline to open up the lead to 36-7.

Vincent Memorial fought back with three touchdowns in the fourth quarter, including two scoring strikes from Elias and a blocked punt in the end zone that was recovered by senior Esteban Sanchez.

“We knew coming in they were going to throw the ball a lot and we had to stay disciplined on defense,” said Maize, who had one of the four interceptions for the Vikings. “When he (Elias) is rolling to his right he has a real good arm, but rolling to his left I knew the throw wasn’t going to be as strong and I was able to intercept it.”

Vincent Memorial travels to Blythe for a DL-matchup against Palo Verde Valley at 7 p.m. on Friday, Oct. 22.

Up next, Holtville will be hosting DL-foe Mountain Empire of Pine Valley at 7 p.m. on Friday, Oct. 22, in the Vikings’ homecoming game.