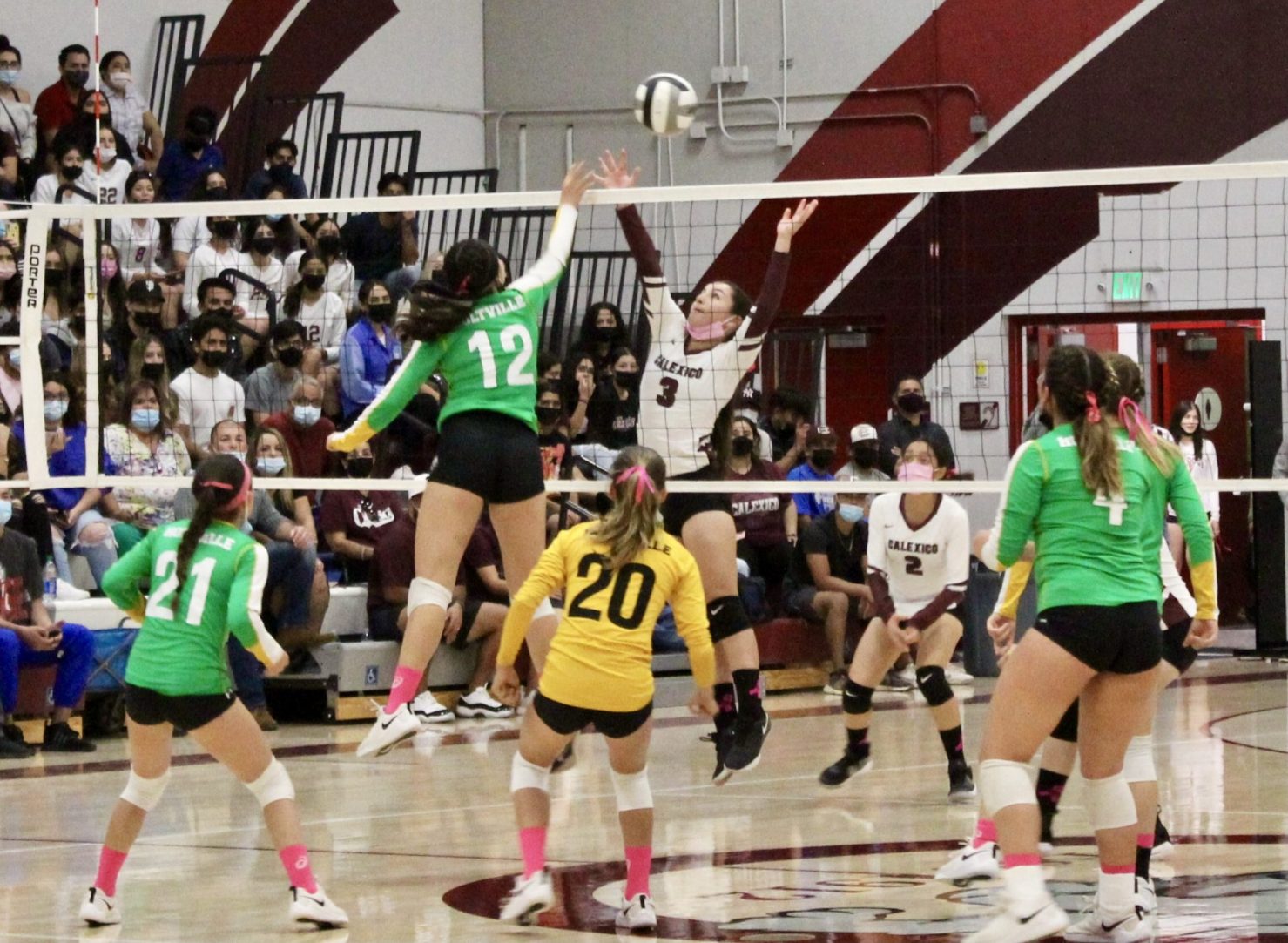 Holtville High senior Orian Anderson (12) goes up for a ball at the net against Calexico’s Andrea Lopez (3) during their Imperial Valley League match at Varner Gym in Calexico on Thursday, Oct. 14. | CATHI PHILLIPS LARIOS PHOTO
Home
Sports
In Sports

BRAWLEY — In front of a packed house and raucous crowd, the Holtville High School volleyball team claimed the Imperial Valley League championship with a 3-1 victory over Brawley Union High here on Saturday, Oct. 16.

“We didn’t even talk about IVL before the match,” said Mariana Garewal, Holtville’s assistant head coach. “We told them to just have fun and celebrate each other and elevate each other.”

Garewal, who has coached a majority of the girls since about 2013 through the Holtville Volleyball Club, had no problem stepping in for the match with head coach Chelsey Strahm unable to attend after giving birth on Friday, Oct. 15.

The full gym, Brawley band and boisterous fans might have given the Wildcats the edge in the first set, but wasn’t able to stop Holtville’s momentum in the second and third sets. The Vikings were able to extend rallies and seemingly got to every hit the Wildcats could deliver.

“It really is their expertise,” Garewal said. “You can watch and see they are always shifting to where the ball in going to go.”

In the final set, Holtville had a comfortable lead only to see Brawley rally back and make it close. Leading 24-22, Vikings’ senior Orian Anderson got the final hit to finish the match and clinch the league title.

At the service line, it was junior Sofie Irungaray delivering four aces and also dishing out 56 assists from her setter position. Sophomore Vanessa Gonzalez made her presence felt with six blocks at the net.

In the final set, the Vikings rallied from a 17-7 deficit to come back and finish the match.

“They are all so seasoned and competitive that they never feel they are out of a set,” Garewal said. “Even if they aren’t hitting well, their defense and their passing will keep them in most sets.”

Holtville, currently ranked No. 1 in CIF-San Diego Section Division IV, has its IVL-finale set for 7 p.m. on Thursday, Oct. 21, in the Vikings’ gym. CIF-SDS playoffs are scheduled for the following week.