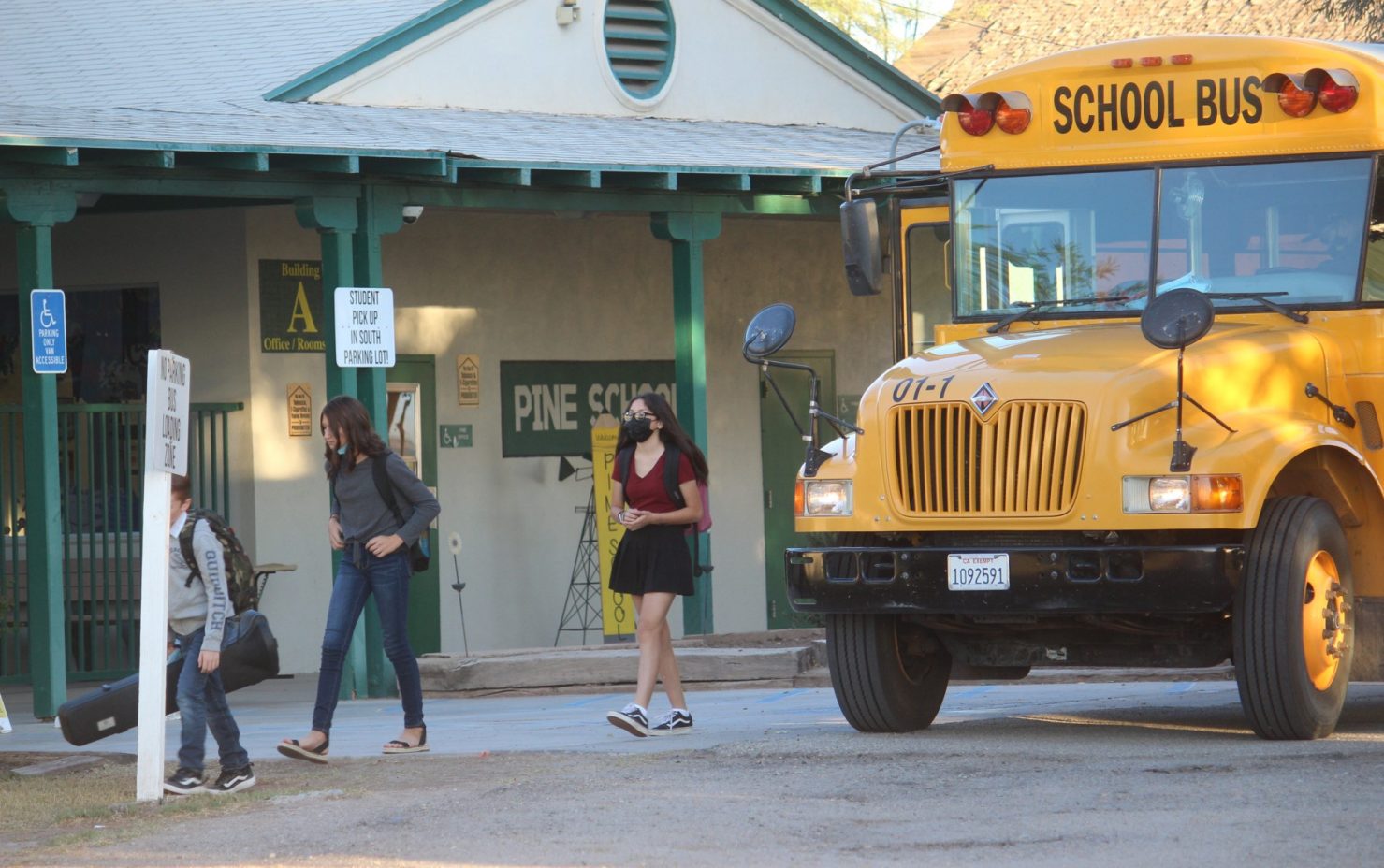 Students get off a bus on Tuesday morning, Oct. 19, and walk toward their classes at Pine School in Holtville. About 30 percent of the students in the Holtville Unified School District stayed home on Monday, Oct. 18, the same day as a statewide school walkout to protest vaccine and mask mandates for students and staff throughout the state. | MEGAN JONES PHOTO
Home
COVID-19
In COVID-19EducationLocal News

High Number of No-Shows Coincide with Statewide Walkout; 426 Students Did Not Attend

HOLTVILLE — Data from local school districts was incomplete, yet it does appear Holtville was ground zero in terms of impact from a statewide protest to compel parents to keep their children home on Monday, Oct. 18.

“I don’t have ‘official’ numbers as our attendance figures really aren’t finalized until the end of the school day,” Holtville Assistant Superintendent John-Paul Wells wrote in an email on Oct. 18 midday.

“We have a total of 426 absences today (Monday), or about 28 percent,” Wells stated. “This is roughly about four times our normal number of absences.”

Anecdotally, it appears nearly every community had its cluster of school no-shows due to what was billed as a “statewide school walkout” to protest vaccine and mask mandates, but Holtville Unified School District’s numbers were particularly high on a day when the school board convened a meeting in the high school gymnasium later that evening in which parents, students, and staff maintained their opposition.

By comparison, Calexico Unified School District Superintendent Carlos R. Gonzales said in an emailed statement that attendance numbers were comparable to Monday, Oct. 11. “The current total enrollment for CUSD TK-12th grade is 8,591 students. … Please note that the absences for Monday, October 18, 2021, are still being verified,” according to his statement.

Imperial Unified School District Superintendent Bryan Thomason did not have exact numbers for attendance (4,502 students were enrolled in 2019-2020) when contacted on Monday and Tuesday, Oct. 19, but he told this newspaper there were more absences than a normal Monday.

For Brawley Elementary School District Superintendent Richard Rundhaug, he said 47 absences in the school district (4,187 students, 2019-2020) were specifically attributed to the protests, with school staff absences comparable to any other Monday.

During Monday night’s Holtville board meeting, the majority of comments from parents asked that the board not go along with the rest of the state as it did in August, when the board first voted 4-1 to not enforce mask mandates for students and staff but later changed its vote. Trustee Jared Garewal opposed the initial measure. When the board voted 4-1 a week later to rescind the first decision, Trustee Robin Cartee was the opposition that time.

“If you guys vote, make it required; a lot of students won’t attend and you guys will lose a lot of money,” said a Pine School sixth-grader with the last name Peaks (her first name was inaudible). “We don’t want to give our freedom and our right to choose what is best for us.”

Pine School appeared to be one of the schools most affected by the walkout. One parent told this newspaper that in their child’s class of at least 20 students only eight attended on Oct. 18.

No one answered the Pine School phones later in the day Tuesday.

Meanwhile, Holtville Unified board President Ben Abatti told parents present at the meeting that the board will continue to fight for its schools and the students.

“There are things in the works, and we are hoping to fight this thing, but it’s going to take a lot of people, so don’t give up,” Abatti said.

Several of the parents who spoke Monday night, as well as Trustee Cartee, attended and spoke at a COVID-19 community forum held by the county Board of Supervisors and the Public Health Department on Tuesday night in El Centro.

The data will be added as it becomes available.

Earlier this month, Gov. Gavin Newsom issued a new mandate for students that will require COVID-19 vaccinations in order to attend school. These requirements will be phased in starting with those age 12 and older, and then for kindergarten through sixth-graders only if the U.S. Food and Drug Administration approves a vaccine for that age range.

Parents around the state have protested since, culminating in Monday’s walkout by students and teachers.

In reports around the state, Sacramento saw more than 1,000 people march on the state Capitol. In San Francisco to San Diego, students were held from schools.

“We understand that families and students may have strong emotions and questions about COVID-19 safety measures, including vaccine and testing requirements. However, keeping children home from school to protest a COVID-19 vaccine requirement announced by Gov. Gavin Newsom, as posts on some social media outlets are suggesting, would only result in lost learning time for our students,” a statement from San Marcos Unified School District read in response.

Previous
A Suspected Calexico Arsonist is in Custody; No Suspicious Fires Since