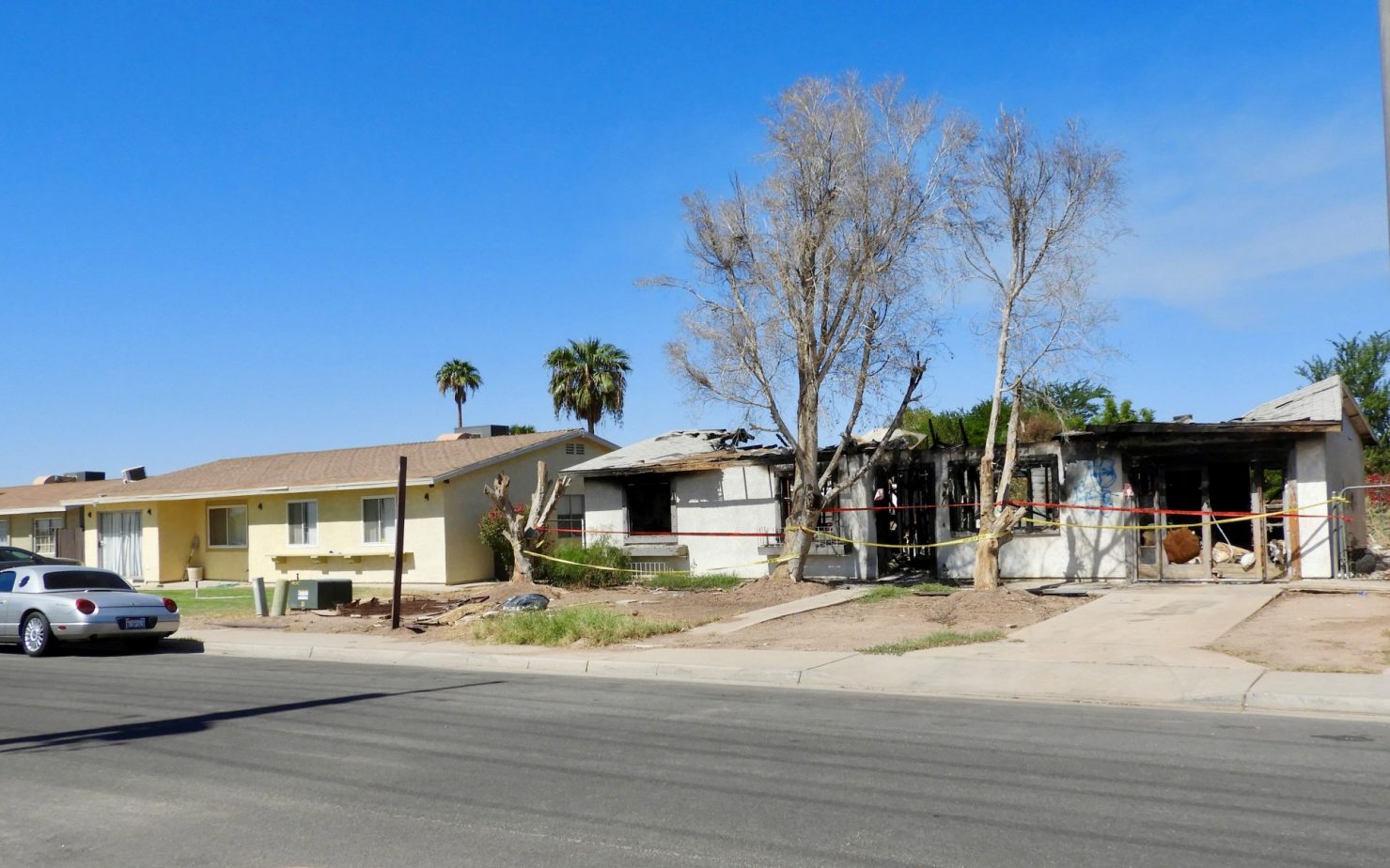 The charred remains of a vacant house at 629 W. Canal St. in Calexico sit one house over from the home Linda Garwood has owned since 1979. Garwood has been contacting the city for some time over the state of the property, which was destroyed by a fire on Sept. 28. | MARCIE LANDEROS PHOTO
Home
Regional News
In Regional News

After Linda Garwood Warned City Officials of House Next to Hers, Fire Destroyed the Dwelling

CALEXICO — As the city has spent the last several weeks under siege due to dozens of suspected arson fires over the past six months, a homeowner on Canal Street is demanding answers after repeated requests that a vacant house next to hers be addressed.

Calexico native and homeowner Linda Garwood, who now lives in San Diego but rents the home she bought in 1979 to her 21-year-old granddaughter and her granddaughter’s boyfriend, nearly lost that home on Sept. 28 when it was threatened by a suspicious blaze.

Despite months of contacting city officials to address concerns at the vacant dwelling directly next door to hers in the 600 block of Canal Street, the structure caught fire and nearly took her family home with it.

“I still consider this my home; it’s our family home. I just want my family, especially my granddaughter, to be safe,” Garwood said during an interview in their home on Oct. 1. Her daughter, Lehila Estrada, also was present.

This comes just 13 days after Garwood made her concerns public when she called in to a Calexico City Council meeting via Zoom on Sept. 13 to read from an email she wrote to the council to plead for help and to air her grievances over a lack of answers from the city in addressing the state of the vacant property.

Garwood said during those Zoom comments that she had been contacting city officials for some months over the situation prior to the fire, sharing that although the property was vacant, she was able to find out that someone had been keeping up property-tax payments on the house.

She also shared that had her granddaughter not been home when the fire broke out, the house would have been destroyed.

The Sept. 28 fire was unrelated to the suspected arsons being investigated around the city, Calexico Fire Chief Diego Favila stated in an Oct. 5 email to the Calexico Chronicle.

The suspected arsons being investigated were intentionally set to cause property damage, which fire officials do not believe was the case at the Canal Street address.

Favila indicated any further response would be from city code enforcement pertaining to vacant properties.

As of Oct. 5, no other city officials had reached out to Garwood or her daughter, who left home two years ago to move to Imperial. Garwood confirmed on Wednesday, Oct. 20, that the city had sent her a complaint form to fill out that she requested in September but nothing beyond that.

Estrada during the interview said she often would call the police about suspicious activity inside or around the vacant house, which she said had been empty for 18 years.

Estrada said she warned city officials about the likelihood of fires at the location.

“The time before, this was Jan. 30. I called the Police Department on the 25th, 26th, and the 27th, and left messages. No one called back,” Estrada told a reporter. “Finally, I talked to Sgt. (Armando) Orozco, and I said to him. ‘There’s going to be a fire. It’s cold, and they’re going to start a fire,’ and that happened on Saturday (Jan.) 30th.”

The women indicated there had been multiple smaller fires at the location preceding the larger Sept. 28 fire.

Estrada said the issues with the vacant property began five or six years ago, when she returned home to find evidence of a fire on the dwelling’s fence.

“No one was home when it happened, but when we got home, we noticed a big black spot on the wooden fence, where there had clearly been a fire, but someone managed to put it out,” she said.

The family started to see people go in and out of the house at all hours, and even going so far as to walk along the front of Garwood’s property in the middle of the night and shouting at Estrada’s daughter when she tries to leave the house.

The granddaughter who lives in the house declined to be interviewed and asked not to be identified.

This constant activity led Estrada and Garwood to invest in a home security system around the house, including security cameras, but it seemed to make no difference in stopping the activity.

“There was one occasion that a girl confronted my daughter in the front yard. She just popped out of nowhere, but she had been going in and out of the house before,” Estrada said. “I called the Police Department, and I gave him the description and everything. What they were saying was that there was no crime. No crime happened so they can’t arrest anybody because they’re not trespassing because nobody’s there to say that they’re trespassing in their home.”

Garwood, who has been unhappy with the response from the fire and police departments, reached out to the Calexico City Council via email, and on Sept. 15 read her email during public comments, focusing on the history of fires at the home and the proximity of the house to Garwood’s property.

“This house has been an eyesore and a danger to my house and others since we are only five feet apart. This situation has to be addressed by the city, at this point we are requesting a complete removal of the debris which will continue to be a fire hazard and a public nuissance (sic),” the text of her email reads. “I am holding the city responsible for any future incidents regarding this property at 629 W. Canal St.  Thank you.”