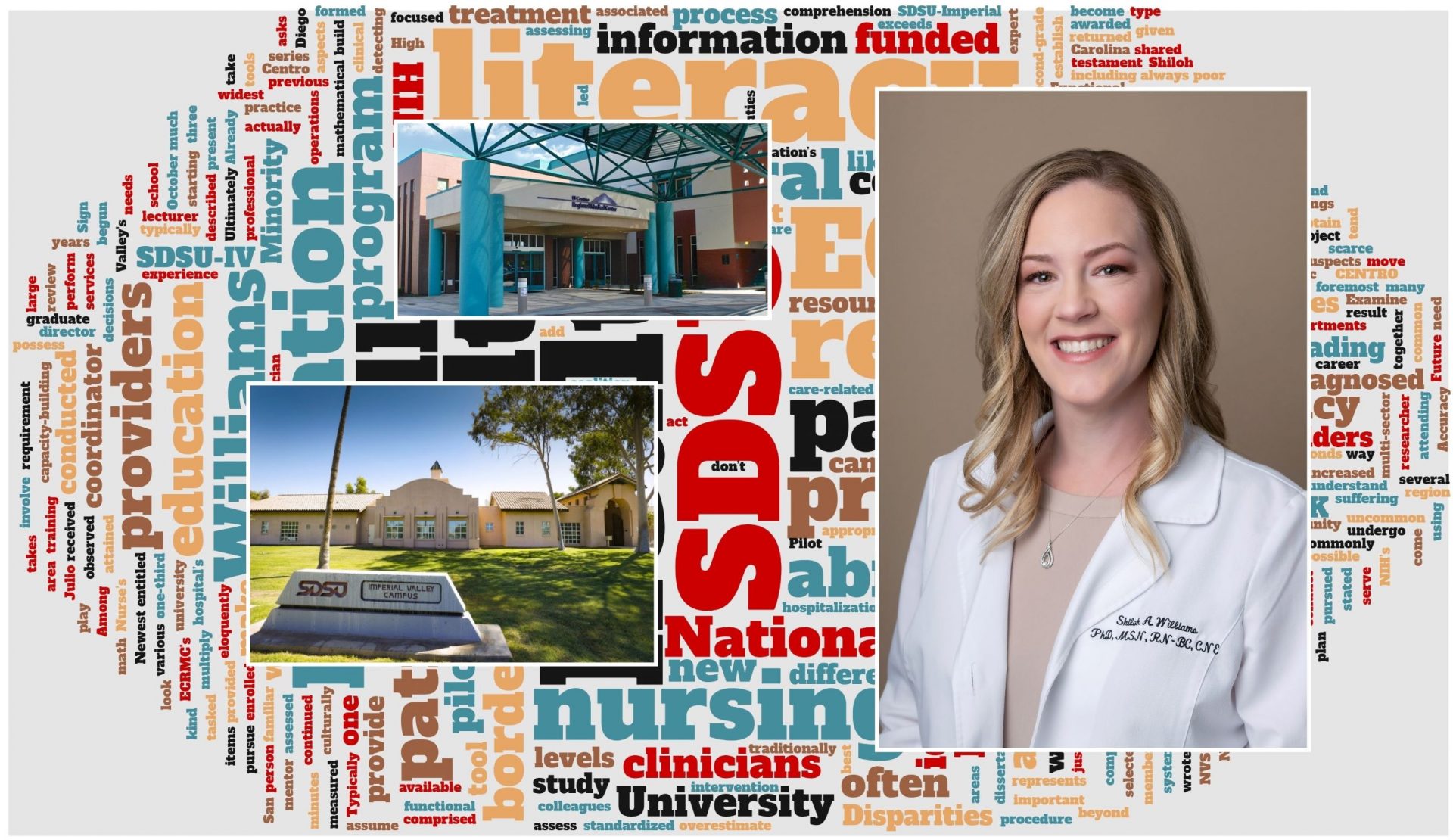 EL CENTRO — Among the many duties that local healthcare providers are tasked with, assessing a patient’s health literacy level has traditionally not been a constant requirement.

But that is expected to soon change at El Centro Regional Medical Center, where patients in the hospital’s various departments will soon have their health literacy levels assessed by clinical staff.

The practice will be undertaken starting Nov. 1 as part of a pilot project that is being funded by a $50,000 grant that the San Diego State University HealthLINK Center was awarded by the National Institutes of Health.

The research project will be led by Shiloh Williams, ECRMC director of research and SDSU-Imperial Valley nursing community liaison and nursing program lecturer. The study will examine patient education materials and health literacy levels of the Valley’s rural border population and involve staff and patients at ECRMC.

The project will build on health literacy research that Williams conducted as part of her doctoral dissertation while at Walden University and look at how healthcare providers recognize a patient’s lower level of health literacy.

“We don’t do a good job detecting that,” Williams said. “We tend to overestimate our patients’ ability.”

Health literacy is described as an individual’s ability to obtain, process, and understand the basic health information and services that are needed to make appropriate health decisions.

From her past research and professional experience, Williams has observed that healthcare providers typically do not always assess a patient’s health literacy level and often provide patients with information that exceeds their comprehension.

That trend is more common in rural areas such as the Valley, where resources are scarce and socioeconomic issues often play a large part in patients’ health outcomes.

Low health literacy is associated with poor health outcomes, lower rates of compliance with treatment and increased hospitalization rates, Williams wrote in her presentation titled “Accuracy of Medical-Surgical Nurse’s Prediction of Patient’s Health Literacy Level” that she shared at a Walden University Research Conference in October 2020.

Already, Williams has begun training staff at ECRMC to conduct health literacy assessments using the Newest Vital Sign (NVS) standardized assessment tool. The assessment tool takes about three minutes to perform and asks a series of questions to determine a patient’s ability to read, write and do basic mathematical functions like add, subtract and multiply.

“It’s kind of a testament to their belief and feeling that health literacy will be very important in their operations,” Williams said about ECRMC’s participation in the pilot project.

“No one has actually measured the health literacy level of this (local) population,” Williams said.

To reach the widest demographic possible, healthcare-related materials should be written at the second-grade reading level. Yet, it is not uncommon for clinicians to provide patients with materials that are written at a much higher reading level, Williams said.

Nor should healthcare clinicians assume that just because a person can speak eloquently and has attained a higher degree of education that they possess a higher level of health literacy, she said.

Typically, health literacy assessments are conducted when a clinician suspects that a patient has a low literacy level or when a patient is diagnosed with a new disease, given a treatment plan or about to undergo a medical procedure, Williams said.

As part of the study, which is funded through May 2023, Williams and research colleagues will review commonly available healthcare education materials that patients are often provided to determine whether the items are appropriate for the local population.

Future studies are also expected to help identify what work is needed to meet the health literacy needs of the local population, she said. Doing so will require both community members and healthcare providers to come together to identify resources and tools to make sure materials are culturally competent and meet the context of the rural border community.

A literacy assessment can also help determine whether a patient should be enrolled in a new educational program when diagnosed with a new disease. Ultimately, in may take anywhere from five to 10 years to figure out what type of health literacy intervention may work best for the local population, Williams said.

After attending nursing school in South Carolina, Williams returned to the Valley where Hoyt continued to serve as her mentor while she pursued her master’s degree in nursing education from Walden university.

With her research on health literacy, Williams has the opportunity to move beyond her current roles as an educator and researcher and become the nation’s foremost expert on health literacy in the rural, border region, Hoyt said.

“It’s rare that you get studies like this in a rural, border area,” she added.

The research project was selected by a local multi-sector coalition of stakeholders that had been formed as a result of a previous NIH National Institute on Minority Health and Health Disparities grant, Hoyt said.

The research project also represents a focused effort by NIH, SDSU and local stakeholders to establish a system that fosters capacity-building and sustainable infrastructure at the local level.

Next
GILGAR: Coach Gruden Back on TV Already?