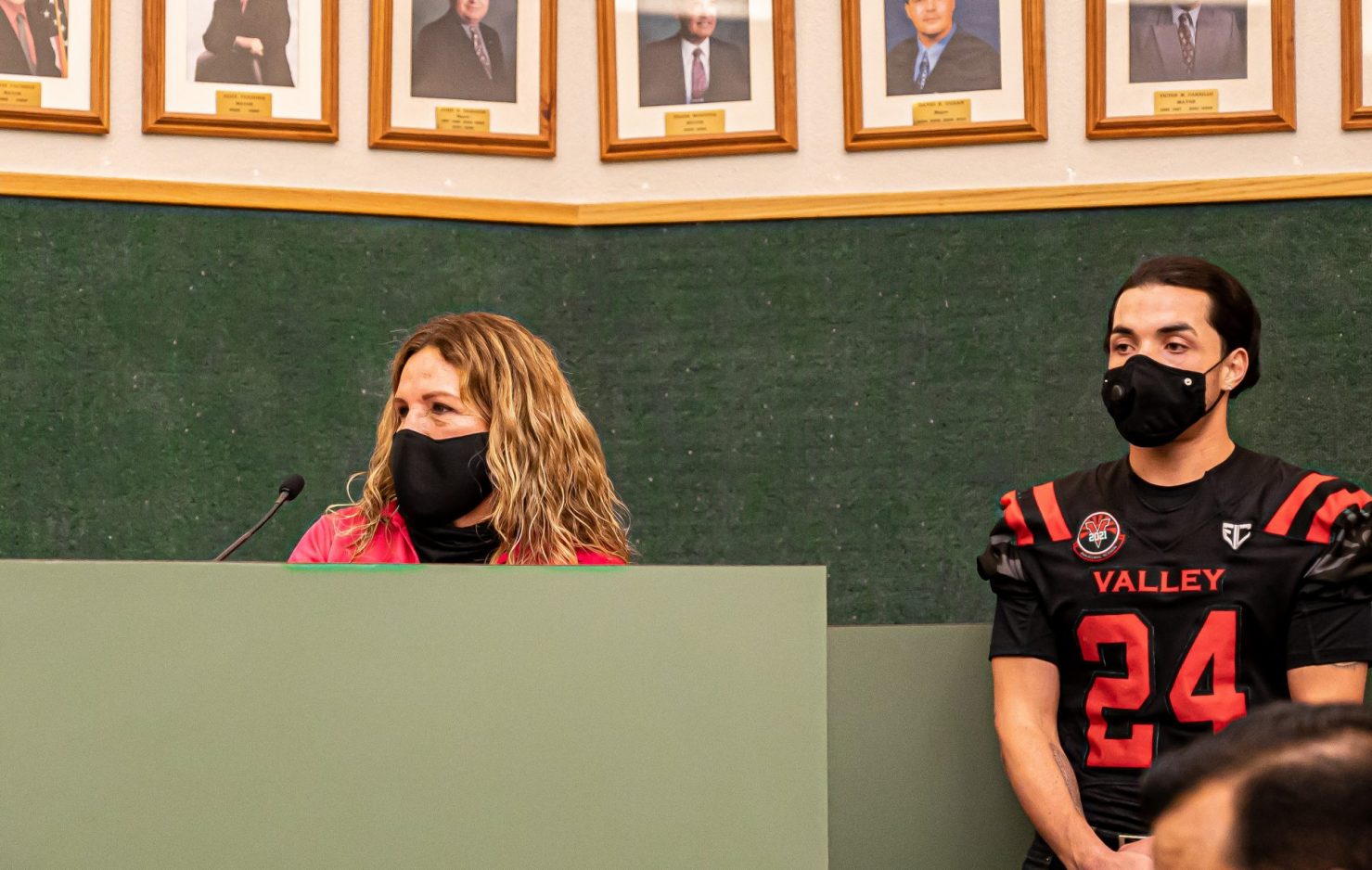 Carmen Estrada, Calexico Parents Athletic Association founder and president, stands next to a CPAA athlete during the Calexico City Council meeting on Wednesday, Oct. 20, where for the second meeting in a row she asked the city for help in finding more park space for her 1,300-strong youth soccer league. | CAMILO GARCIA JR. PHOTO
Home
Regional News
In Regional News

CALEXICO — In terms of size and prestige, the Calexico Parents Athletic Association’s youth soccer league enjoys a reputation unlike any other in the Valley and surrounding region.

Yet, that same popularity has made it challenging for its 1,300 participants to find adequate space in Calexico to compete, said Carmen Estrada, CPAA founder and president.

But with the city’s assistance, the association is hoping some of its suggestions can be adopted to help avoid any disruptions to the league’s scheduled games, Estrada said during the City Council meeting on Wednesday, Oct. 20.

“It’s the largest league around and it shouldn’t disappear because of a lack of playing fields,” Estrada said in Spanish.

Her heartfelt plea was largely a replay of a similar appeal she made before the council during its Oct. 7 meeting. As then, council members again vowed to work with Estrada and the association to address its concerns about a lack of adequate playing fields in the city.

One possible solution that did emerge from the most recent council meeting was council member Raul Ureña’s suggestion that the city considers using American Rescue Plan Act funds to help resolve the problem.

ARPA funds are distributed by the federal government to help cities mitigate the impact of the COVID-19 pandemic. Calexico has been allocated about $9.5 million in ARPA funds.

Ureña’s suggestion prompted City Manager Miguel Figueroa to state that he has spoken with Public Works manager Liliana Falomir about the possibility of using some ARPA funds as requested.

“We’re looking as to how we can make this happen,” Figueroa said. “We will certainly follow up on this matter.”

Ongoing talks between CPAA and city officials are also expected to help address concerns about flooding at Daniel Gutierrez Field, as well as safety issues that league participants have encountered because of speeding motorists on the streets surrounding the playing fields on gamedays.

Additionally, the city is exploring the possibility of waving park use fees for individuals or entities that are participants of the city’s Adopt-A-Green-Area, of which the Calexico Parents Athletic Association and Estrada, as an individual, are a part.

The proposed gesture is a show of support for Estrada’s decades-long efforts on behalf the community’s youth and recreational activities.

Prior to founding CPAA, Estrada had been an integral part of its predecessor, the Calexico Police Athletic League, which dissolved in 2009. Its demise had prompted Estrada, a retired social worker, to use about $20,000 of her personal savings to found the Calexico Parents Athletic Association shortly after.

Despite her many concerns, Estrada made it clear that she was confident that by working collaboratively with city officials and other supporters, such as the Imperial Irrigation District, good things were sure to come for CPAA.

“I think we have the votes right now to unite the city with the community to obtain something big and true,” Estrada told the council.

That many city officials hold Estrada in high esteem was evident during the Oct. 20 meeting.

“We’re going to do everything possible to be able to do what you’re asking of us,” council member Rosie Fernandez told Estrada in Spanish during the latter’s presentation to the council.

Fernandez’s remark came in response to Estrada’s disclosure that the association could no longer continue to dedicate as much of its resources as it has on rehabilitating the fields it uses for games, many of which are retention basins.

The association sustained a significant setback when Gutierrez Field flooded just one day after CPAA had completed extensive work to level and plant grass at the field, at a cost of about $1,200.

“We can no longer invest in sites that are not true fields,” Estrada said. “For us, that’s a lot of money, but we did it.”

Previously, the city had installed a water valve that was intended to alleviate any flooding issues at Gutierrez Field, located at Andrade Avenue and Santa Fe Street. Since the flooding incident, it has discovered that additional valves, which have a cost of about $50,000 each, are needed to fully resolve the issue, city officials said.

The Calexico Parents Athletic Association is also calling on the city to expedite ongoing construction at Cordova Park, so that league soccer play can commence at the start of the year.

Council member Gloria Romo was also quick to praise Estrada for her years-long efforts during the council meeting.

“You do things that would be impossible at this time and in the past for the city to have done,” Romo told Estrada.

Nor should getting Cordova Park ready for CPAA’s use at the start of the year be a problem, Romo said on Thursday, Oct. 21. Already, city staff has been directed to look into the issue to help find an agreeable resolution.

Another proposal that Romo said she is advocating for is the enlistment of a Coachella Valley-based nonprofit that has assisted her with rehabilitating a city park in the past.

Through the city’s adopt-a-park program Romo has adopted Border Friendship Park (also known as Genaro “Teco” Monroy Park), located at First Street and Paulin Avenue. The nonprofit had assisted her with its beautification and could potentially assist with the venues the CPAA is concerned about.

“We are doing the impossible with the little money that we have to fix Calexico parks,” Romo said.