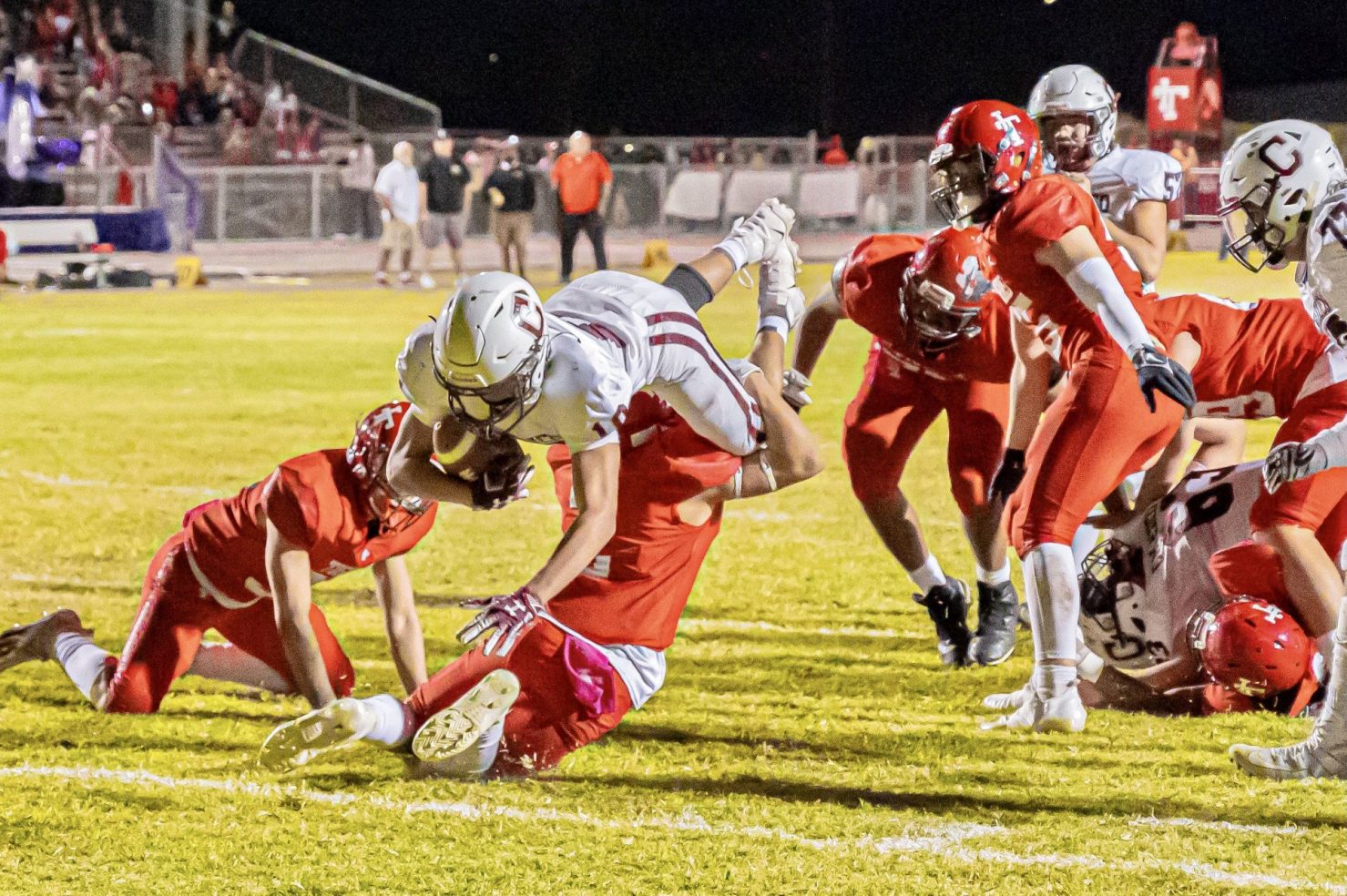 Calexico High junior running back Troy Marin goes over an Imperial High defender to get into the end zone during the Bulldogs’ 14-6 loss to the Tigers in an Imperial Valley League game at Shimamoto-Simpson Stadium in Imperial on Friday, Oct. 22. | CAMILO GARCIA JR. PHOTO
Home
Sports
In Sports

Tigers’ Defense Comes Up Big Against Calexico in 14-6 Win

A first-half fumble recovery returned for a touchdown by Imperial’s Pablo Moreno and a pair of fourth-quarter interceptions by Seth Shaw and Victor Valenzuela sealed the game for the Tigers on their Homecoming night.

The Tigers (5-4 overall, 1-2 IVL) struggled throughout the game, possibly a bit flat after an emotional victory over longtime rival Holtville and hard-fought losses to Brawley and Central in the last three weeks.

Calexico (4-5 overall, 1-3 IVL) was aiming to end a 14-game losing streak at Imperial and held the Tigers’ offense scoreless in the first half.

“I told the kids I was very proud of the way they played tonight,” said Fernando Solano, Calexico’s second-year head coach. “All I ask of them is to leave everything out on the field and they did that tonight. The energy level was there all night but we just made some mistakes that cost us in the end.”

Imperial got on the scoreboard with 3:24 remaining in the first half when Moreno scooped up a fumble and sprinted 60 yards for the touchdown. Ethan Gonzalez Lopez added the extra point and the Tigers led 7-0.

The Tigers tried to add to the lead just before the half when a C.J. Tiernan 44-yard halfback pass to Jesse Nichols gave them a first-and-goal at the 2-yard-line with seconds remaining in the half.

The Bulldogs turned them away, however, when Pedro Cruz came up with an interception in the end zone on a Rhys Vindiola pass that kept the score 7-0 at the half.

After going three-and-out to open the third quarter, Imperial would get a key fumble recovery by Devin Meza that gave the Tigers the ball at the Calexico 21-yard-line. One play later, Vindiola found Dominic Suarez for a 36-yard touchdown, his first scoring reception of the season. A Gonzalez Lopez conversion gave Imperial a 14-0 lead with 8:50 to go in the third quarter.

“The kids went in believing they could win and with the exception of a couple plays, we were right there with them,” Solano said. “A couple times we just shot ourselves in the foot.”

After falling behind 14-0, Calexico would embark on a monumental 14-play drive that spanned 66 yards and used up 8:34 off the clock. A 20-yard pass on third-and-15 from junior quarterback David Esquer to junior Andres Ramirez and a 27-yard pass from Esquer to Andrew Rivera on fourth-and-eight keyed the drive.

Troy Marin would blast over from five yards out with 11:30 remaining in the game to put the Bulldogs on the scoreboard. The two-point conversion pass was no good, leaving the score 14-6 with most of the fourth quarter to play.

Imperial battled back, moving the ball to the Bulldog 31-yard-line but was stopped when Rivera would pick up a fumble and returned it to the Tigers’ 37-yard-line.

However, three plays later, Shaw would come up with his fifth interception of the season, giving the Tigers the ball at their own 9-yard-line.

Imperial would go three-and-out and Calexico had the ball at the Tiger 43-yard-line with 4:33 remaining in the game.

On the next play, Valenzuela would snare his first interception of the season giving the ball back to the Tigers on their own 29-yard-line.

From there, Imperial was able to run out the clock.

Esquer completed his first 12 passes for the Bulldogs for 110 yards. Andres Ramirez led the Calexico receivers with seven catches for 75 yards. The stingy Tiger defense was tough against the run, limiting the Bulldogs to a net of three yards rushing.

The Tigers will finish IVL play by hosting Southwest in the annual Johnny Romero Helmet game at 7 p.m. on Friday, Oct. 29.

The Bulldogs conclude their regular season with Senior Night and Homecoming at Ward Field in Calexico when they host crosstown rival Vincent Memorial Catholic in the Battle for the Border, set for 7 p.m. on Friday, Oct. 29.