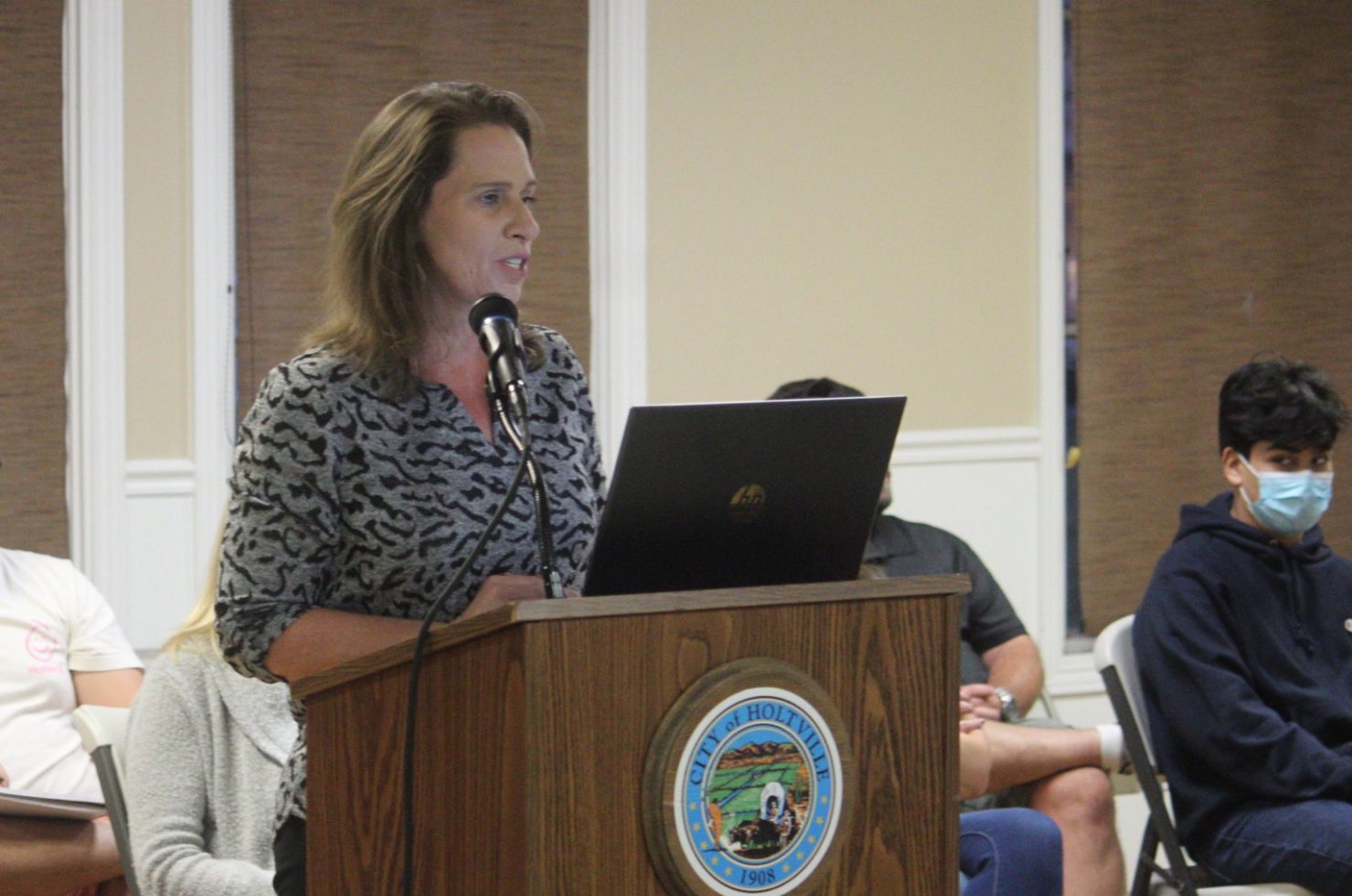 Jennifer Braun, who is working on grant funding with the Boys and Girls Club, made a presentation to the Holtville City Council on Monday, Oct. 25, proposing that a Boys and Girls Club and community center be built in the city. | MEGAN JONES PHOTO
Home
Local News
In Local News

HOLTVILLE — After years of not having a place to call its own, the Boys and Girls Club is asking Holtville officials to approve applications for a grant that will allow the program to build its own clubhouse in the city.

Jennifer Braun, a grant writer working with the Boys and Girls Club, gave the presentation proposing for a dedicated clubhouse/community center during the regular meeting of the Holtville City Council on Monday night, Oct. 25.

Holtville’s Boys and Girls Club is inside St. Paul’s Lutheran Church with 34 children attending and is only open for three hours. The Holtville club is able to offer a “Power Hour,” which provides one-on-one mentoring homework help and a healthy habits program along with being a safe place children can go to after school, club officials said.

Braun is proposing the city build something in downtown Holtville.

“The Boys and Girls Club of Imperial Valley, the city of Holtville, and the entire community benefits, and the youth have a safe place to learn and play,” she said.

A dedicated building serving as a clubhouse will allow the club to expand its programs and give kids a chance at other opportunities. For example, clubs in the Coachella Valley, with which Braun also works, have separate computer labs for robotics and coding, pizza kitchens, and even boxing programs.

A new building would be about 30 percent dedicated to the Boys and Girls Club and the rest could be for community uses, where leagues and residents could take advantage of basketball courts, multipurpose rooms, craft closets, and other activities that have been requested by the Holtville community before but have not had a space to use. Braun added there could be a chance of rental fees to cover the expenses of the building.

Braun cited a 2016 study by the Institute for Certain Social Research at the University of Michigan that found communities that put priority dollars into Boys and Girls Clubs can get about $10 in return.

Holtville has a high child population at 1,788, or 31.9 percent of residents, she said, which is larger than most California cities of similar demographics. However, Holtville’s education attainment rate is at 24.9 percent in comparison to 88.61 percent, according to a 2019 American Communities Survey.

To that end, Braun said, “Regularly attending club members are 38 percent more likely to be on track to graduate from high school on time.”

“That can have a major impact in your community having a community center that also serves as a teen center and a Boys and Girls Club where your students are getting mentor help and much more,” Braun told the Holtville City Council.

She proposed the city apply for three different grants: the Regional Parks Program, the State Parks Program or SPP, and the National Endowment of the Humanities grant.

The Regional Parks Program creates and expands regional parks or regional park facilities funded by Proposition 68. Eligible projects include recreation facilities, which a new clubhouse would fall under. The City could get a grant for possibly 2 million if it applies to this program according to Brawn, allowing at least part of the construction of the facility to be funded.

The SPP grant can range from $4 million to $6 million and can be used to build support facilities for recreation. For example, Coachella used this project to fund pathways, exercise equipment, and other improvements to Rancho Las Flores Park.

The Nation Endowment of the Humanities helps with the improvement of facilities, including fixtures, programs, and other components of a community center. Though compared to the others, this grant awards $750,000 and would be used for end-of-project type of fees.

Braun says these grants can be used to partly fund a large part of the building’s construction, but the rest will have to be raised through the county and local donors. Still, these types of funds will get the project off the ground.

Rafael Espinosa, a senior of Holtville High School, asked that the city consider the grant and what a Boys and Girls Club and community center could mean for the youths of Holtville.

“A building would be good for us,” Espinosa said. “If we do that, it would bring us a lot of opportunity to learn new things in life, maybe some things we would learn in other places, we could learn here in Holtville.”

Another Holtville student, Matthew Reyes also spoke in favor of the a new Boys and Girls Club building. He focused on the pizza kitchen example Braun gave during her presentation, an idea he liked, saying if there is a place for kids to learn how to cook and maybe sell the food, it will open many doors for them in terms of career and business.

“I like that it’ll make kids think about money and business,” Reyes said. “It’ll also teach them to cook for themselves and their families and maybe start their own businesses.”

Victor Valencia said his little brother is part of the Boys and Girls Club and has watched the club kept him active, safe, and allowed him to open up socially.

“The Boys and Girls Club has helped him be more outspoken and explaining his ideas, so I imagine this new idea is going to create a new way for other people like my little brother to express themselves and create better places,” Valencia said.

The City Council said it will take into account the proposals and appreciates what the Boys and Girls Club does for the city’s youths.

“We very much love our youth and hope to continue to serve them for many years to come,” Braun said.

(This story was updated at 8:45 a.m. Wednesday, Oct. 27, to correctly identify the community members who commented on the presentation.)