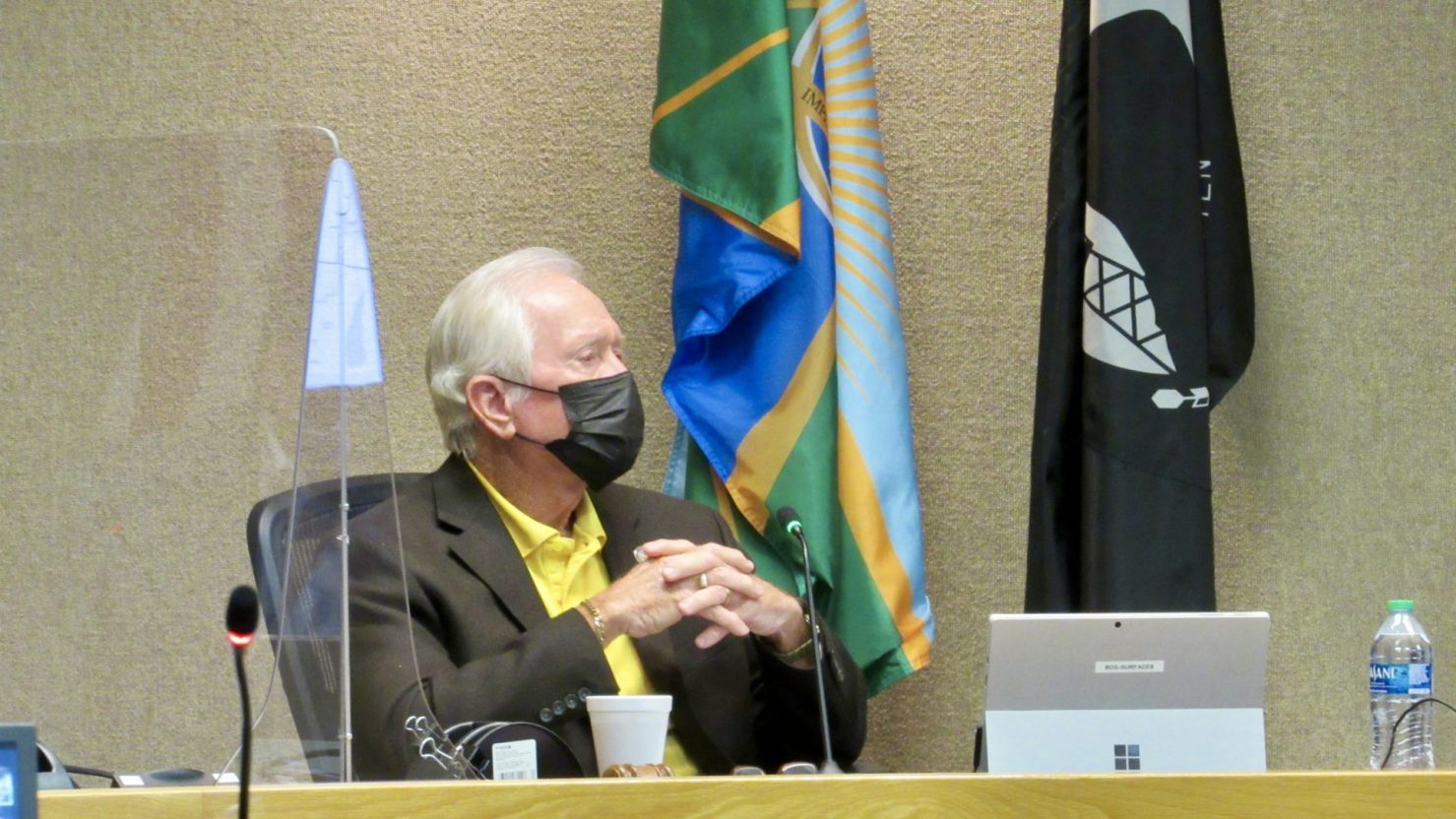 Imperial County Board of Supervisors Chair and District 3 Supervisor Michael Kelley listens during a special meeting on redistricting on Thursday, Oct. 21, when the board chose a final draft map for the county’s supervisorial boundaries. Kelley and Vice Chair and District 1 Supervisor Jesus Escobar were the only board members in chambers; the balance attended through Zoom. | MARCIE LANDEROS PHOTO
Home
Regional News
In Regional News

EL CENTRO — Imperial County released the final draft of its redistricting map on Monday, Oct. 25, after rejecting the four drafts recommended by a local redistricting advisory commission and writing its own boundaries during a meeting late last week.

The move has at least one community leader irked over the choice by the Imperial County Board of Supervisors to redraw district lines on its own rather than go with the advisory commission’s recommendations, which included four draft maps built through several sparsely attended public meetings.

Ultimately, the county board had final say over the process, and on Thursday morning, Oct. 21, went with a map drafted in real time at the meeting that deviated little from its current supervisorial district boundaries. The map, titled “3A,” is a reworking of one of the four maps recommended by the commission, although not the commission’s preferred version.

“I like the previous plans that was mentioned, where these districts pretty much stay the same, with some minor changes. But for me, it’s all about keeping the status quo,” District 5 Imperial County Supervisor Ray Castillo said.

Already representing sections of El Centro, Calexico, Brawley, Imperial, and all of Holtville, Winterhaven, and Palo Verde, Castillo said he did not feel he could give another community fair representation, because of the number of areas he was already serving.

District 2 Supervisor Luis Plancarte also preferred moving forward with map 3 and adjusting it from there during the Oct. 21 meeting.

“I really like that, although it is not one of the ones that were celebrated for recommendation (by the commission), I feel that probably the basis of map 3 shows the best starting point of what we have right now,” he said. “I’m ready to endorse it with a few minor tweaks as represented by some of the other districts.”

That the county board chose to go with version 3 did not surprise advisory commission member Eric Reyes of Brawley. The board had recommended map 4.

“I felt (the) supervisors would go with the consultant-created map, as it minimally deviated from the current district maps and created an opportunity for the status quo to continue,” he said in a statement sent to this newspaper.

“We were not at all deluded to the fact the supervisors would have the final say, and I was not at all surprised, and even anticipated the Board of Supervisors’ vote to overturn our recommendation and stay with the least different map as currently in place,” Reyes stated in part. “It is not a slight on our commission nor the Board of Supervisors, who exerted their duties within their realm of power.”

Although the commission voted 4-1 to recommended map 4, commission member Lorena Minor-Montes of Calexico spoke during public comments on Oct. 21 to tell the board thank you for selecting a version of map 3 despite the commission’s choice.

“As a commission we initially wanted map 3, but at the 11th hour it was changed. I was the lone one standing with 3; everybody else deciding to go with 4, and my reasoning was this: the task at hand was given to us to make minimal change to the existing map and communities, and to keep the communities of interest together,” Minor-Montes said, who went on to explain that map 4 was chosen to break up the ports of entry, not to focus on the communities.

The new draft map will keep Calexico mostly within one district but will continue to divide El Centro into three districts, the first housing most of El Centro and the desert areas south of Interstate 8, the second will be north of Interstate 8 and will include the city of Imperial, and last will also include Holtville and all of eastern Imperial County as well. The fifth district will include Brawley and the Salton Sea area, effectively only changing the borders between the Calexico and Holtville.

Comite Civico del Valle Executive Director Luis Olmedo was critical of the decision to reject the recommended maps from the public and commission, asserting that the choices should be made based off where communities of common interests are located, rather than sticking with the traditional districts.

Also, he has concerns over not adhering to the public process.

“It doesn’t seem that there is an intent to respect the public process. The county justifies that they’ve had plenty of meetings, but just scheduling meetings and not investing in meaningful community engagement doesn’t necessarily equal to engagement,” Olmedo said during an interview on Friday, Oct. 22.

In his organization’s role to help disadvantaged communities through civic engagement and education, Olmedo said he would be contacting Communities for a New California, another grassroots nonprofit that has assisted in other counties on redistricting issues.

Every 10 years, with the release of the federal Census, counties are required to update their district maps. Imperial County started its work in mid-September.

The process was put on a shortened timeline due to the pandemic. Normally, Census information is release in April, but this year the official numbers did not come out until Sept. 16, leaving leaving Imperial County just three months to collect public input and approve a map by the Dec. 27 deadline to submit to the California Secretary of the State.

Drawing a map was no easy task for the commission, which had to meet strict requirements to keep the districts legal. Each district must have a population with less than a 10 percent between another district in the same county. Districts cannot be broken into parts, they cannot be bordered on all sides by a single other district, they must be as close to a simple shape and keep communities of interest as united as possible.

“We recognize that although we represent different districts, we are not naive enough to think that’s all we are responsible for,” county board Chairman and District 3 Supervisor Michael Kelley said on Oct. 21 in response to commission member Minor-Montes’ comments. “We are responsible for the whole county.”