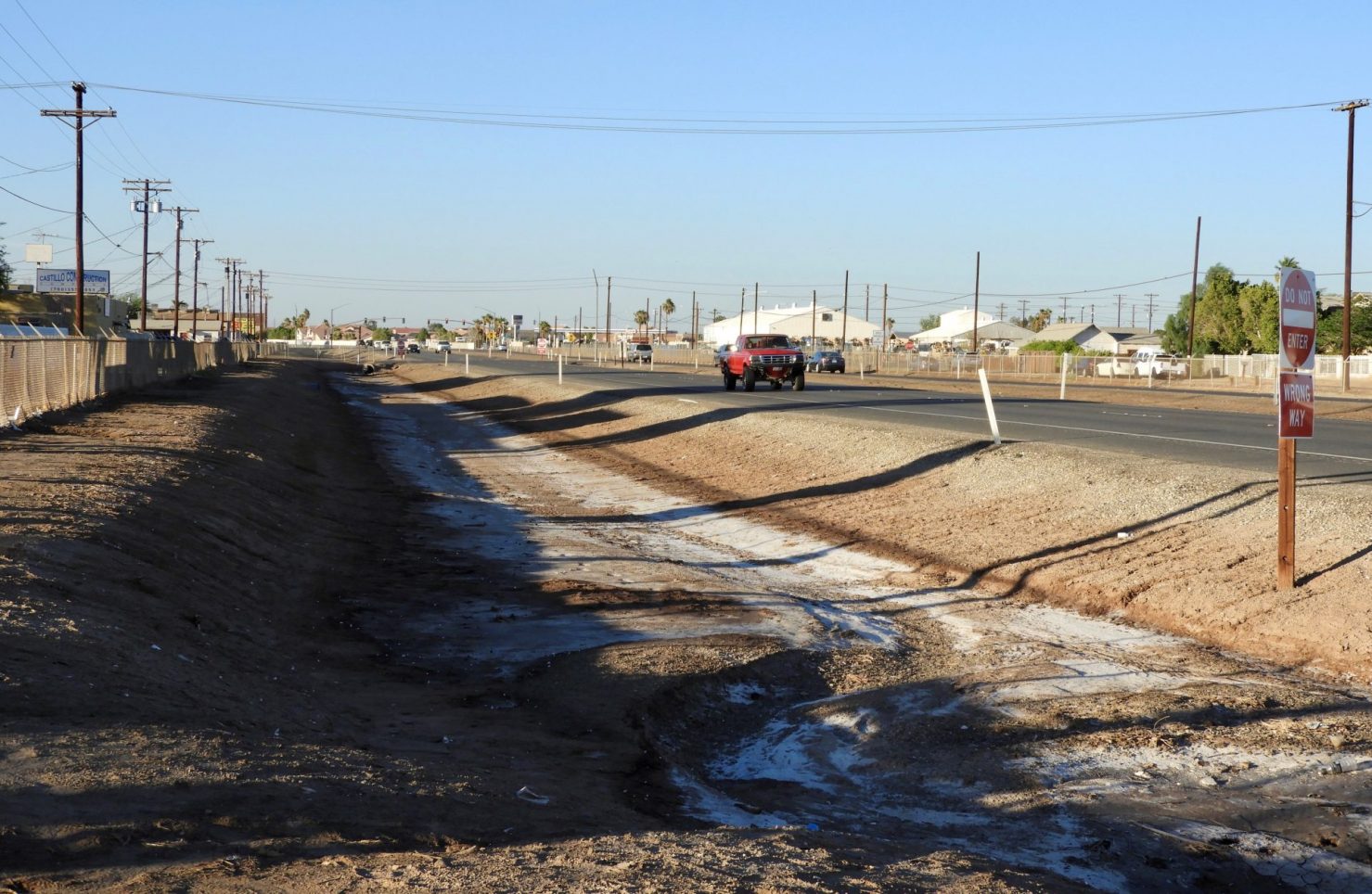 Imperial officials say the appearance of Highway 86 doesn’t reflect the vitality and development happening in the city. Brown dirt ditches caked with alkaline currently line the corridor, but the city has started the process to elicit the wants of residents. | MARCIE LANDEROS PHOTO
Home
Regional News
In Regional News

IMPERIAL — As motorists zip through the city of Imperial along Highway 86, it’s quite the “brown town” with its alkaline-caked ditches, yet city officials hope to change that image with an effort to beautify the corridor and make it a “destination highway.”

“… The 86 (corridor) doesn’t reflect our population,” Imperial Mayor Karin Eugenio explained as she pointed out the changes that have occurred in the city over the years.

During a special meeting joint meeting of the Imperial City Council and Planning Commission on Oct. 20, the mission to make State Route 86 a “destination highway” started in earnest as community outreach was ordered to define what residents would like to see.

“The City Council and Planning Commission has set the goals, and so what we take from that is we now conduct our outreach. So next phases, we will be identifying what calming measures that we can use along Highway 86 to accomplish the safety, also creating the destination, controlled intersections and all of that,” Imperial Assistant City Manager Alexis Brown said in an interview during Imperial Market Days’ first event of the season, Fiesta De Los Muertos, on Saturday, Oct. 23.

For years, the city struggled with the inability to get the state Department of Transportation, which had jurisdiction over State Route 86, to beautify the highway. But that issue was resolved in 2015 when Caltrans relinquished control over the corridor to Imperial.

“Being on the council for many years, I’ve always wanted to see the 86 corridor taken care of to beautify our city and making something viable and beautiful. The only problem we had was for years, Caltrans had control of the highway,” Mayor Pro Tem Geoff Dale said during Fiesta De Los Muertos. “We could never do that. Now that we have it ourselves, we can do that.”

Highway 86 as it runs through Imperial is lined with deep dirt ditches on either side of the highway and running through the center as a median, leaving passing motorists with a view of, well, a lot of brown and not much else.

“It’s not a beautiful stretch of road to look at. And we are growing so rapidly here in the city of Imperial that within the city proper, it’s great. We have great housing developments. We have up and coming businesses,” Mayor Eugenio said.

The city has started to gather information using CR Associates, a traffic engineering company out of San Diego, that will be asking the community what their wants and needs are for this project, then taking the information they gathered to create a plan to meet the needs of the city.

“Following the completion of (creating a plan), we’ll identify the land and zoning aspects that go along with 86 and the existing infrastructure that is running parallel,” said Ana Garate, a transportation planner with CR Associates, who was at a booth at Fiesta Del Los Muertos gathering information from the public. “And once we do that, we’ll have several overlays to determine how the construction and zoning will proceed also go into architectural standards.”

Garate worked alongside city staff on Saturday taking surveys of what community members would like to see Highway 86 become, asking questions like: how often do they drive the 86? Do they feel comfortable walking or biking? What kind of services would you as residents like to see?

CR Associates will continue to gather information at community events like Imperial Market Days, but the outreach is not limited to in-person surveys. CR Associates have also made the surveys available online, granting any Imperial resident with an internet connection the ability to share their thoughts on the direction the city should go with the corridor.

“There’s a project website for the project, and it’s cityofimperial.org/SR86. That’s the website. You can go, there is a lot of information. There is a survey linked to that website, and there is information about future opportunities to get involved public or as the business owner,” Garate said.

Public participation is vital to the success of developing the stretch of Highway 86 into a beautiful location, as it will inform the city which direction they should move, city officials said.

Residents are being strongly encouraged to voice their thoughts and concerns, either by attending meetings, visiting City Hall, filling out the surveys online or in person, or emailing city officials. Mayor Pro Tem Dale even went so far as to offer his cellphone number so any resident can reach out to him directly to express their views.

“We always want our residents to come and participate in our council meetings or just absolutely come to us and talk to us at City Hall. My phone number has always been available,” Dale said. “I’ve always provided myself and my cell phone (number) to anyone in this community, and that’s 760-791-4314.”

Previous
GILGAR: Happy Halloween in the Age of No-Bail