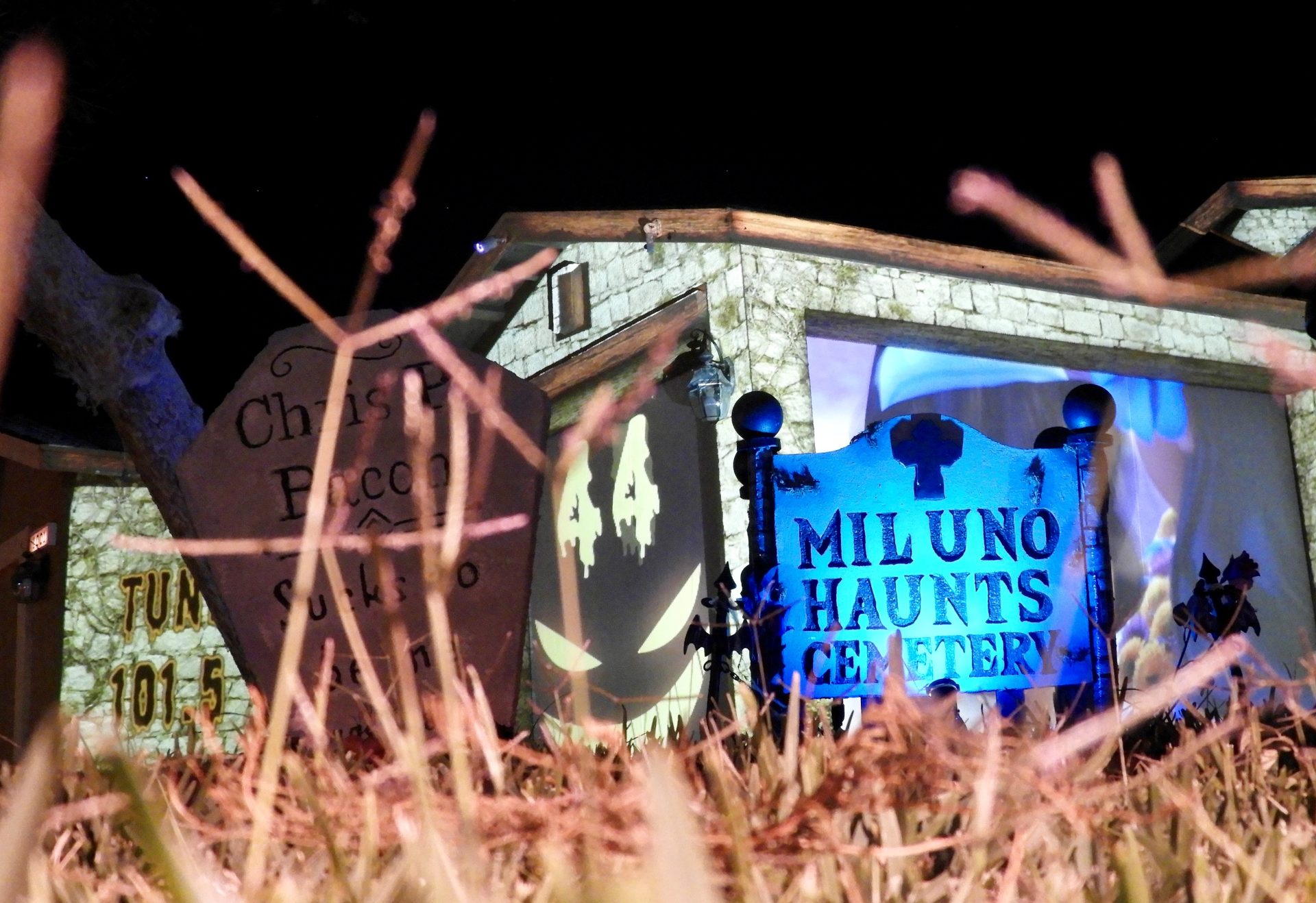 A tombstone for the “Mil Uno Haunts Cemetery” marks the site of the Lopez siblings’ annual Halloween-themed yard display and interactive show with lights, music, projections, and props at 1001 Desert View St. in Calexico. Visitors can also donate to a worthy cause while on site. | MARCIE LANDEROS PHOTO
In Featured StoriesRegional News

CALEXICO — Danny Elfman as Jack Skellington can be heard serenading the area around Desert View Street nightly, as lights, projections, and spooky props synch to a soundtrack of “This is Halloween” and other haunting favorites.

Siblings David, Eddie, and Adriana Lopez’s annual holiday-themed light shows in the Rainbow Park subdivision on the western edge of Calexico are well-known in the community, as is their penchant for using the elaborate displays to raise money for worthy causes.

This year, the Lopez siblings are amassing funds and supplies for the Centro de Atención Múltiple (Multiple Service Center) Josefina Ibarra de Cortez (MSC), a special education center and school located in San Felipe, Mexico, and their Mil Uno Haunts display of is the ghastly go-to to do some good.

“They’re a special ed school. They have many, many needs right now. Because of COVID, the school has kind of been run down,” David Lopez said during a recent interview. “There wasn’t any personnel at school, so now that they’re starting to try and open back up, there’s a lot of things that they need.”

MCS is one of the limited number of schools dedicated to differently abled students in Baja California and functions as the only Multiple Service Center in the port city of San Felipe.

“It is a special education school within the public sector which serves 53 students with diverse special needs who range from toddlers, preschoolers, primary grades and preparation to enter the workforce through workshops,” said Tatiana Zarai Rivera Barajas, director of the MSC, in a letter thanking the community of the Imperial Valley for its support.

In the letter, Zarai specified the school is looking for any color exterior paint to create murals and paint the playground equipment, materials and utensils for its kitchen workshop, tools for the woodshop, desks for students, corkboards, gardening tools and packets of seeds for desert planting.

Mil Uno Haunts — which in December will become Mil Uno Lights for Christmas — has set up a way for people to contribute when they visit 1001 Desert View St. to witness the Lopezes’ handiwork. But people can also contribute online through the Mil Uno Haunts website.

The artistry for the show is quite impressive, as the projections wrap around the house creating interconnected images and videos to entertain a community starving for some amount of activity and entertainment.

“We do the show for the community to have something to do. There’s not a lot of stuff to do here in the Imperial Valley, so it’s a family friendly show so they can come and have fun,” David said. “You can park outside if you want, and you tune your radio to 101.5 (FM). You’ll hear music that sings to what you’re watching.”

Each sibling plays a unique role in the creation of the show. The youngest is Eddie, at 31 years old. He is the show’s “artist,” painting and creating backdrops and putting together images. At 32, Adriana is the middle child who takes care of all the social media and advertising. David, the oldest at age 39, manages the props, set-up, and maintenance of the show.

Mil Uno Haunts is located at the sibling’s family home, which they share with their mother and grandmother at 1001 Desert View Road.

If it’s not too windy, the show can be seen nightly from 7 p.m. to 10 p.m., with a receiver broadcasting music to any radio in the immediate vicinity via 101.5 FM, so the show can be enjoyed from inside a vehicle. The show’s audio is only played over speakers outside the home on Friday and Saturday nights, out of respect for the community that these siblings love so dearly.

And maybe so they won’t arouse the dead. Then again, “This is Halloween,” and that’s the point.

Next
Battle for the Border Gets its ‘Bell’