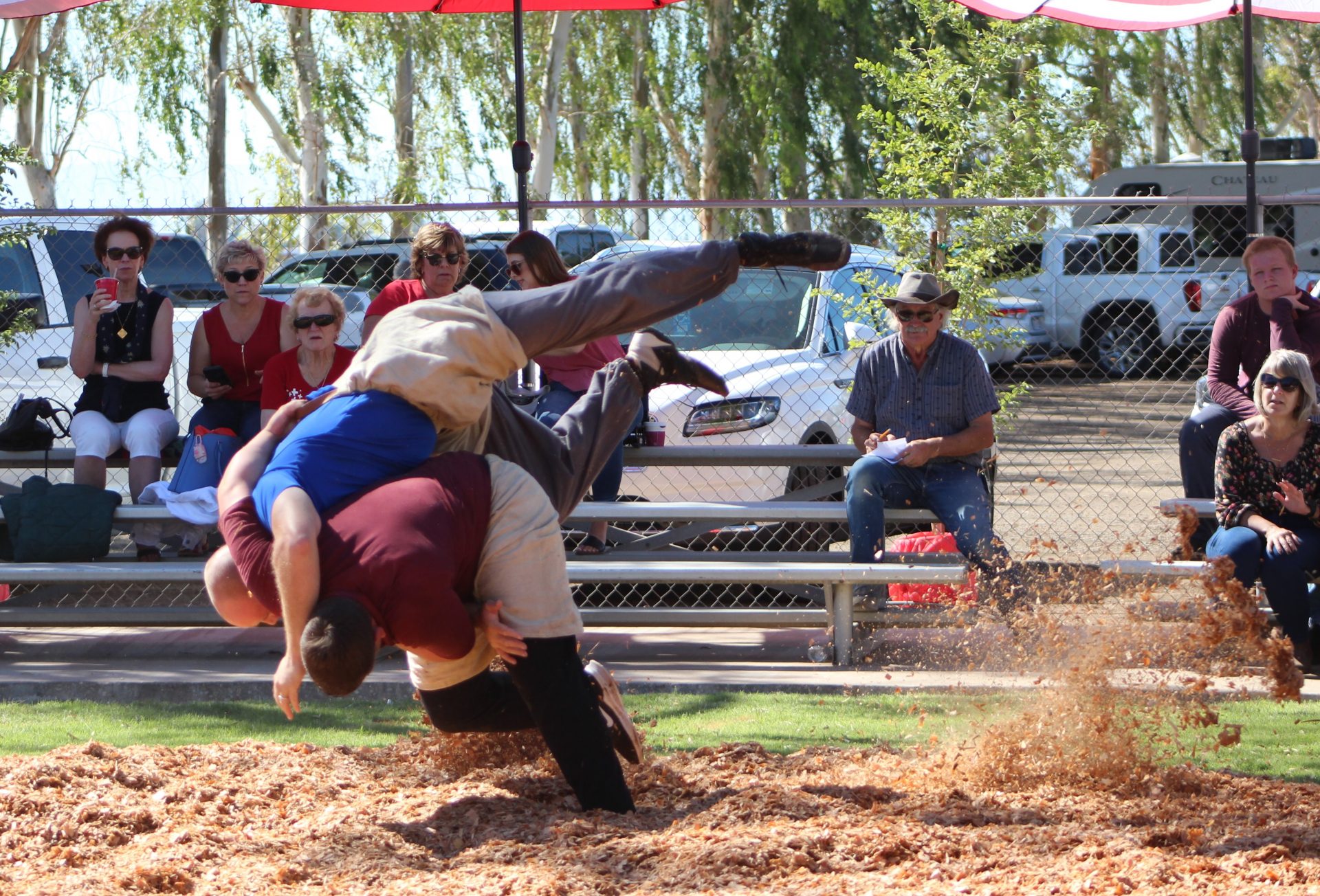 HOLTVILLE — The Imperial Valley Swiss Club held the West Coast Schwingen Championship on the weekend, celebrating the club’s 100th annual Schwingfest, bringing participants from across the West Coast and Switzerland to Holtville.

“It’s our yearly Schwingfest, but this was a big one because it was a championship and it was the 100th anniversary of wrestling (in the Imperial Valley),” said event organizer John Britschgi, vice president of the Swiss Club. “They just came out, guys come from all over California, Oregon, Washington, some even come from Switzerland.”

The Imperial Valley Swiss Club’s annual Schwingfest is a three-day long event that consists of a golf tournament, a rock-throwing contest called “steinstossen,” dinners and dancing with live music, children’s games, a parade through the Swiss Club grounds, and most important, the Schwingen competition. It all took place Friday, Oct. 22, through Sunday, Oct. 24.

Schwingen, also known as Swiss wrestling or “hosenlupf,” is a style of folk wrestling originating in pre-Alpine parts of German-speaking Switzerland. Wrestlers wear “schwingerhosen,” or wrestling breeches, with belts that are used for taking holds. Wrestlers use throws, trips, and grappling to try to be the first person to pin his or her opponent’s shoulders to the ground, thereby winning the bout.

Eight Swiss clubs along the coast of California participated in the championship, with the champions earning a chance to travel to Switzerland to wrestle. This year’s champion, Andrew Betschart hailed from the Ripon Swiss Club in Modesto. Alongside the wrestlers, the interim Switzerland Consul General Nicholas Descoeudres traveled from his new post in Los Angeles to join in the celebration.

“We were lucky to have him because it was a transition from an old one to a new one. So, when we sent the letter to him and contacted him, the old one says, ‘I’m going to be gone, I’m leaving.’ So, he couldn’t say ‘yes,’ the new one would make it. So, when the new one saw the letter, he says, ‘I’m definitely going to be there,’” Britschgi said.

George Morris, Imperial Valley Swiss Club past president and Schwingfest planning committee member, shared how close Holtville’s club came to not being able to host the celebration at all.

“Normally, we have this Schwingfest at the end of March or the first of April, but because of COVID, we couldn’t. We didn’t want to cancel it because it was 100 years since we had the first one, and that was only about three miles from here, where the first one was,” Morris sad. “And so we changed it. We usually have our boys participant in a Schwingfest right now, which is small, just little boys. We moved it to that because of trying to make the 100-year something that’s interesting.”

Like of the rest of the Imperial Valley, COVID left an impact on the club and its members. Events like last year’s Schwingfest were forced to be cancelled, much to the dismay of an otherwise very social community. But this year’s event gave community members a chance to reconnect with each other.

“It was nice to see everyone again. It’s been a year and a half since we could really get together, and this is a great family bonding and community bonding event,” I.V. Swiss Club president Jeff Williams said.

Britschgi, Williams and Morris all expressed pride in this year’s Schwingfest and the community that engages so readily in these cultural traditions. All three expressed gratitude to all who participated, whether as a wrestler, a spectator, or among those who planned the event.

“I want to thank the board for all the hard work, all the volunteers committee and everyone that dedicated their time to put it on, because otherwise it can’t happen,” Williams said. “A lot of people did a lot of work to have a successful event.”

Next
Imperial’s ‘Trunk or Treat’ Kicks Off Family Fun