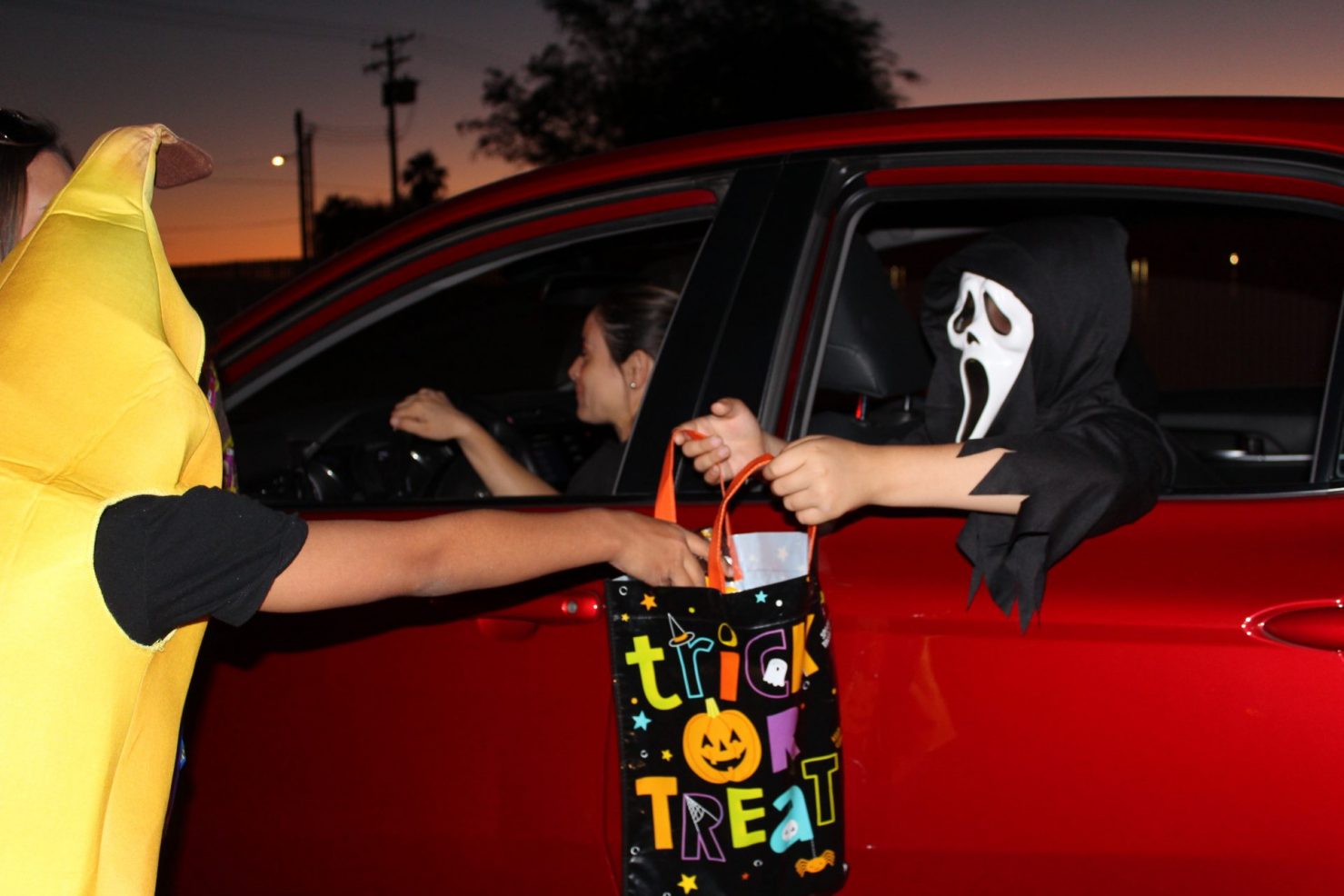 WHERE TO GO? Numerous Halloween-Themed Events Are Happening Throughout the Imperial Valley

IMPERIAL — What do you do when you’re in a pandemic, carnivals are not recommended, the idea of trick-or-treating still makes parents a bit nervous, but the kids still crave that sweet, sweet Halloween candy?

Throw a “Trunk or Treat!”

Ben Hulse Elementary School in Imperial did just that on Tuesday night, Oct. 26, hosting a “trunk or treat” for its current, past, and future students with all the Halloween flair that could be mustered.

The school’s Parent Teacher Organization was inspired to combine trick-or-treating with a car parade for the aptly name “trunk or treat” since the school could not host its annual carnival. PTO president Cindy Navarro said the parents and the school staff wanted to do something that would get the kids in the Halloween spirit but at the same time be safe.

Hence the modified trick-or-treat event, where teachers were able to decorate their vehicle trunks how they wanted and hand out candy. Families drove by the trunks and the teachers would hand candy to the waiting students in the back seats, cutting down on physical contact and keeping everyone safe.

“We just wanted to have a really fun night for the students,” Navarro said. “It’s been a tough year coming back and this is just something for them to look forward to.”

PTO vice president Lilia Gastelum said this was the safer option than having a carnival where everything is being touched, though Gastelum is definitely looking forward to a “normal” Halloween night on Sunday, Oct. 31.

“I’m actually excited that we are going a little bit back to normal, but we can still be a little safe,” Gastelum said. “We figured this trunk or treat would be the best.”

Cars were lined up all the way past the Imperial pool, stretching way past D Street and down Worthington Road.

Teachers and staff were set up to hand out candy, courtesy of the Brawley Walmart, in the staff parking lot with big bags, buckets, and storage containers ready to go. Once sundown came the cars started pouring into the parking lot honking and blaring Halloween music. Families were encouraged to decorate their vehicles for the event and decorate they did. Some cars came in with just balloons and paint while other were covered in spider webs, streamers, skeletons, even some giant blow-ups.

Inside children in costumes were holding out their buckets or bags with smiles waiting for teachers to drop their treats into their loot bags.

Eric Beltrones and his daughter, Andrea Beltrones, went through the line waving and saying hello to teachers in the parking lot. Andrea was happy to get the candy while her father was glad to see an event for the children.

“It’s nice, I like that they gave a lot more candy than they did last year for Easter,” 9-year-old Andrea said.

“It’s great, though the line is really long!” her father said. “This is cool for the kids.”

“I like getting the candy,” said Jiana Lopez from her family’s car. “I’m so excited for Halloween.”

“I’m kind of happy because I get to see people and get dressed,” 11-year-old Javier Medina said.

Fourth-grade teacher Christina Labunog was happy to be there for her students and that the school was able to do something for the kids. The trunk or treat was an event that help heal the disappointment of not being able to have the annual carnival this year and last year.

“It’s really exciting to be able to still do something for the kids,” Labunog said. “These poor kids need something to do, they’ve been out of the loop for so long.”

Her son, Manix Labunog, was helping her hand out candy at his former school. He was looking forward to Halloween was glad to see his old school doing something for the students.

“It’s nice to see everyone’s costumes that’s for sure. Like last year’s Halloween you would just go to the store, buy candy, and you wouldn’t be able to go house to house like you usually do,” said Manix.

Special education teacher Jacqueline Sanchez and her teacher aides were all excited to put together the trunk or treat, going all out and dressing as Mario characters.

“The kids are excited, we’re excited, and I’m sure the line’s all the way to the pool!” said Sanchez. “The kids really do look forward to it. It’s something they get to get excited for, they get to see their teachers, instructional aides, principal, vice principal all dressed up.”

Traci Gibbs, principal of Ben Hulse, said they were the only school in Imperial that put on something.

“It’s very positive for the kids, and as you can see it is very well received by the public,” Gibbs said. “So I think it’s a positive thing.”

The night of fright and thrills is around the corner. After a year of lockdown many families are antsy to get out and do something rather than sit at home.

Ben Hulse is not the only location getting their spooky on. The rest of the week, the Imperial Valley is gearing up for the Halloween fun this Sunday and getting the trick-or-treating done safely.

Several more trunk or treats will be taking place this week around the Valley including at Brawley’s Gateway Church and Christ Community Church, Imperial’s Southern Baptist, and in El Centro at Firestorm Gymnastics, all of which are happening in the event. Contact each for times other pertinent information.

Also happening in El Centro is the Great Pumpkin Hunt put on by Sierra Jaime State Farm Agent, a challenge to find 30 pumpkins hidden through the city between Oct 25-29. Hints on where to find them will be released via the event Facebook page. Prizes will be given out when a pumpkin is found and turned in at the State Farm agency by the Imperial Valley Mall until 5 p.m. Friday, Oct. 29. The hunt is limited to one pumpkin per family.

Calexico will be hosting Feria de la Raza on Thursday, Oct. 28 from 5 to 10 p.m. in downtown Calexico. Organizers hope to bring something new to the city — not quite a farmers’ market but not an all-out fair — that will boost the economy of Calexico. There will be food trucks, vendors, local artisans, and more for the whole family.

Even the Humane Society of Imperial County is getting in on the Halloween fun, hosting a Halloween Dance Party to benefit the facilities. It will be held at Fitness Oasis in El Centro on Oct. 28 from 5:30-7:30 p.m. with Zumba, Tahitian dancing, and a pet costume contest.

The University of California Desert Research and Extension Center will be hosting a “Down on the Farm” event for Down Syndrome Awareness on Oct. 29 from 3:30-5:30 p.m. Activities will include hay wagon rides, a corn maze, fall craft and planting activities, costume contests, and more.

The El Centro Aquatic Center will be hosting its second annual Floating Pumpkin Patch on Saturday, Oct. 30 from noon-3 p.m., a unique take on a classic fall event. Pumpkins will be floating in the pool for everyone to dive in and pick out while having some aquatic fun before the water gets too cold. Decorating stations will be set up and an inflatable swimming track will host races.

The Southwest High School Orchestra will also be hosting a Fright Night concert on Oct. 30 starting at 7 p.m. The event is promising to be filled with frights and chills with Halloween music, costume contests, and even an “instrument petting zoo” where families can interact with musicians and learn about instruments.

Best STEP Forward will host its annual “Spook-tacular” event in Calipatria on Oct. 30, a trick-or-treating event turned drive-thru from noon to 1 p.m. The city of Calipatria will also be hosting a movie night on Oct. 30 at Rademacher Park at 6 p.m.

As for the families in Imperial, this night was just one big event with more to come later this week. Ben Hulse has a week of Halloween fun lined up for its students including a kindergarten trick-or-treat walk-through and pumpkin-carving contests.