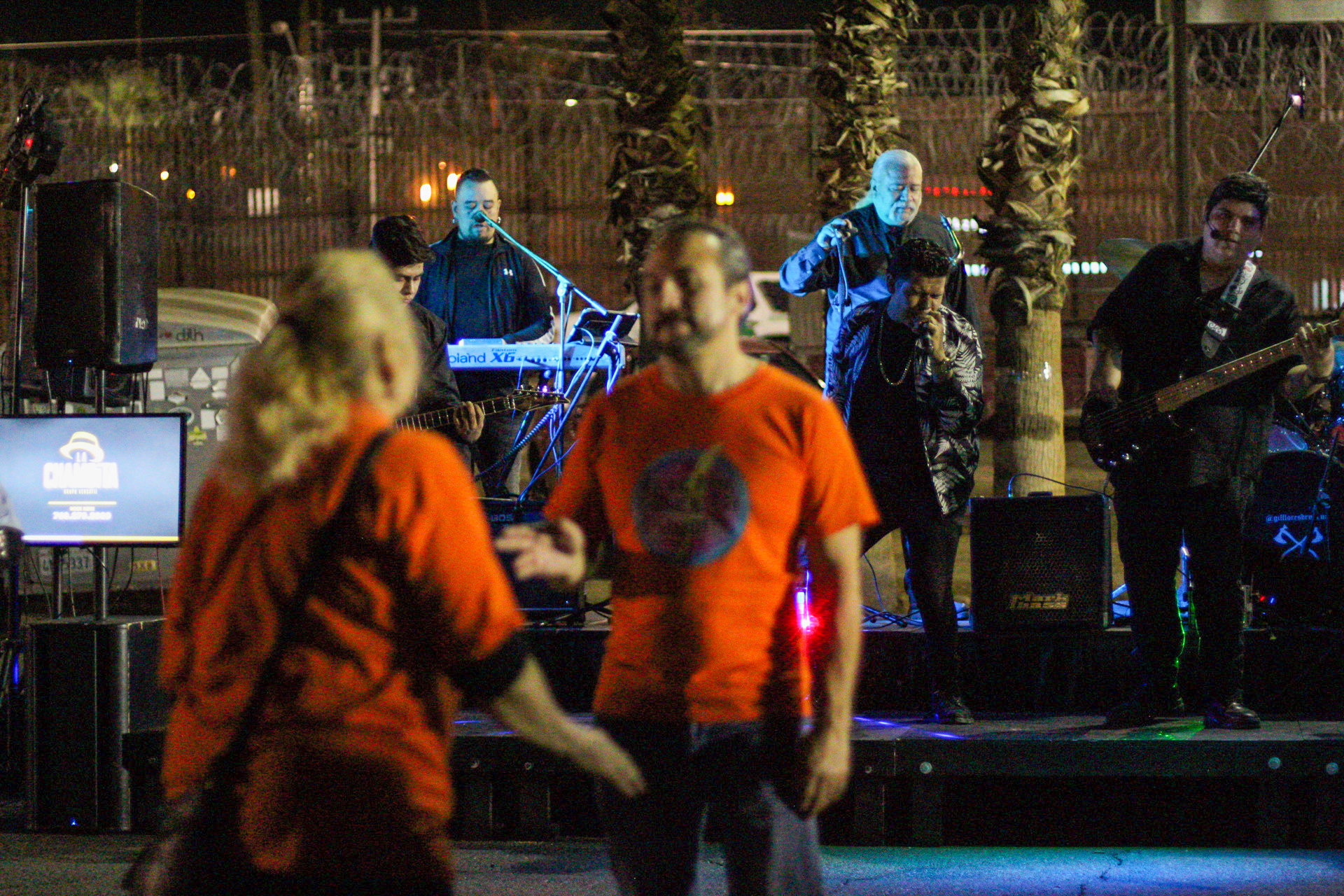 CALEXICO — The city of Calexico’s Feria Pa La Raza festival provided an abundance of sights, smells, and sounds the likes of which have not been assembled in an outdoor setting here since the onset of the pandemic.

Typical of such an event was the sounds of chattering people and live music. Less common was having taco vendor Pedro Ortiz proclaiming that the fare from his local restaurant, Crazy Bull Inc. Taqueria, precluded anyone from ever having to go to Mexicali for tacos again.

Such an assertion was perhaps marketing bluster on his part. Yet Ortiz, who up until about three years ago had been a longtime merchant at the now-closed Santo Tomas Swap Meet, did also express deep gratitude for the opportunity to take part in the event.

“We have to give back to the city what it has given to us,” Ortiz said in Spanish to anyone within earshot. “We have to lift up this place, which currently needs a lifeline.”

Indeed, the free outdoor event, which was held on First Street between Heffernan and Mary avenues on Thursday, Oct. 28, was billed as just that by the city.

“The event is the reflection of a Calexico community organizer and city administration coming together to host a community event that the city of Calexico has been in dire need of throughout the pandemic,” said City Manager Miguel Figueroa, who was on hand during the event.

Judging by the size and festiveness of the crowd, it was everything the city could’ve hoped for. Hundreds crowded First Street during the five-hour event that also featured a costume contest and a variety of food and craft vendors, and informational tables set up by local organizations.

Nor is it expected to be the last.

“This is just the first event of many that will be regularly scheduled that will highlight the different sectors of our business community,” Figueroa said.

Yvette Vega, who lives near where the event was situated, said she was not aware of the street fest until it materialized outside her front door that day.

Vega said she enjoys community events whether they are in Calexico or other Valley locales and, in the past, has been a vendor at the city-sponsored farmers markets. Still, her presence at the Feria Pa La Raza was largely owed to her daughter, Natelly Vega.

“As soon as I walked through the door she said, ‘Let’s go over there,’” the elder Vega said.

Preparations for the event took about six weeks. The city worked closely with event organizer and Calexico resident Jose Luis Contreras to make it happen.

The city’s efforts included filling potholes along the roadway and in a parking lot where the street fest was situated, as well as expediting the business license application process, City Council member Raul Ureña said.

The expedited application process resulted in some 31 local vendors newly registering for the event and is also expected to facilitate vendor participation in future community gatherings.

“The people said we want this, and the people got what they asked for,” Ureña said.

Much credit is owed to the city’s newly hired Planning Department Director Lisa Tylenda, as well as Public Works manager Liliana Falomir. Tylenda assisted organizers and participants with the requisite paperwork, while Falomir ensured that the site’s physical infrastructure was in optimal condition, Ureña said.

“They moved very quickly around the clock,” he said.

The collaborative experience is expected to pay further dividends as the city prepares for upcoming community events. Some of those include the Nov. 6 grand opening of Dawgs Hot Dogs, to be celebrated again at First Street and Heffernan Avenue, and which will include a beer garden, additional food vendors and live music.

The Mexican consulate in Calexico is also partnering with the city to host an outdoor event to commemorate Mexico’s Dia de La Revolucion on Nov. 20 in the city’s downtown area. That event is expected to serve alcoholic beverages, as well, Ureña said.

“That’s going to be a bigger cultural event that will last longer,” he said.

To make the city more business-friendly, the City Council also recently approved significant reductions in its development fees that are expected to make it easier than ever to modify a commercial or residential structure. Sidewalk vendors have been legalized as well, and can operate year-round, Ureña said.

The city’s business-friendly atmosphere is one reason that Marcie and Alex Morales of El Centro decided to open their CBD and hemp product boutique, called La Flor Milagrosa, in July.

“We fell in love with the city,” Marcie said.

“Look how welcoming it is,” Alex said, as he gestured toward the large crowd during the Feria De La Raza.