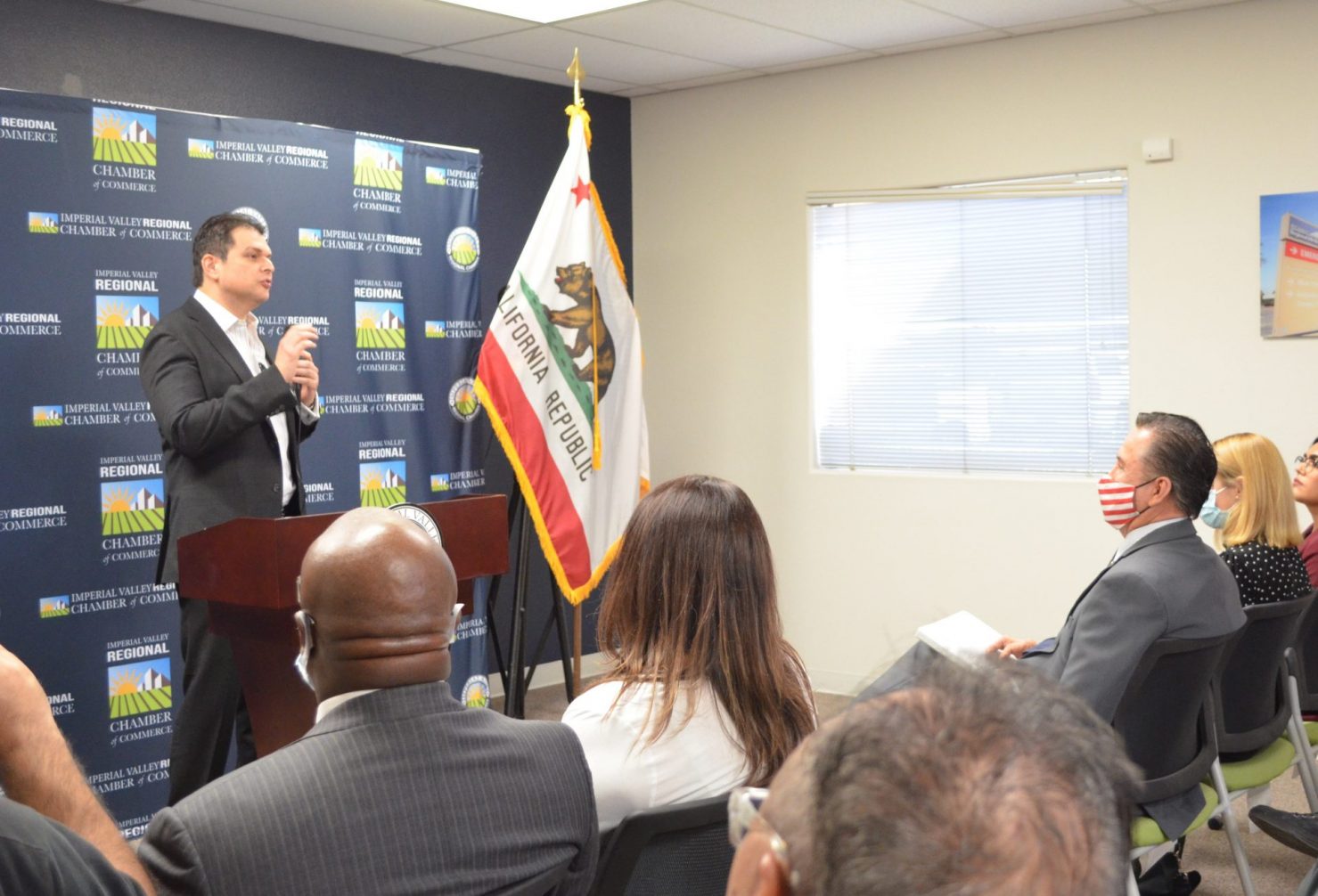 EL CENTRO — The cross-border tourism and trade that exists between the Imperial and Mexicali valleys should be viewed as essential to the regions’ well-being and survival as oxygen is to a living organism.

That’s the analogy that Imperial County District 1 Supervisor Jesus Eduardo Escobar used to describe how current restrictions on nonessential travelers from Mexico have deprived the Valley of a life-sustaining element.

But with U.S. Customs and Border Protection’s scheduled Nov. 8 lifting of that restriction, Escobar said, the Valley could expect to breathe a little easier amid the ongoing COVID-19 pandemic.

“We need this oxygen,” Escobar said during a press conference that the Imperial Valley Regional Chamber of Commerce hosted at its offices in El Centro on Wednesday, Oct. 27. “Imperial County needs this oxygen.”

The chamber-sponsored event allowed Escobar and about a dozen other speakers to talk about the challenges that the county has faced because of cross-border travel restrictions and border delays.

The event also allowed speakers to highlight their sustained advocacy efforts that, they said, helped prompt the federal government to lift the restriction on nonessential travel from Mexico and expand hours of operations at the Calexico East Port of Entry.

“We depend highly on the Mexican economy and the foreign nationals coming into our cities, into our counties and providing that fiscal stimulus, that small business income that we have lost for so many months,” Escobar said. “We’re very thankful to regional CBP, to national CBP, to our elected officials at the federal level for making this happen.”

Nonetheless, challenges remain. Escobar said the pending lifting of the nonessential travel restrictions for Mexican nationals will likely result in a glut of north and southbound cross-border vehicle traffic that Calexico may not be in the best position to accommodate, especially with the holidays approaching.

That issue is something the city of Calexico is focusing on at the moment and officials there were expected to make an announcement on transportation-related issues at the next Calexico City Council meeting on Wednesday, Nov. 3.

That the federal government decided to lift the restriction against tourist travel from Mexico is also largely owed to the advocacy efforts of the Valley’s neighbors to the west and east, as well.

“I want to thank the city of San Luis (Arizona) and Yuma who, after the efforts here in Imperial County, also took up arms in letters and directed their border voices towards Washington,” said Calexico council member Raul Ureña, who expressed similar gratitude to San Diego County officials for their advocacy efforts.

And considering how the overarching theme of the day’s gathering was to highlight how much the Valley’s economy, and Calexico’s in particular, benefits from cross-border traffic, Ureña translated his remarks into Spanish and added a heartfelt “Viva Mexico!” and “Viva Latin America!” for good measure.

Aside from the economic impact that restricted border crossings have had on the Valley amid the pandemic, such constraints may present an added barrier to accessing higher education, Imperial Valley College interim President-Superintendent Lennor Johnson said.

Enrollment at the campus is down 18 percent compared to 2019. And though the reasons for the reduction remain largely unknown to campus officials, Johnson did not hesitate to state that restricted border crossings did not help the situation.

Closed borders also present challenges to binational higher educational partnerships such as the one that IVC is in the process of finalizing with Centro Enseñanza Tecnica y Superior (CETYS) Universidad in Mexicali. Once approved, it would require students attend IVC for two years, followed by an additional two years at CETYS, from where they’d get a bachelor’s degree.

Such partnerships are essential for keeping local talent in the region, instead of having them relocate to larger metropolitan areas in search of better employment opportunities, Johnson said.

“This to me this is an equity issue, as well as an access issue,” he said, referring to the cross-border travel restrictions.

Though exact figures aren’t available for just how much of an economic impact the Valley may have sustained because of the COVID-related cross-border travel restrictions, data from 2016 related to economic losses associated with prolonged border wait times suggests the figure may be in the hundreds of millions.

In 2016, prolonged border wait times contributed to an economic output loss in the Valley of about $890 million, as well as about $312 million in lost revenue, said Mark Baza, Imperial County Transportation Commission executive director.

Similarly, a survey the county conducted in 2017 of border crossers revealed that those travelers were spending an estimated $1 billion in the county on an annual basis, Baza said.

While the closing of the nation’s borders to nonessential travelers coincided with the shutdowns that were implemented at the state level, the federal government did not eventually lift its restrictions as the state itself began to, causing something of a misalignment in policies, El Centro council member Tomas Oliva said.

That disparity was not overlooked by the county’s state and federal elected representatives, who also helped persuade the federal government to reopen the borders.

“With all of us speaking the same voice and having the same message, that’s why we saw action sooner rather than later,” Oliva said.

With Thanksgiving and Black Friday fast approaching, Robert Gronich, owner of Garland’s department store in Calexico, said he is looking forward to a return to a sense of normalcy.

As difficult as the pandemic has been on this 61-year-old business, Gronich said he is equally grateful for the pandemic-related financial assistance that was made available by the local, state, and federal governments.

“We want to lift up our business. We want everybody to lift up their businesses,” Gronich said. “We need that border to operate efficiently.”

Next
IID Directors’ Infighting Spills Out in Open