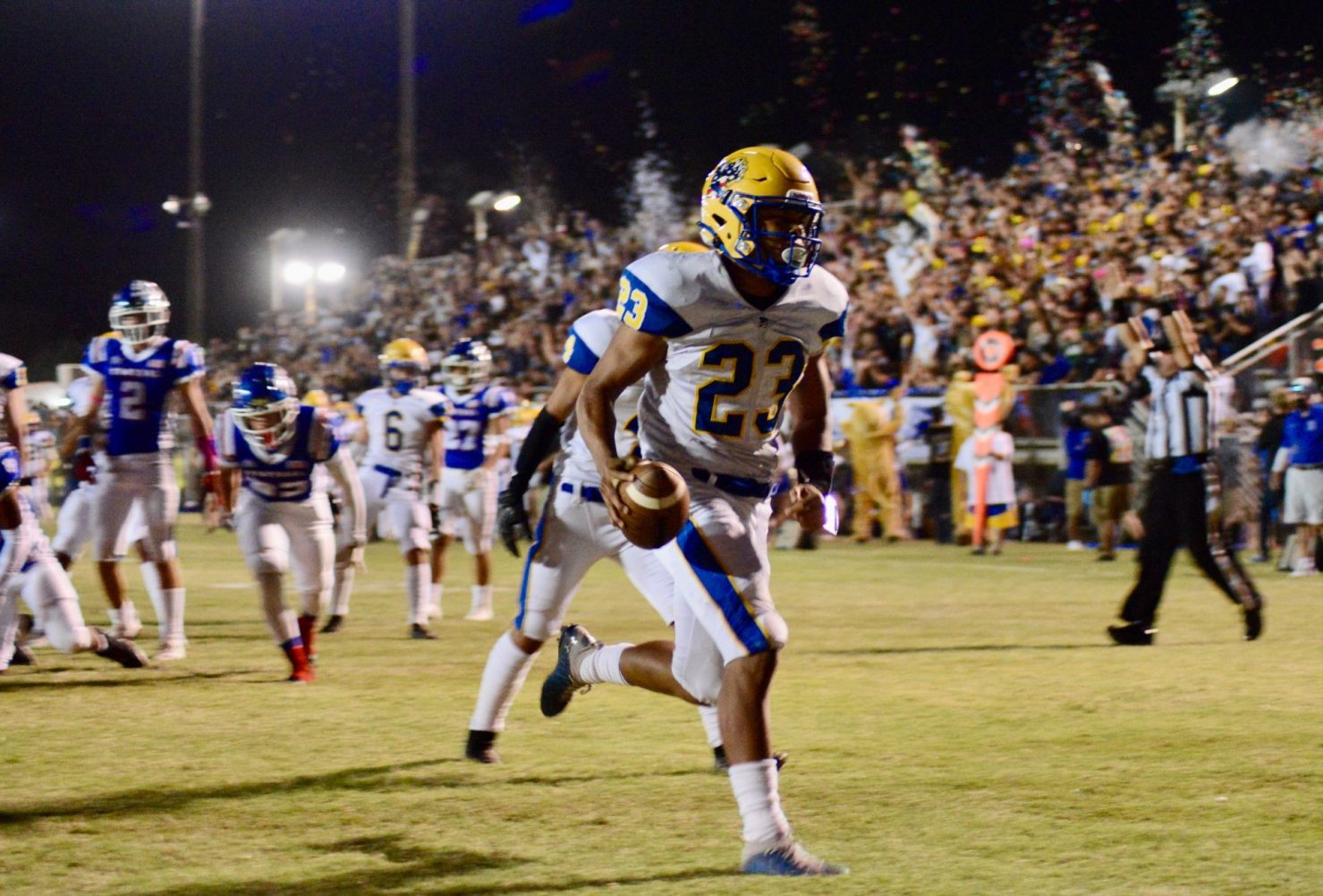 Brawley Union High senior Isaiah Young scores a touchdown for the Wildcats against Central as they beat the Spartans 34-21 in the annual Bell Game at Cal Jones Field in El Centro on Friday, Oct. 29. | MARIO RENTERIA PHOTO
Home
Sports
In Sports

The victory snapped a four-year losing streak for the Wildcats in the annual Bell Game and a four-year drought without winning an IVL title.

“I was expecting to do anything I had to do to get the win” Young said of his four-touchdown performance. “I’m proud of our team and everybody.”

With the win, the Wildcats finish the regular season 8-2 overall and 4-0 in IVL. They turn their focus to the CIF-San Diego Section Division III playoffs where they were ranked sixth going into Friday’s game. The league championship assures Brawley of a spot in the playoffs.

The Spartans finished 5-5 overall and 3-1 in league and entered the contest ranked 10th in Division II. Playoff matchups will be announced on Saturday, Oct. 30.

“It’s a Bell Game classic,” said Jon Self, Brawley’s head coach. “Two teams that are fighting for the league championship, the Bell … just another great (game) to put down in the books.”

In Friday’s game, Young opened the scoring with a seven-yard touchdown run with 8:05 left in the first quarter. Senior kicker George Haro kicked the extra point and the Wildcats took a 7-0 lead.

The ball changed hands after a pair of turnovers, a fumble recovery by Brawley senior nose guard Anthony Arriaga and an interception by Central senior defensive back Joel Gonzales-Valdez, respectively.

That set up a 38-yard pass from Central junior quarterback Damian Rodriguez to freshman receiver Sergio Garcia to Brawley’s four-yard-line. Junior running back Charlie Sullivan finished the drive with a four-yard run. Junior kicker Mylas Rodriguez added the point-after and the score was tied 7-7 with 11:55 left in the second quarter.

The Wildcats had another pair of turnovers against them, an interception and fumble. Central capitalized on one of them when Garcia caught a 4-yard pass for a touchdown from Rodriguez. The extra point was no good, but with 6.7 seconds left in the first half, the Spartans had a 13-7 lead.

Young extended Brawley’s lead with two more touchdowns on runs of 40 and 38 yards, respectively, in the fourth quarter. With successful Haro extra points, the Wildcats took a 28-13 lead with 3:28 left to play.

The Spartans tried to rally when Rodriguez connected with Sullivan for a 25-yard touchdown pass. After a successful two-point conversion, the Wildcats’ lead was cut to 28-21.

Central opted for an onside kick attempt, but it was recovered by Brawley junior Gilbert Corrales. Wildcats junior quarterback Ethan Gutierrez then ran it 13 yards for a touchdown and the final score of the night, 34-21.

“Hats off to Brawley, they did a good job with their run game,” said Central head coach David “Rookie” Peña. “I’m very proud of our kids and how they fought.”