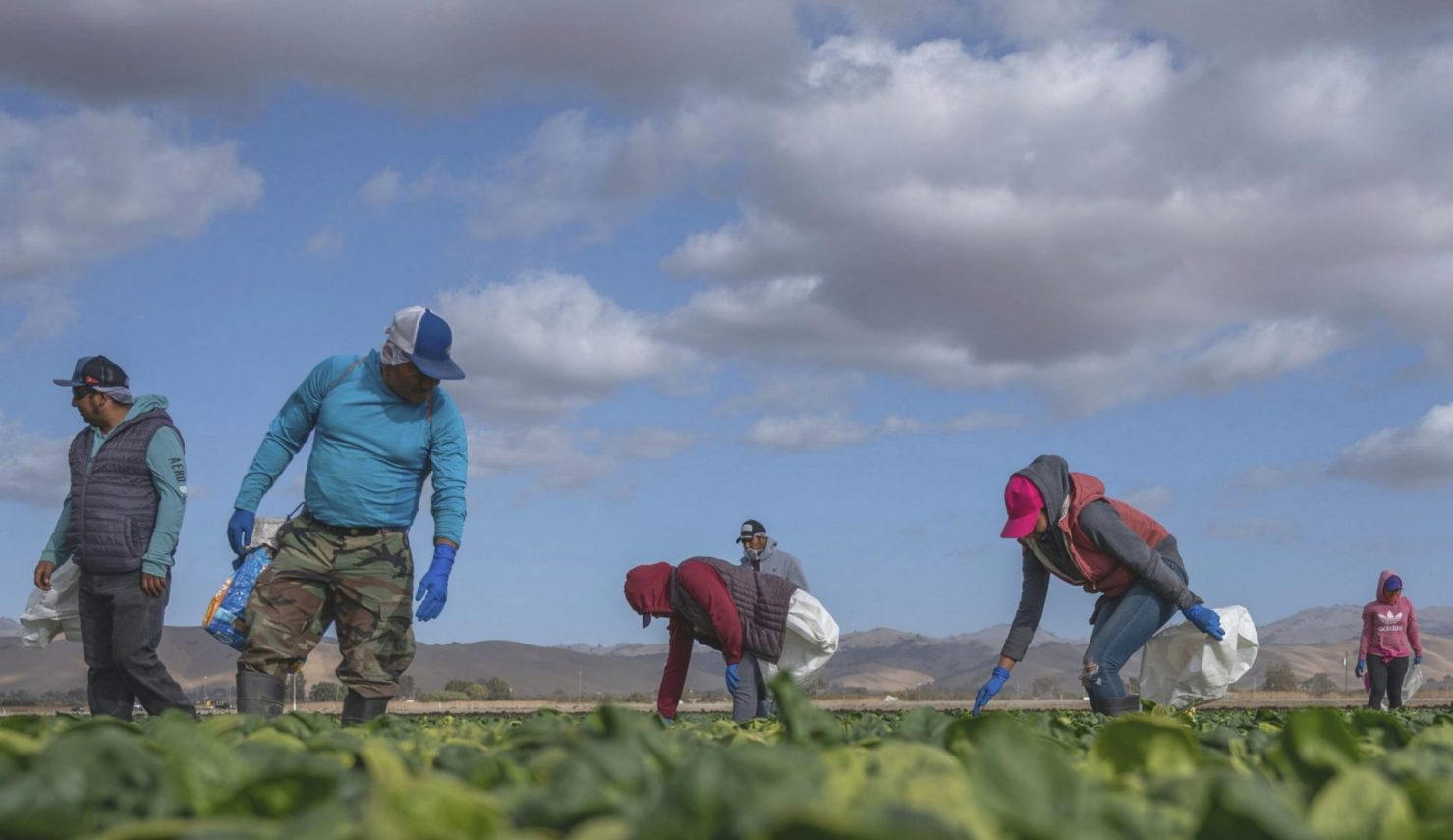 Farmworkers toiling in the fields of the Central Valley are shown on the cover of a report on agricultural workers during the pandemic. On average, studies support, farmworkers lag furthest behind other groups in terms of vaccination rates. | PHOTO BY HECTOR AMEZCUA/CAES\UC DAVIS
Home
Agriculture
In AgricultureCOVID-19

Agricultural workers in Kern County have one of the state’s lowest rates of COVID vaccination, due to a lack of stable housing, food insecurity, limited access to sites where the vaccine is available, and vast amounts of disinformation via person-to-person exchanges along with social media.

Kern County is considered to be at a very high-risk level with almost 38 new cases a day. Hospitalization and death rates have dropped slightly this month, after a dramatic rise in September.

Agricultural workers in California, including those working in food processing, have the second-highest rate of pandemic-related deaths, second only to warehouse workers. The agriculture labor force in California is comprised primarily of new immigrants, with average wages of just $14,000 per year.

“The Central Valley was a hot spot for COVID spread in 2020; agricultural workers experienced a much higher risk of pandemic related death in 2020 compared with other workers. Across the US, agricultural workers still have the lowest rates of vaccination,” said Edward Flores, assistant professor of sociology and co-director of the University of California Merced Center on Labor and Community.

Speaking at an Ethnic Media Services Oct. 20 news briefing cosponsored by the Center at the Sierra Health Foundation, Flores made a correlation between the lack of stable housing and food insecurity and resulting low vaccination rates. “When we see low rates of vaccination among agricultural workers, this is really a symptom of a much deeper problem,” he said, noting that the public health focus in this region must be on expanding safety nets.

Similarly, only 39 percent of people without health insurance are vaccinated. Those facing evictions within one or two months had vaccination rates of about 35 percent, he said, drawing upon initial data from the Census Bureau’s Household Pulse Survey.

Other speakers at the briefing were: Juana Montoya, a community organizer with Lideres Campesinas, the largest association of farmworker women in the state; Margarita Ramirez, a Mixtec community worker with Centro Binacional which advocates for indigenous farmworkers across the Central Valley; Deep Singh, executive director of the Jakara Movement representing Sikhs and a member of the Fresno Board of Education; and Sarait Martinez, executive director of Centro Binacional.

Juana Montoya — the daughter of farmworkers who dropped out of high school in her freshman year to join her parents in the fields — worked through the pandemic in a cold storage facility, packing grapes to be shipped off to Australia. She and her husband typically began their days at 4:30 a.m., readying their kids for school or for a babysitter before waiting for the van that would deliver them to work. They frequently worked Saturdays, and on Sundays, “we’d go to church, and do grocery shopping so we wouldn’t have to go out during the week.”

“A great fear I always had was having to carpool to our working site, and not knowing if anyone in the vehicle was infected with COVID,” she said.

Women agricultural workers face a barrage of disinformation from their communities and social media. “We have to tell them there is no chip to track them. There is no negative effect. You don’t lose your fertility,” Montoya said.

Immigration status is also why many have not gotten the vaccine, Montoya added, noting that many farm workers lack legal documents and fear giving personal information to the government. Other barriers are a lack of internet access, reliable transportation, and language issues.

She advocated for bringing vaccination sites to where people work and congregate in the community. “We literally don’t have time at work to find out about vaccines,” she said.

Margarita Ramirez, a mother of six who is fluent in Mixteco and Spanish, said that during the pandemic, many farm workers faced greatly reduced hours. Those that were working were forced to continue working, even if they were sick. Many speak an indigenous language, not Spanish, which made it difficult to access services offered by the county and state.

Martinez, an indigenous Zapotec from the state of Oaxaca, Mexico, spoke about a report her organization had just released on the realities in the lives of indigenous campesinos, the result of a collaboration between several community-based organizations.

“Campesinos have a deep respect for a knowledge of that land, and we are really expert in agriculture and food production, because it’s rooted in ancestral and sustainable agricultural practices that have carried on for generation. That’s really what carries this multibillion-dollar agriculture economy in the state,” she said, adding that many indigenous campesinos speak Spanish as a second language, but the vast majority are monolingual in their indigenous languages, which makes accessing credible information difficult.

Indigenous communities, like many other communities of farmworkers, also lost wages because of a reduction in hours, resulting in unlivable salaries for already low-wage workers, said Martinez.

“Even though the resources are there, they’re really nearly impossible for our community to navigate, to have all the requirements in to navigate and to go through the process, because institutions are not equipped to serve our community in their language and the culture that they deserve.”

Martinez noted the anxiety and stress in the community over the inability to pay for basic needs, such as food, childcare, and rent, combined with not being able to take sick time off.

Deep Singh said the history of the Punjabi community in Kern County dates back more than 100 years. Younger Punjabis are not interested in agricultural labor; workers in the fields are mostly older, or newly arrived immigrants.