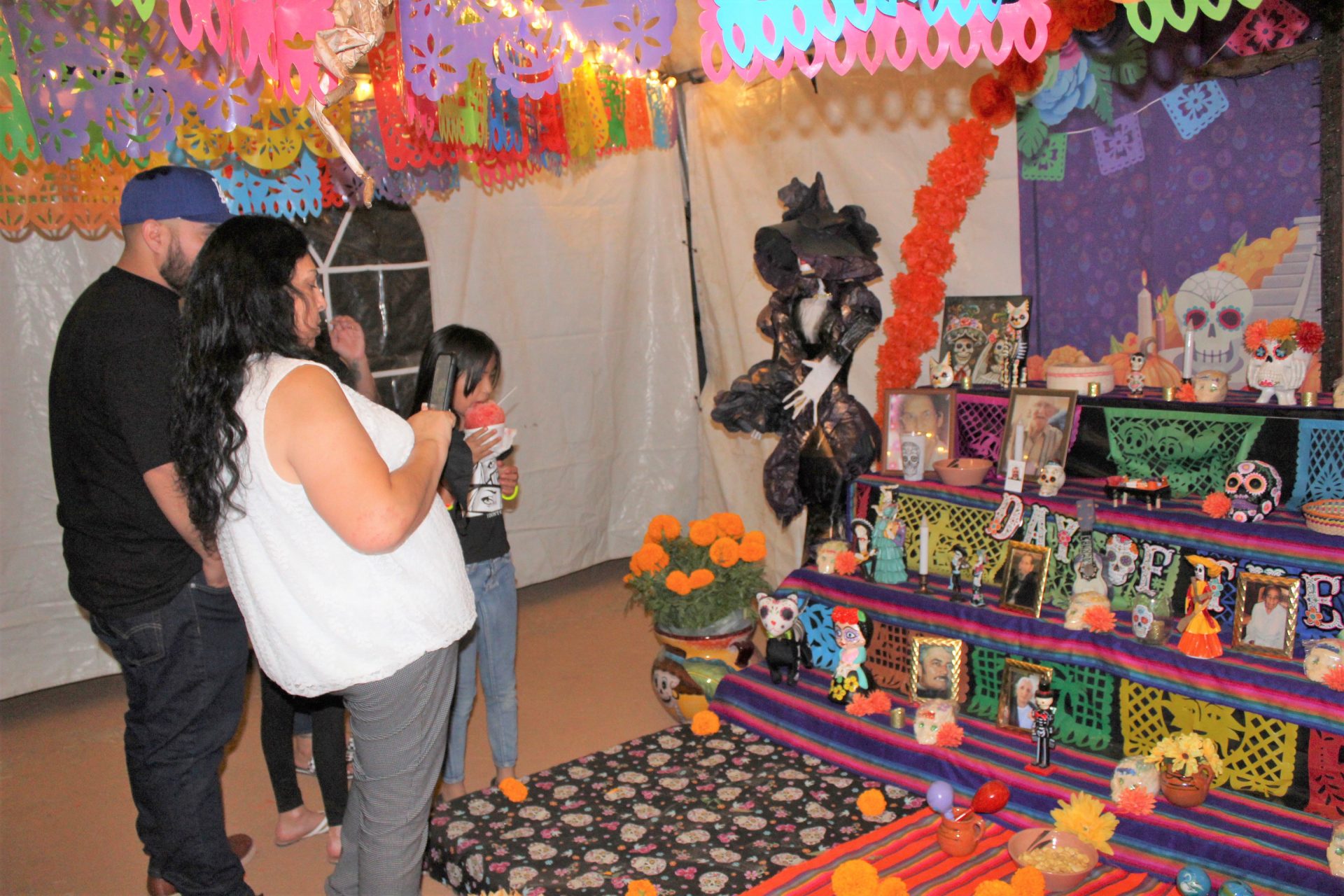 Oscar "Bosco" Perez's family gathered Saturday night, Oct. 30, to see his picture on the Heber community ofrenda and honor the memory of the man who would play baseball on the fields at Margarito “Tito” Huerta Jr. Park in Heber. | KATHERINE RAMOS PHOTO
Home
Regional News
Share

HEBER — Oscar Perez, better known as “Bosco,” was a familiar name and face in Heber. He was an avid baseball player in his youth, an employee of NASA, and a baseball coach for children’s baseball leagues.

His wife, along with the rest of his children, grandchildren, and nieces and nephews placed his photograph at the Heber Día de los Muertos community altar, or “ofrenda,” in Margarito “Tito” Huerta Jr. Park, the very park where Perez coached baseball, to honor him and his memory on Saturday, Oct. 30, during the annual Heber Fall Fiesta.

“It feels good to honor him here tonight,” his wife said while she watched from a distance.

His was just one of many photos placed on the Día de los Muertos community altar. Many gathered in the park to pay their respects and remember those who have passed on as well as have fun at the fiesta, which was just north of the ofrenda.

The Heber Public Utility District, which functions as the community’s form of “municipal” government as an unincorporated area of Imperial County, has been putting up the ofrenda for the past three years. Saturday’s altar was the largest yet, and Alexis Estrada knows it is going to get bigger and bigger each year as people hear more about it.

Estrada, who is recreation coordinator for the Heber utility district, said she plans to bring her own small framed photo to add to the ofrenda later in the week.

Those from around Imperial County, not just Heber, gathered at Tito Huerta Park for the end of a day of festivities that started with the annual Heber Fall Fiesta Parade in the early afternoon. The parade ended at the park where a car show was taking place.

The Fall Fiesta was on the north side of the field with vendors. There were 14 free carnival game booths for youths, thanks to community nonprofit, Proyecto Heber, and utility district.

At night, the south corner of the baseball field stood the ofrenda — two actually; one for loved ones to place photo or paper flowers, and on the side was a second display with lights, poems, and more paper marigolds (the traditional Aztec flower associated with Día de los Muertos) to represent the 29 Heber residents who have died due to COVID-19.

The sound of the party atmosphere on the other side of the field died down as people got closer to the ofrenda, creating more of a private and intimate area, Estrada said. Residents had the opportunity to place what they wished for their love ones, be it photos, a candle, or the paper flowers with names written on the tags.

Heber Public Utility District General Manager Laura Fischer was on site Saturday and put her mother and father’s names on one marigold to place at the altar.

Dianara Gonzalez, who came out to the fiesta with her cousins and stopped by the ofrenda to see the picture of her “Tata” her sister had put up, was happy to see such a display.

“It feels nice that we can put them out here in the public,” she said.

Some new additions to this year’s ofrenda was a blessing from Father David Sereno of Heber’s Sacred Heart Mission, who blessed the altar and those attending the ceremony. This will also be the first year it will stay open the whole duration of the Día de los Muertos.

Carmen Mendoza came out with her family to celebrate not just Día de los Muertos but to enjoy all of the fiesta. She said she was very proud to see Mexican culture being represented and celebrated out in Heber and was a bit sad nothing was being down in the other cities like El Centro, where she is from.

“I’m very excited that people still believe in Mexican cultures. I’m very proud of the people of Heber for doing something,” Mendoza said.

“It just seemed nice, a Mexican tradition, it’s just so beautiful,” Heber resident Cynthia Collazo said. “And it’s just nice to be out, too.”

The fiesta itself is becoming a tradition for Heber that brings the small community together and helps to give it an identity, General Manager Fischer said.

“It’s such a vibrant community here and so tightknit, so many people needed that identity, so we started the Fall Fiesta,” Fischer said. “It really does meets one of our goals, which is to help grow our community, which is a special place to live, and to have a sense of community and not just be a little town outside of El Centro.”

Fischer gives most of the credit to the district and the people of Heber for pulling the fiesta together this year. In a year that has not been ordinary, she feels they did a great job bringing it all together for the community.

The Día de los Muertos ofrenda will stay up until Tuesday, Nov. 2, the actual Day of the Dead. The field will be open to the public from 6 to 10 p.m. with security around to keep everyone safe and comfortable.

Next
Ag Workers Lag Furthest Behind in Vaccinations