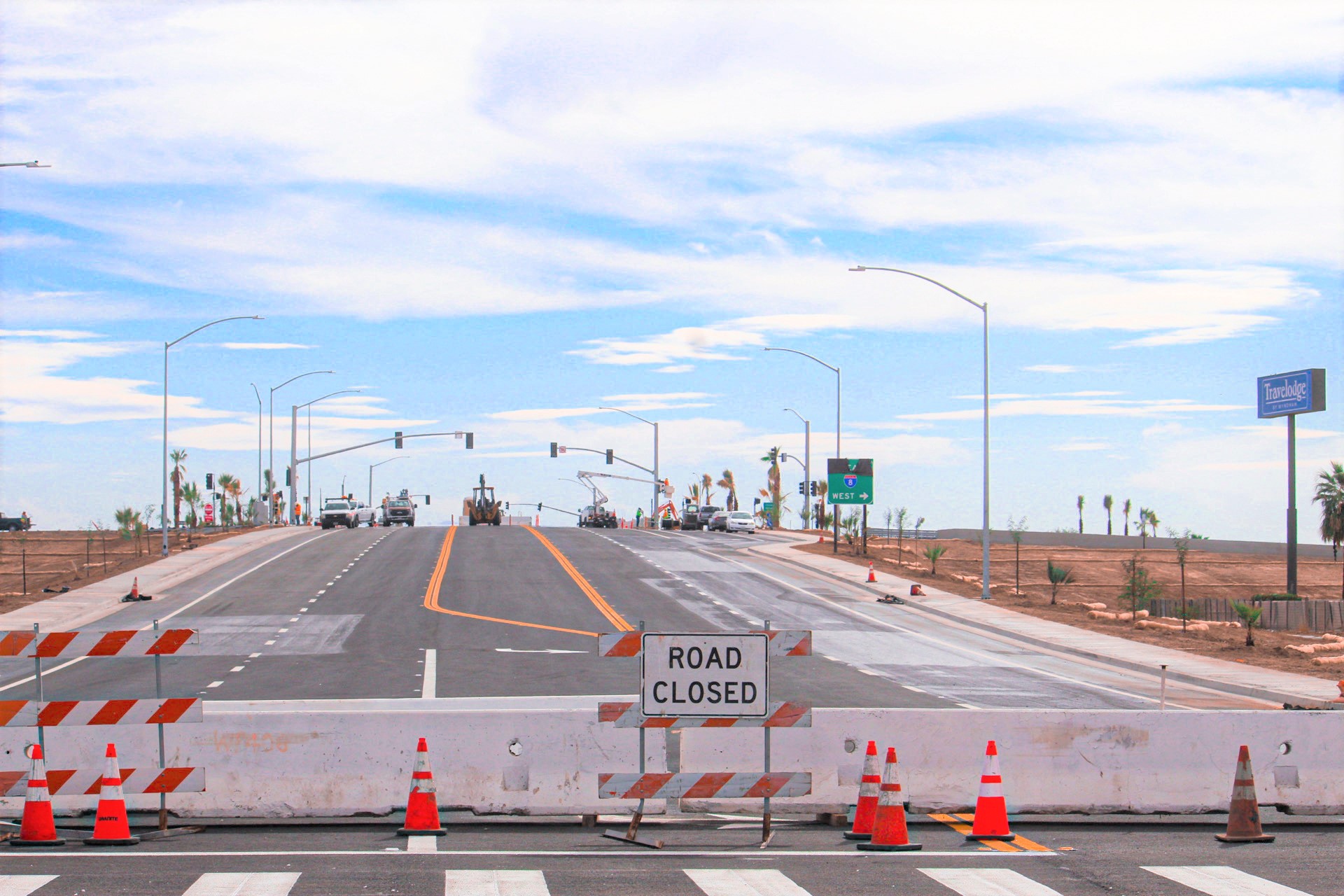 Road closure signs keep motorists from heading south on Imperial Avenue toward the on and offramps leading to Interstate 8. On Thursday, Nov. 4, the closure barriers will be moved and the westbound on and off ramps will open to traffic, ahead of a projected January end of construction on the overall interchange project. | MEGAN JONES PHOTO
In Regional News

EL CENTRO — Legend has it that when the Interstate 8/Imperial Avenue interchange was built decades ago, the roadway was not extended south of the freeway because of local merchants’ desires to funnel traffic and consumers’ dollars into the city and not away from it.

Yet, while Mayor Cheryl Viegas-Walker could not vouch for the veracity of that bit of “folklore,” she did acknowledge that city planners have for decades been advocating for Imperial Avenue to be expanded southward and have its corresponding on and offramps added onto the freeway.

Now, with the pending completion of the $44 million I-8/Imperial Avenue interchange project projected for January, the city is set to celebrate the addition of those onramps and offramps, and further advance its plans to expand Imperial Avenue south from the freeway to McCabe Road.

“What we’ll see is a continuation of the expansion of both residential and commercial development along that corridor as we punch through to McCabe,” Viegas-Walker said.

And while the Imperial Avenue bridge and eastbound ramps are not projected to open until January, Caltrans will open the westbound Imperial Avenue on and offramps on Thursday, Nov. 4, a spokesperson said.

“The westbound ramps do not require bridge access and can be opened sooner for the benefit of the community,” said Cathryne Bruce-Johnson, Caltrans District 11 spokesperson.

Going forward, Caltrans anticipates potential overnight or daytime partial lane closures on I-8 for various work that is adjacent to the routes of travel, Bruce-Johnson stated in an email Monday, Nov. 1.

The two-year project is slightly behind schedule due to weather days and non-working days but remains on budget. Additionally, Caltrans had seen a delay in delivery times for some construction materials for the interchange project because of the apparent disruptions in the global supply chain, Bruce-Johnson said.

Funds for the project came from the State Regional Improvement Program and the Federal High Priority Projects Program that were previously provided to the Imperial County Transportation Commission.

With the pending opening of the westbound ramps, the queueing of motorists along the detour route at I-8 and Fourth Street is expected to be relieved, Caltrans stated.

The pending completion of the interchange and roadway expansion project is also expected to provide many motorists with a convenient way to reach destination points south of Interstate 8 via Imperial Avenue.

“We’re just so happy to see this project being completed,” El Centro City Manager Marcela Piedra said. “It’s going to improve circulation in the southern portion of the city.”

The city had planned to host a press conference on Wednesday, Nov. 4, to announce the partial opening of Interstate 8 at Imperial Avenue. Instead, Caltrans sent out a press release the afternoon of Monday, Nov 1, with the latest update.

“It’s just a project worthy of celebration for us,” she said during a phone interview Monday.

Construction on the two-year interchange project began in early 2020 to demolish the Imperial Avenue bridge and eastbound on/offramps. The bridge was then reconstructed, as were the on/offramps in both directions.

All of the concrete from the bridge demolition was crushed and incorporated into the newly created embankments, Caltrans stated. The steel rebar was removed and made available for recycling by the contractor.

The bridge’s reconstruction had required the relocation of some infrastructure, including an Imperial Irrigation District drain, a major city waterline that connected the city’s water plant south of the freeway to residents to the north.

Additionally, a major sewer lift station that conflicted with the footprint of the new four-lane bridge had to be relocated, city Public Works Director Abraham Campos said.

“Some of the right of ways were acquired by Caltrans while others by the city of El Centro, always working in coordination with each other,” Campos stated in an email on Monday, Nov. 1.

As significant as the interchange project is, its undertaking took a back seat to other local transportation projects that had been considered more of a priority through the years, said Mark Baza, Imperial County Transportation Commission executive director.

“To be able to accomplish this, for however many years it’s been in the long-range plan for Imperial County, it’s very important,” Baza said in a phone interview on Monday, Nov. 1. “We’re very excited as a region, and I’m sure the city of El Centro is ecstatic over this.”

Much of that contentment is owed to the project’s anticipated relief of traffic in the central part of the Valley, where most of the traffic has been focused at either Dogwood Road or Fourth Street, Baza said.

Even though it is not a Level One trauma center, any delays that a patient may experience in arriving at the hospital is of the utmost concern for ECRMC officials.

“Of course, the one thing that we always want to make easy for people coming through the highway is access to the emergency room and the hospital,” Edward said on Nov. 1. “So, with (the interstate) opening up again this is going to be a good thing for anybody that’s traveling.”

Edward also expressed gratitude toward Caltrans for having installed a blue traffic sign advising motorists of the direction of the hospital in advance of the eastbound freeway exit for Forrester Road, which had served as a detour for the closed Imperial Avenue interchange.

As for the city of El Centro’s four-phase Imperial Avenue expansion project, much work remains to be done, Public Works Director Campos explained.

The project will extend from north of Wake Avenue to McCabe Road and required the acquisition of rights of way to allow for roadway and utility relocations.

“Utilities currently in process of being relocated include an IID drain, an IID canal and a major IID power transmission line,” Campos said.

Phase 2 calls for the extension of Imperial Avenue from Wake to Danenberg Drive and is funded at a cost of $3.2 million. Phase 3 will further extend Imperial Avenue to Valleyview Avenue, while Phase 4 will extend the roadway to McCabe Road. Phases 3 and 4 are not yet funded, Campos said.

The pending opening of the Imperial Avenue interchange is also expected to benefit snowbirds as they return to the Valley, said Daniel Sohn, Imperial Valley Regional Chamber of Commerce chief executive officer.

“Bringing them to the Valley is key and the reopening of I-8 and the interchange is certainly right up there as a priority,” Sohn said in a phone interview Nov. 1.