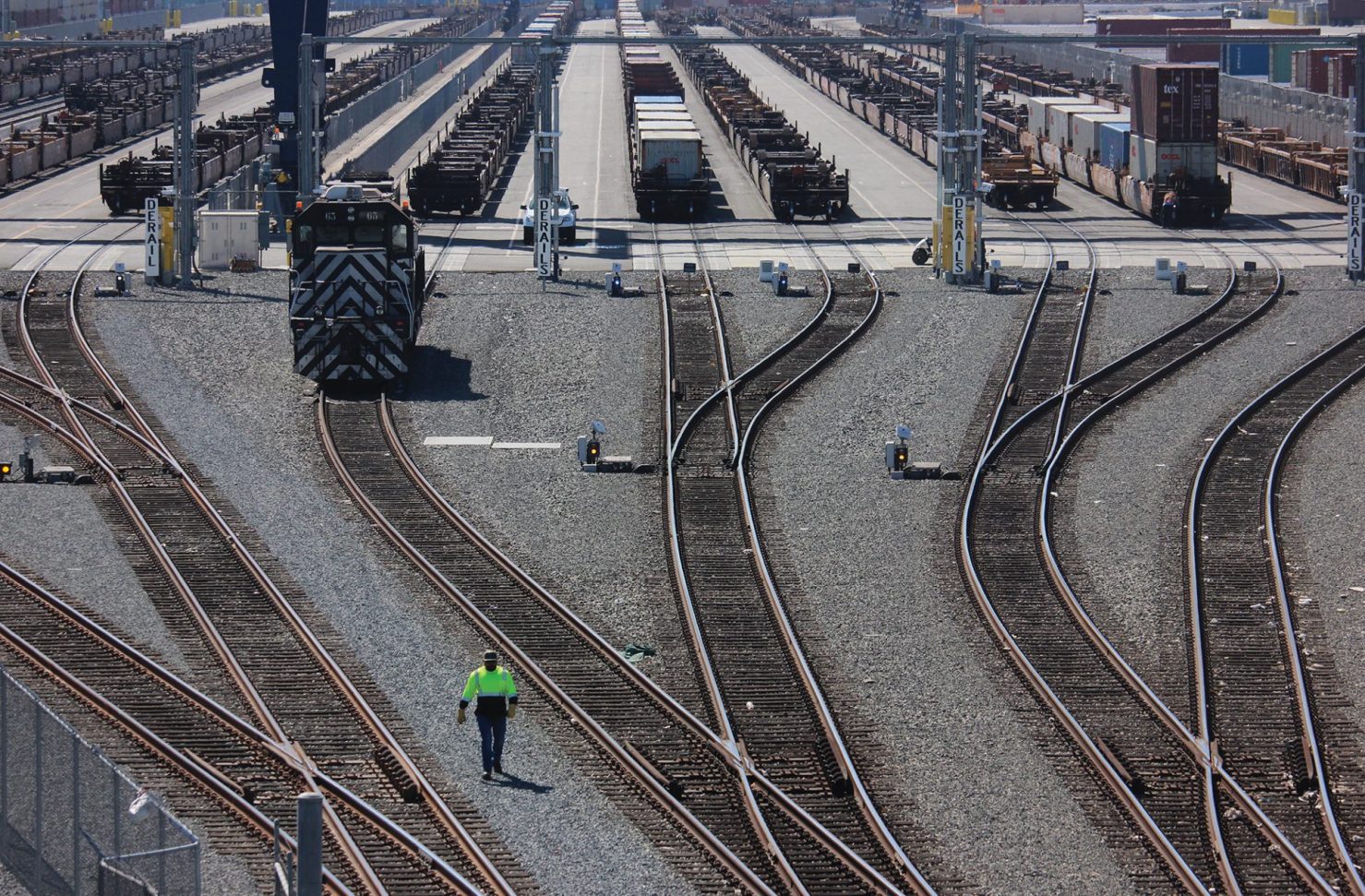 The U.S. Department of Transportation and Gov. Gavin Newsom recently announced a federal-state partnership, dubbed the Emerging Projects Agreement, to identify funding for infrastructure projects at California ports, including the San Pedro Bay complex that handles 40% of U.S. imports. While potentially in the billions, the funding would come in the form of loans to the Long Beach and Los Angeles port authorities.

The announcement on Thursday, Oct. 28, comes amid an unprecedented supply chain crisis that has been plaguing the twin ports since late last year. On Friday, Oct. 29, some 75 ships carrying hundreds of thousands of containers were anchored or adrift outside the two ports, waiting for their turn to dock, according to the Marine Exchange of Southern California.

The “partnership will ensure the creation of local infrastructure projects aimed at improving freight movement between the San Pedro Bay ports complex and distribution centers in the Inland Empire,” Port of Long Beach Executive Director Mario Cordero said in an email Friday. “This plan builds on our ongoing efforts to identify immediate and long-term solutions that will expedite cargo shipments and address an historic cargo surge and forecasted cargo growth.”

The program will be funded in part through two DOT credit assistance programs: the Transportation Infrastructure Finance and Innovation Act and Railroad Rehabilitation and Improvement Financing. Funding amounts were not identified in the announcement, and neither port has indicated there are any estimates.

The loans are meant to expedite a network of projects, rather than  moving forward with a “piecemeal approach,” according to the announcement. The funding could be used for port-specific upgrades, expanding rail capacity, developing inland port facilities for increased warehouse storage, highway upgrades and more. Spokesmen for both port complexes last week said the top priority would be on-dock rail expansion.

Both ports already have plans for numerous rail projects. In Long Beach, on-dock rail expansion accounts for $1 billion of the port’s projected $1.6 billion worth of capital improvement projects planned for the next decade, according to spokesman Lee Peterson.

Though created in response to the current supply chain crisis, the initiative will do little to alleviate the current backlog, both port spokesmen acknowledged in separate emails Monday. Rail projects take years to design, approve and complete.

The Pier B On-Dock Rail Support facility in Long Beach, for example, has been in the planning stages for over a decade. The $870 million project on the Westside is not slated for completion until 2032, after portions of tracks open in 2024 and 2030. The first phase alone will double the capacity of the existing Pier B rail yard.

Nonetheless, the funding would help ensure the ports do not face similar backlogs in the future, Port of LA spokesman Phillip Sanfield said.

“Having our federal and state transportation agencies working in unison to help fund infrastructure is exactly what we need,” Port of LA Executive Director Gene Seroka said in an email. “We have projects in need of funding that will reduce cargo delays, improve efficiency, reduce emissions and improve safety for waterfront workers and motorists throughout the region.”

The partnership is the latest in a series of steps taken to address the ongoing crisis. Locally, the San Pedro Bay ports have already implemented strategies to address the backlog, including a pilot program that expanded one Long Beach container terminal to 24-hour-per-day operations four days a week.

The most recent action taken by the port authorities was the announcement that a surcharge will be paid by shippers for every container that sits on the dock for extended lengths of time. The charge—$100 per container, which increases $100 per day—is likely to generate millions of dollars since 40% of containers currently fall into the categories outlined by the program.

Both ports’ boards of harbor commissioners voted last week to begin imposing the fee on Nov. 15.

On Oct. 20, Newsom signed an executive order formalizing efforts already underway to address supply chain shortfalls. At the federal level, the Biden-Harris administration created the Supply Chain Disruptions Task Force, which continues working with stakeholders across the supply chain to shift to a 24/7 model.

“Our supply chains are being put to the test, with unprecedented consumer demand and pandemic-driven disruptions combining with the results of decades-long underinvestment in our infrastructure,” U.S. Transportation Secretary Pete Buttigieg said in a statement. “That’s why this administration is working around the clock to address both near-term and long-term challenges to our supply chains, including investments such as those in the bipartisan infrastructure deal.”

(This story by Brandon Richardson of the Long Beach Business Journal first appeared in the Long Beach Post and is made available as part of the CalMatters Network.)

Next
‘I Don’t Recognize Myself Anymore’; How the Pandemic Drowned a Working Mom in Debt