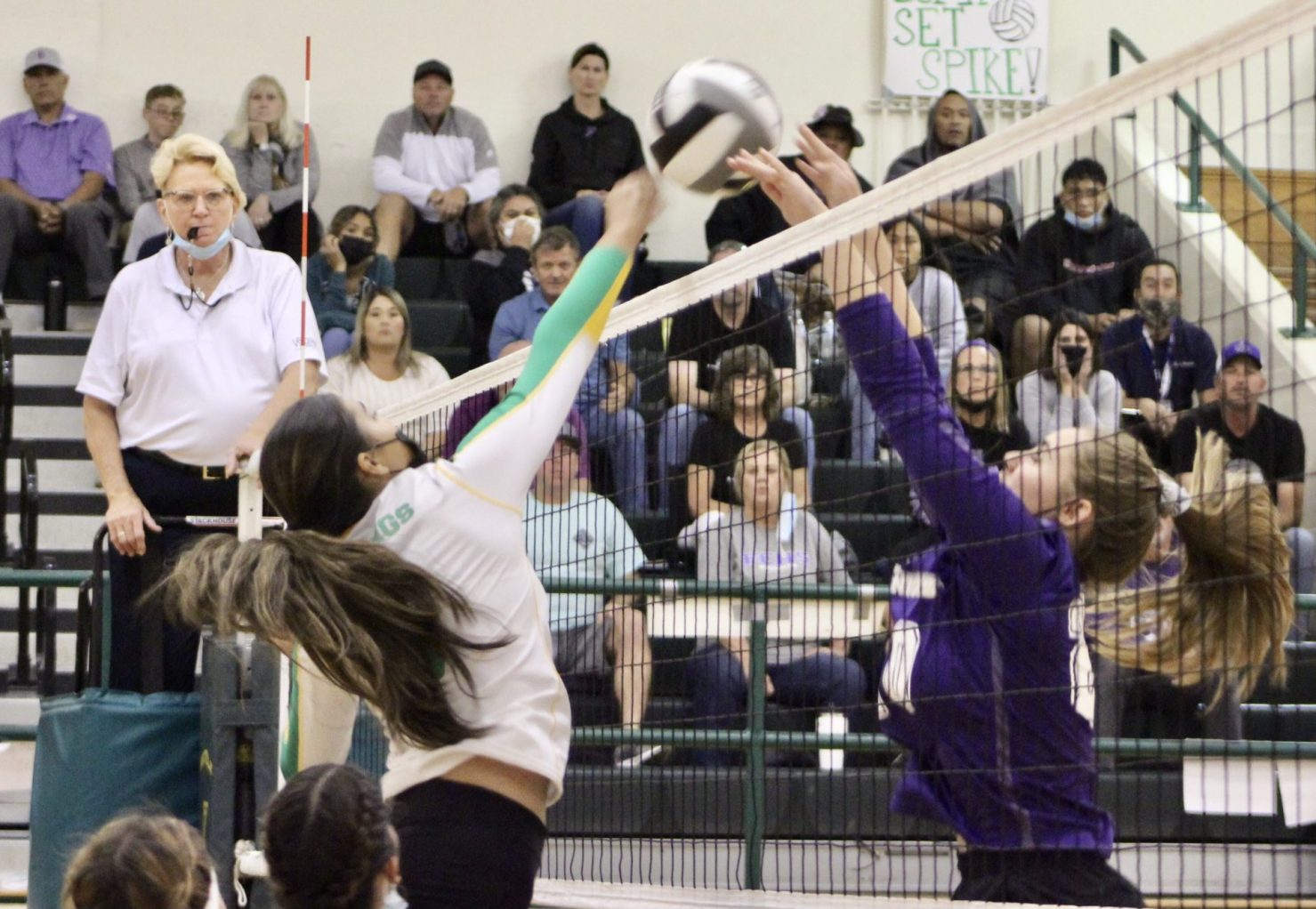 Holtville High sophomore Vanessa Gonzalez tries to win a ball at the net against Foothills Christian High of El Cajon during the CIF-San Diego Section Division IV semifinals in Holtville on Tuesday, Nov. 2. The Knights beat the Vikings, 3-1, to eliminate Holtville from the playoffs. | CATHI PHILLIPS LARIOS PHOTO
Home
Sports
In Sports

HOLTVILLE — The season came to an end one match short of the championship as the Holtville High School volleyball team lost in the CIF-San Diego Section Division IV semifinals, 3-1, to Foothills Christian of El Cajon here on Tuesday, Nov. 2.

“They had some dominant players that kept us back on our heels,” said Chelsey Strahm, Holtville’s fifth-year head coach. “We didn’t put the pressure on them like we should have and allowed their key players to take control of the game.”

Holtville was the top seed in the Division IV playoffs after a perfect (8-0) Imperial Valley League season.

Foothills Christian was the No. 4-seed in the playoffs and moves on to the championship match against second-seeded Santana of Santee. The title match is set for 7 p.m. on Friday, Nov. 5, at Canyon Crest Academy in San Diego.

“We came in to the season knowing our first goal was to win league and we got that done with an undefeated record,” Strahm said. “We just came up short here in CIF.”

The Vikings were trying to repeat as Division IV champions after claiming the title in 2019. There was no volleyball played in 2020 due to COVID.

Vikings’ sophomore Jasmine Garewal had 21 kills to lead the offense against the Knights, with senior Orian Anderson adding seven. Junior Kamryn Walker had 18 digs and six blocks to lead the defense while Kalli Strahm had 15 digs in the back row.

Against Hilltop, junior Hope Jesse led the offense with 10 kills, followed by Walker with eight kills, Garewal with seven and Anderson with five.

Defensively, the Vikings got 13 digs in the back row from Anderson, followed by Walker and sophomore Brooke Strahm with 12 each. Junior Sofie Irungaray had 25 assists from her setter position.

(This story was updated at 11 a.m. Wednesday, Nov. 3, with corrected stats on players.)