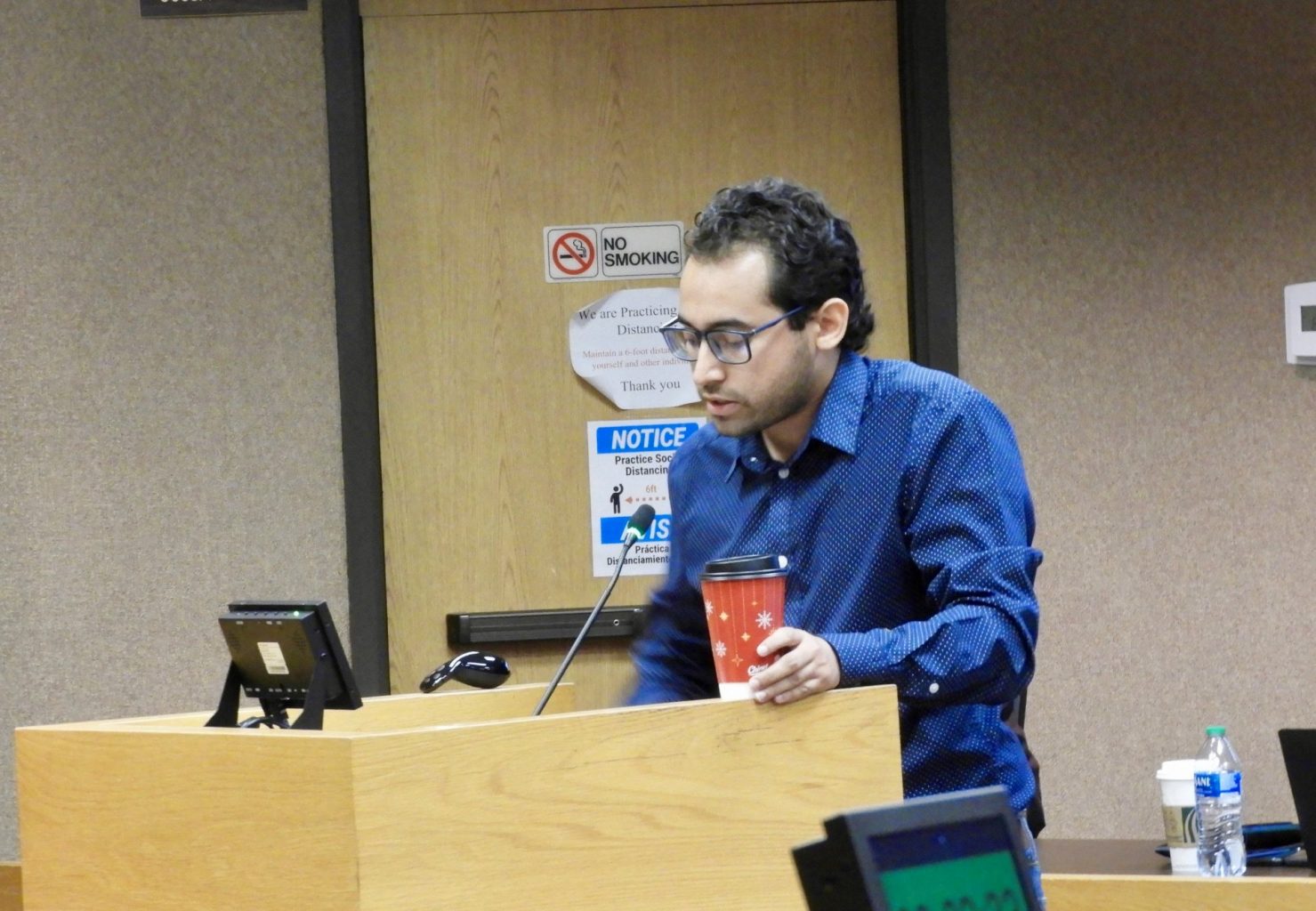 Calexico City Council member Raul Ureña, who said he was speaking as a citizen and not a representative of his city, accuses Imperial County Supervisor Ray Castillo of talking about his sexuality and gender identity behind his back while addressing the board during public comments on Tuesday, Nov. 2. | MARCIE LANDEROS PHOTO
Home
Regional News
In Regional News

EL CENTRO — It’s as if the substance of Calexico City Council member Raul Ureña’s wide-ranging comments to the Imperial County Board of Supervisors became an afterthought once he called out a supervisor for reportedly speaking ill of his sexuality and gender identity.

Ureña’s accusations against District 5 Supervisor Ray Castillo put the board on the defensive and could next lead to changes in public comment policy at future meetings.

“An impugnment of someone’s character, that is not allowed. And that should be on our direction in public comment that if somebody is doing that, they’d be immediately taken out and stopped from being able to speak,” said District 4 Supervisor Ryan Kelley several hours later, at the end of the Board of Supervisors’ regular meeting on Tuesday, Nov. 2.

More specifically, Kelley asked that county counsel come back to the board with options of how that can be made into policy, to readdress the county rules for public comment containing defamatory remarks.

During an eight-minute public comment period that ranged from his criticism of the county lifting of the indoor mask mandate to citizens’ access through Spanish-language translation to comments on a pending landfill decision by the board, it was the Calexico policymaker’s attacks on Castillo that mostly drowned out all other discourse.

Ureña began his comment by establishing that he spoke for himself and not on behalf of the city of Calexico, before referring to Imperial County as “shameful,” demanding that the county begin to provide translation services for county public meetings.

Ureña further expressed his frustrations over a lack of engagement with Spanish-speaking communities, reminding the supervisors that they all served “Brown districts,” before losing his temper over the county’s choice to remove the mask mandate.

“And after what you did with the mask mandate where you said that Brown lives don’t matter, y te hablo a ti señor Castillo y te hablo a ti especificamente (and I’m talking to you, Mr. Castillo. specifically), because you have the time and the audacity to talk behind my back, about my sexuality, about my gender identity,” said Ureña, immediately causing a stir among board and the public listening.

While Ureña’s comments about the mask mandate were also accusatory, it was the accusation that Castillo spoke poorly of Ureña’s sexuality that had the supervisors upset.

“No lo dices en publico pero bien que lo escucho (You don’t say it in public, but I hear anyway),” said Ureña in response to Castillo assertion of his innocence after Ureña took a brief pause for to regain his composure.

Ureña does identify as openly gay, and on some of his social media pages he states
“any” pronoun usage is acceptable in referring to him.

“Stand with your raza. I know you want to run for reelection, but right now we are not happy with you. You voted against our lives. Not only was this such an ill-informed position, you’ve also made this decision at the time when Mexicali is the No. 1, most COVID-infected city in the nation of Mexico, our biggest trading partner, the partner with which half of this county has not stopped seeing prostitutes on the other side, including all of your friends,” Ureña said.

“What are we thinking? You let a couple of white people come here to scare you specifically, Mr. Castillo, I’m very disappointed,” clearly referring to those who gathered for several meetings to protest mask mandates, many of whom were from Holtville, which is in Castillo’s district.

The reality is, there were numerous Hispanics who were among the group that assembled to protest.

Throughout the pandemic, Ureña has been outspoken at various times about the Hispanic population the most impacted by COVID, and clearly Calexico, as one of the hardest-hit cities in the Valley, has responded favorably to vaccination and has seemed to be supportive of masking mandates.

Some of that is backed by data. The U.S. Center of Disease Control and Prevention reports that Hispanics have been disproportionately affected by COVID, with people who identify as Hispanic comprising of 26.1 percent of total COVID cases despite only being 18.5 percent of the population, according to the U.S. Census. At 26.1 percent, Hispanic communities are the most impacted minority, with African Americans coming in second at 11.8 percent.

The county board voted 3-2 on Oct. 26 to end the indoor mask mandate earlier than recommended by the Imperial County Public Health Department and modify the county health order requiring them.

District 1 Supervisor Jesus Eduardo Escobar, whose district includes Calexico, seemed frustrated by both sides of the debate, addressing both in his report to the board.

“It’s black and white. The numbers are going up whether we have treatments that we accept or we don’t accept, we can argue all day about it. And I respect the position of each and every one in this room and in the county. At the end of the day, I need to protect 180 (thousand) plus that live in this county, and that’s why it’s so important that we look at not just the minority, but the entire group,” he said on Tuesday.

“We also need to focus on one thing: all we did is expedite the lifting of an indoor mask mandate. That’s all we did. We basically gave it three weeks,” Escobar explained. “The proposition was Nov. 22, if I remember correctly, and we pulled it back to Nov. 1; that’s all we did. I wouldn’t guess it, but that’s what we approved.”

Near the end of the meeting, Castillo expressed support for Ureña’s initial request of providing more interpretation for members of the Spanish-speaking-only community, though on a much smaller scale than Ureña would like.

“I think Ureña brought up a good point and I would like to look into providing interpterion services, maybe not on a big scale, but maybe some of those earphones where an interpreter speaks into them and translates from English to Spanish,” he said.

Castillo also stated that he took Ureña’s accusations very seriously, recognizing that Imperial County has a large LGBT community and stating that someone making such accusations against him publicly was “not good.”

In a followup conversation with the Calexico Chronicle, Ureña said he did not think his wide-ranging criticism of the county board affects his position as a Calexico council member.

To that end, he reminded that he has been openly critical of the county before, especially early in the pandemic regarding the county Public Health Department’s handling of testing and vaccine rollouts.

“Obviously I had my beef with Janette (Angulo, Public Health director), but it was over policy. It was over how she’s doing her job, the functions of her job. And it was it was kind of harsh, but it was professional and had substance, whereas from what I heard, that group of people that bullied them into making a wrong decision was just completely rude, disrespectful, and honestly, it was such a stupid decision with Mexicali having the highest COVID rate in all of Mexico and with us just about to open the border,” he said late Tuesday.

Regarding Castillo’s supposed remarks on his sexuality, Ureña declined to go into detail on how it got back to him.

“But obviously, when someone offends me, it does come back to me,” he said.

That the county board now wants to change policy stemming from Ureña’s comments doesn’t faze him.

“They can go ahead as long as the rules are applied equally,” he said. “I am not necessarily opposed. This episode has had a lot of strong feelings that were expressed.”

Next
VOLLEYBALL: Vikings Fall in Semifinals