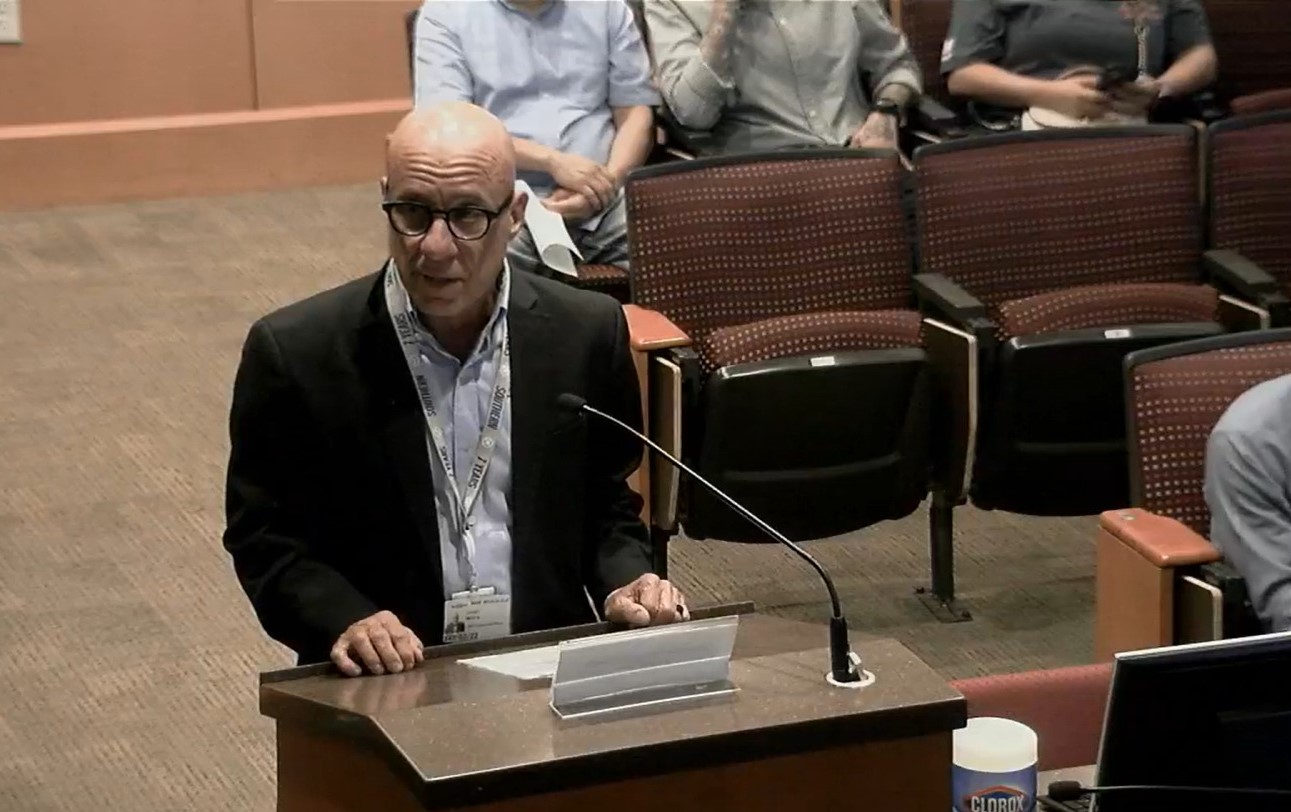 Mark Cestari, Southern Airways chief commercial officer, speaks to the El Centro City Council during its meeting on Tuesday, Nov. 2. His company and another air service provider were seeking a letter of support for their bids to be the county’s essential service provider from the federal government. | VIDEO CAPTURE
Home
Regional News
Share

EL CENTRO — Airline representatives looking to snag a letter of support from the city of El Centro for their competing bids to provide the county with essential air services were temporarily grounded.

Both companies left the El Centro City Council meeting empty handed on Tuesday night, Nov. 2., with the council instead voting unanimously to provide the U.S. Department of Transportation with a letter listing what it viewed to be the pros and cons associated with each company’s bid.

The decision to provide the Department of Transportation with the letter containing the advantages and disadvantages of each came at the suggestion of City Manager Marcela Piedra.

Sensing that council members were not in agreement with one bid over the other, she told the council that a letter containing the two bids’ good and bad points would nonetheless fulfill the DoT’s request for community feedback in advance of the department’s selection of an essential air service provider for Imperial County.

“I believe that would be greatly appreciated by the agency,” Piedra told the council.

As part of its vote, the council also selected to have Mayor Cheryl Viegas-Walker work with city staff to draft its letter to DoT.

During the meeting, Viegas-Walker made it clear that she was disappointed with the customer service provided by Southern Airways Express, which currently provides the county with airline service under a contract that is set to expire in April 2022.

Much of her criticism was based on a recent flight and prompted some back-and-forth between her and Mark Cestari, Southern Airways chief commercial officer, who appeared before the council to share the company’s EAS proposal.

One of those critiques included Southern Airways’ current lack of a mobile app that would allow passengers to check into their flights and avoid having to get their boarding pass at the airline’s ticket counter. Cestari responded that such an app should be available by the end of the year.

He also acknowledged that the company’s attempt to always have a spare aircraft available when needed remained “fluid,” and changes by the day.

“I’m not suggesting we are perfect, but I think we are doing a pretty good job for your city,” Cestari said.

Though maybe not perfect, Cestari also disclosed that the airline boasted an on-time performance rate of 94.1 percent.

In response, Cestari told him that pets are allowed on a limited case-by-case basis, passengers can avoid paying added baggage fees by paying a slightly higher fare, and that the company has plans to ramp up its bilingual meeting efforts, especially since its bid proposes adding a daily flight to Las Vegas McCarran International Airport.

Having the option to fly to Las Vegas from El Centro was an enticing opportunity, said council member Edgard Garcia.

“To have that as a viable commercial route I think a lot of people would take advantage of that,” he said.

Yet, Garcia expressed reservations about issuing a letter of support to Southern Airways outright, considering the issues that were brought up by his colleagues.

By adding the flight to Las Vegas, Southern Airways would reduce its daily flights to Los Angeles from four to three, Cestari said. The proposal to add a flight to Las Vegas was prompted by an untapped market demand both in the Valley and in Mexicali, he said.

The potential loss of a daily flight to the Los Angeles International Airport was concerning to council member Martha Cardenas-Singh, who said local data suggests those flights are a big draw for locals.

DoT is requesting community feedback by Nov. 10 to help it select a new carrier for the term beginning May 1. The Essential Air Service program is administered by DoT to guarantee that small communities like the Valley are served by certificated air carriers that can maintain a minimal level of scheduled air service. As part of the program, the DoT helps subsidize EAS providers.

If it’s bid to provide local air services was to be approved by the Department of Transportation, Boutique Air would provide daily flights to both LAX and Phoenix for at least eight and up to nine passengers, which is the number of passengers Southern Airways’ aircraft can accommodate.

Boutique Air’s flights to LAX would also take about 50 minutes, quicker than the hour and 20 minutes passengers currently experience with Southern Airways, Brian Kondrad, Boutique Air vice president, told the council during his presentation at the Nov. 2 meeting.

It plans to deploy pressurized Pilatus PC12 aircraft, which can travel at a higher elevation if needed, allowing it to reach its destinations more rapidly, Kondrad said.

The cost of a one-way flight to LAX would fall within $29, up to $69, based on its fares in a similar market, he said. Additionally, its passengers would not have to pay any baggage fees and would have access to complementary snacks and a restroom while in flight.

It currently deploys a mobile app that can allow passengers to check-in to their flights without the need to use a ticket counter, alert passengers to any flight delays, and has extensive phone and online customer service options available around the clock to assist passengers with a variety of needs, Kondrad said.

Despite the appealing aspects of Boutique Air’s proposal, the council was hesitant to draft a letter of support in its favor, considering it did not have any tangible results to work with.

Boutique’s bid to provide services for the duration of the four-year term ranged between $3.5 million to $3.8 million on an annual basis, while that annual figure was about $2.7 million to $2.9 million for Southern Airways, according to their respective proposals.

Southern Airways’ proven performance record, low airfare, and proposal to add Las Vegas as a destination point was sufficient to earn its bid the unanimous support of the Imperial County Board of Supervisors.

Its airfare typically ranges from about $80 to $100 for a one-way flight, said Rebecca Terrazas-Baxter, Imperial County intergovernmental relations director.

Since its acquisition of Mokulele Airlines a few years back, Southern Airways has also operated in a transparent manner, Terrazas-Baxter said.

“We’ve just had a wonderful working environment,” she said.

The county sent its letter of support to the DoT on Oct. 22.

“Southern Airways is committed to this community, they have added an additional interline partner, with United Airlines, just in the past few months, and their reliability has been dynamic,” the letter stated.

Previous
Young Children Can Receive COVID Vaccines. Here’s What You Need to Know