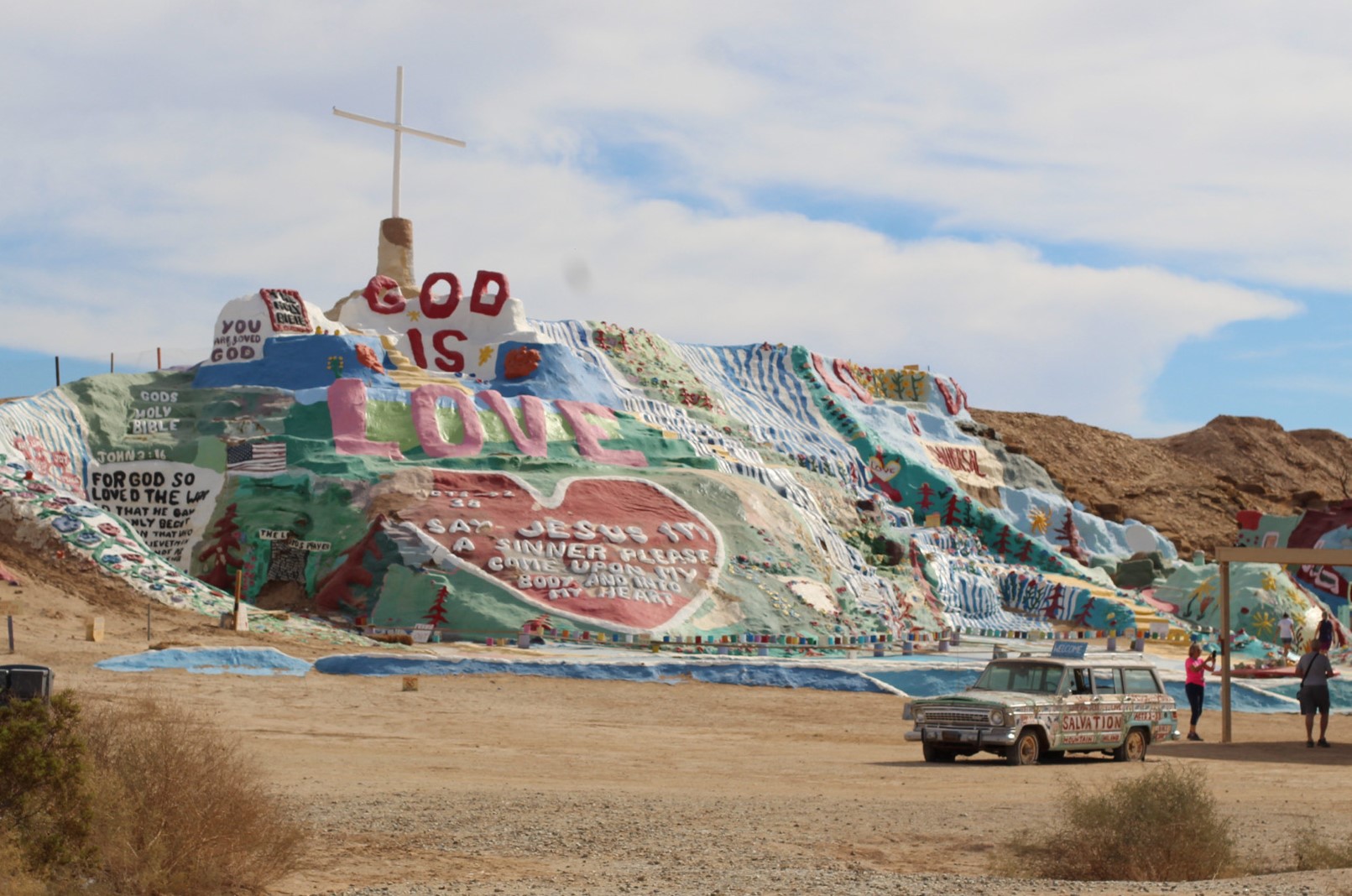 Tourists (lower right corner) can be seen taking photos of the late Leonard Knight’s Salvation Mountain outside Niland on Monday, Nov. 1. Salvation Mountain Inc. is looking to negotiate with the state Land Commission to purchase the land around the manmade folk-art piece in an attempt to get it designated as a National Landmark. | MEGAN JONES PHOTO
Home
Featured Stories
Share

Salvation Mountain Inc. will begin the process of purchasing the land surrounding the popular folk-art creation of the late Leonard Knight, whose universal symbol of love and faith is an indelible image that has graced everything from postcards to music videos.

“We’ve been offered the opportunity for many years now, five or six years, by the state to purchase the property here around Salvation Mountain. And we put it off for quite a little while for a number of reasons, but we decided that now is a good time to do it,” said Bob Levesque, president of Salvation Mountain Inc., during an interview on Monday, Nov. 1.

“And we want to make sure that we have the consent of the Board of Supervisors before we bring an agreement to the (State of California Land Commission),” Levesque said.

The land on which Salvation Mountain sits is owned the Land Commission, but it is the intent of the group of dreamers to develop a landmark, to which the county board lent its support on Tuesday, Nov. 2. The board unanimously passed a resolution endorsing the purchase.

Salvation Mountain Inc. wanted to make sure before purchasing the land around the Salvation Mountain, which sit outside Niland, that the county would support the effort to possibly develop the site into a National Landmark, guaranteeing its continued protection, Levesque said.

“We’ve been stung so many times, it’s nice to get to foster something that is home grown,” District 1 Supervisor Jesus Escobar said, before verifying from county counsel that there would be no impact, legal or financial, for the county in supporting this purchase.

Levesque also assured the board that Salvation Mountain Inc. only ask that the county be willing to support the group through things like zoning laws as they develop the area into a landmark after the purchase.

District 5 Supervisor Ray Castillo expressed his fond memories of Leonard Knight, the artist who created Salvation Mountain, and his dedication not only to the mountain, but also to the communities within Imperial County.

“I visited Salvation Mountain when (Leonard Knight) was still alive. He had love in his heart for everyone. He left us a tremendous legacy and I’d like to see it continue for as long as it can,” Castillo said after Levesque’s presentation.

Knight began his work in 1984 to create the 50-foot-tall folk-art installation that would spread his message, “God is Love,” using donated paint and locally made adobe. The original mountain collapsed in 1989, but that didn’t stop Knight, who declared, “Now God, you build it.” He continued to work on the mountain until 2011 when he was placed in the El Dorado Care Facility in San Diego, where he died on Feb. 10, 2014.

Over the years, Knight and Salvation Mountain became a fascinating subject for documentarians and other photographers and filmmakers. Twice featured 10 years apart on Huell Howser’s “California’s Gold” (search the archives), the mountain was a popular backdrop for feature films and music videos, one of the most recent and high profile being Coldplay’s video for its 2016 single, “Birds.”

No purchase price has been thrown around, Levesque said, as the negotiations have yet to begin.

Initially the state Land Commission offered Salvation Mountain Inc. some 440 square acres of land that surrounds Salvation Mountain and extends into the area known as Slab City, a community of people who choose to live off grid on a set of cement slabs outside of Niland.

A Suspected Calexico Arsonist is in Custody; No Suspicious Fires Since

The land these cement slabs sit on used to be a military base during World War II, but after it was decommissioned, the land was given to the state. California decided to place the land in trust with the commission on behalf of the Retired Teachers Association, so it could eventually be sold, and the profits could go to support pensions for California’s retired teachers.

“They made contact with us first because most of the other people who live in the Slabs are off grid, and were almost impossible to reach, which for their part was on purpose. So, Salvation Mountain, we’re reachable and they reached out to us,” Levesque said. “They actually offered to sell us the whole thing, 440-acre square that encompasses the old military base, the central part of it, where all the slabs are, which is what’s called Slab City, and it extends out into some of the areas around it.”

Ammon also serves as the vice president for Salvation Mountain Inc., and Levesque promised the board they would hear from Ammon over the Slab City Community Group’s plan for the portion of land that they would like to negotiate to purchase.

Ammon, whose been a fixture at Slab City for years and is known for his regular gigs performing music on that community’s The Range stage, could not be reached on Nov. 1. He also did not speak at the county meeting, sitting in the audience and slipping out before a break in the meeting.

Next
Debate Over Psych Beds in Imperial County Continues