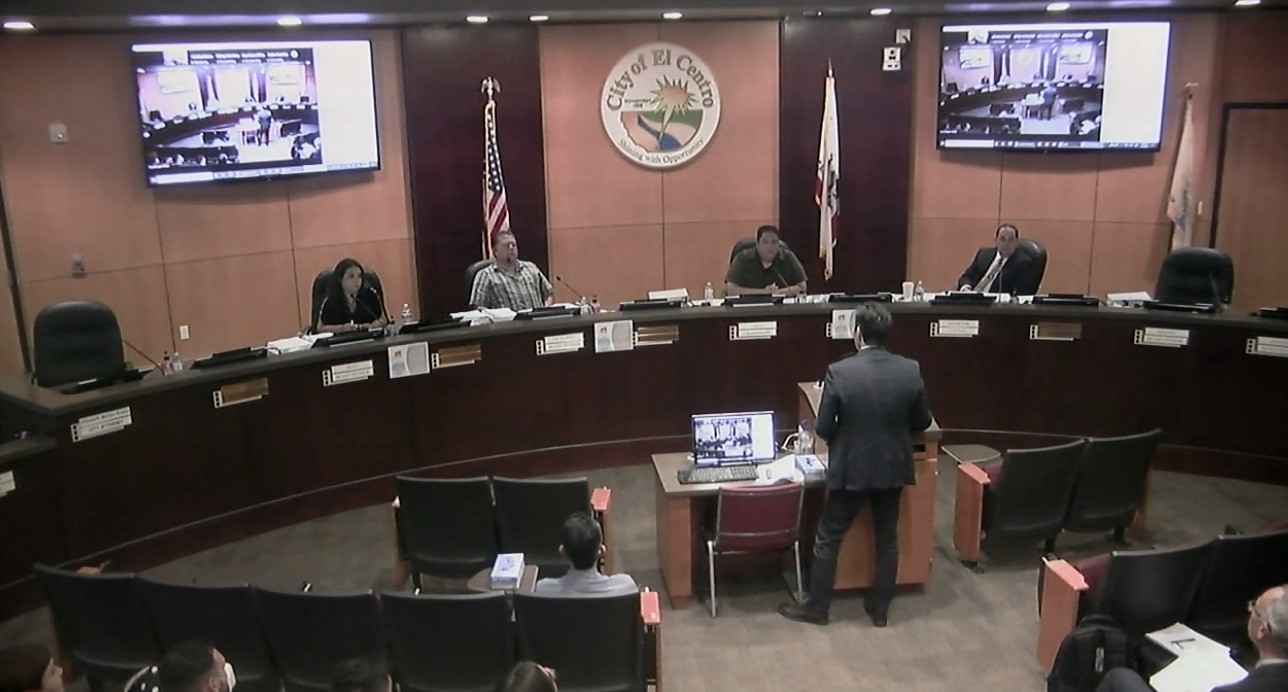 EL CENTRO — Barring any lawsuits, the city of El Centro’s two finalists for its commercial cannabis business permits are free to move forward with their respective proposals following a public hearing that concluded with the rejection of two other permit applicants’ appeals of their lower rankings.

The two finalists had potentially faced the prospect of having their respective standings adjusted had the city’s Board of Appeals approved the two lower-ranking applicants’ appeals to have their and the finalists’ evaluation scores reconsidered by city staff.

Instead, the Board of Appeals determined during a lengthy public hearing convened Thursday, Nov. 4 at City Hall that the evaluation and scoring of the two lower-ranking applicants’ written applications and in-person interviews complied with the guidelines spelled out in city’s cannabis ordinance.

The two appellants, Leef El Centro Retail and El Centro Greens, are to be provided a written copy of the board’s decision within the next two weeks, after which time they have 90 days to potentially contest the decision by filing a Superior Court lawsuit, El Centro City Attorney Elizabeth Martyn said on Friday, Nov. 5.

“We hope there will not be such an action,” Martyn said.

In the absence of any lawsuits, the two finalists, Authentic El Centro and Megan’s Organic Market, can proceed with the next phase of their respective business plans, which would be to acquire their building sites and getting land use approval so they can open, Martyn said.

Authentic El Centro, which earned the city’s highest scoring, has proposed to occupy the 12,000-square-foot standalone building at 3009 S. Dogwood Road that formerly housed Party City. It plans to hire some 40 to 45 employees.

The company operates about 20 retails stores throughout the state, as well as a lesser number of cultivation, manufacturing and distribution sites.

The more than $33 million it paid in cannabis taxes in 2020 reportedly makes it the largest cannabis taxpayer in the state. Its retail stores average about $18 million in revenue, according to a presentation it provided the city as part of its evaluation.

Megan’s Organic Market (MOM’s) of San Luis Obispo is looking to operate out of 599 N. La Brucherie Road in an existing building that would require major revitalization. It also operates a retail storefront and two cultivation sites in San Luis Obispo County.

It has committed itself to hiring 100 percent of its staff from Imperial County, with most of those employees being El Centro residents. It also boasts the tagline of “Making Cannabis Wholesome.”

The two finalists were among eight applicants whose proposals were reviewed and scored by a committee consisting of city employees. Applicants also took part in subsequent in-person interviews that were scored, as well.

The issue of scoring played large in the appeals filed by Leef El Centro and El Centro Greens, which is an offshoot of March & Ash, which has operated a dispensary in Imperial since the fall of 2019.

Following the testimony of both companies’ representatives during their respective public hearings, as well as rebuttals by representatives of the city, the Board of Appeals found the companies’ appeals did not prove that the city’s evaluations and scoring were improper.

Additionally, the appellants’ arguments that Authentic El Centro’s overall score should be revised based on the recent disclosure that its former chief executive officer, Brian Mitchell, was indicted on fraud-related charges also failed to gain traction with the appellate board.

Representatives of Authentic El Centro that were present for the appeal hearings clarified that the charges were related to alleged activities dating to 2016 and that Mitchell had joined Authentic in 2019. He resigned in September, a month after Authentic got word that it was a finalist, said Tak Sato, president of Shryne Group Inc., which owns the Authentic brand.

“We just received a legal opinion that showed that Brian’s activities (with Authentic) had no relation to the activities that he was indicted for,” Sato said.

The appellate board was established as part of the city’s commercial cannabis ordinance to hear such appeals by applicants. The board consisted of five members of the community selected by the City Council.

At one point, board Chair Dax Chell motioned to approve El Centro Greens’ appeal based on his finding that there was no clear scoring system that could explain how points were assigned for different components of the application and interview process.

“Without documentation there is no transparency and that in a sense is where I’m coming from,” Chell said.

Fellow board member Param Maroke seconded the motion, but it failed to be approved after board members Oscar Escalante and Myra Soto voted against it.

City Attorney Martyn reminded the board that its purview was solely to determine whether the city failed to follow the evaluation guidelines established by the city’s cannabis ordinance or state law.

Even had the appeal been approved and El Centro Green’s application sent back for re-evaluation, it would be scored the same based on the established scoring criteria.

El Centro City Manager Marcela Piedra, who was also on hand to offer rebuttal on behalf of the city, explained that the city’s scoring criteria was reflective of those that many municipalities use to evaluate development projects. Such scoring criteria typically assign a maximum number of points within a given category but do not break down those scores based on smaller subcategories.

“That level of detail is not done with those types of reviews,” Piedra said.

With that further clarification, the board subsequently motioned to deny El Centro Green’s appeal.

Martyn said that based on March & Ash’s business relationships and willingness to collaborate with the finalists, she does not think it will sue the city to contest the appeal’s denial.

Martyn expressed less certainty regarding Leef El Centro’s position but indicated that if its lawsuit in anyway reflected its in-person presentation to the city during the interview process, it wouldn’t likely prevail in court.

During Leef El Centro’s appellate hearing, city officials disclosed that its representatives did poorly during the in-person interview, which accounted for its lower score.