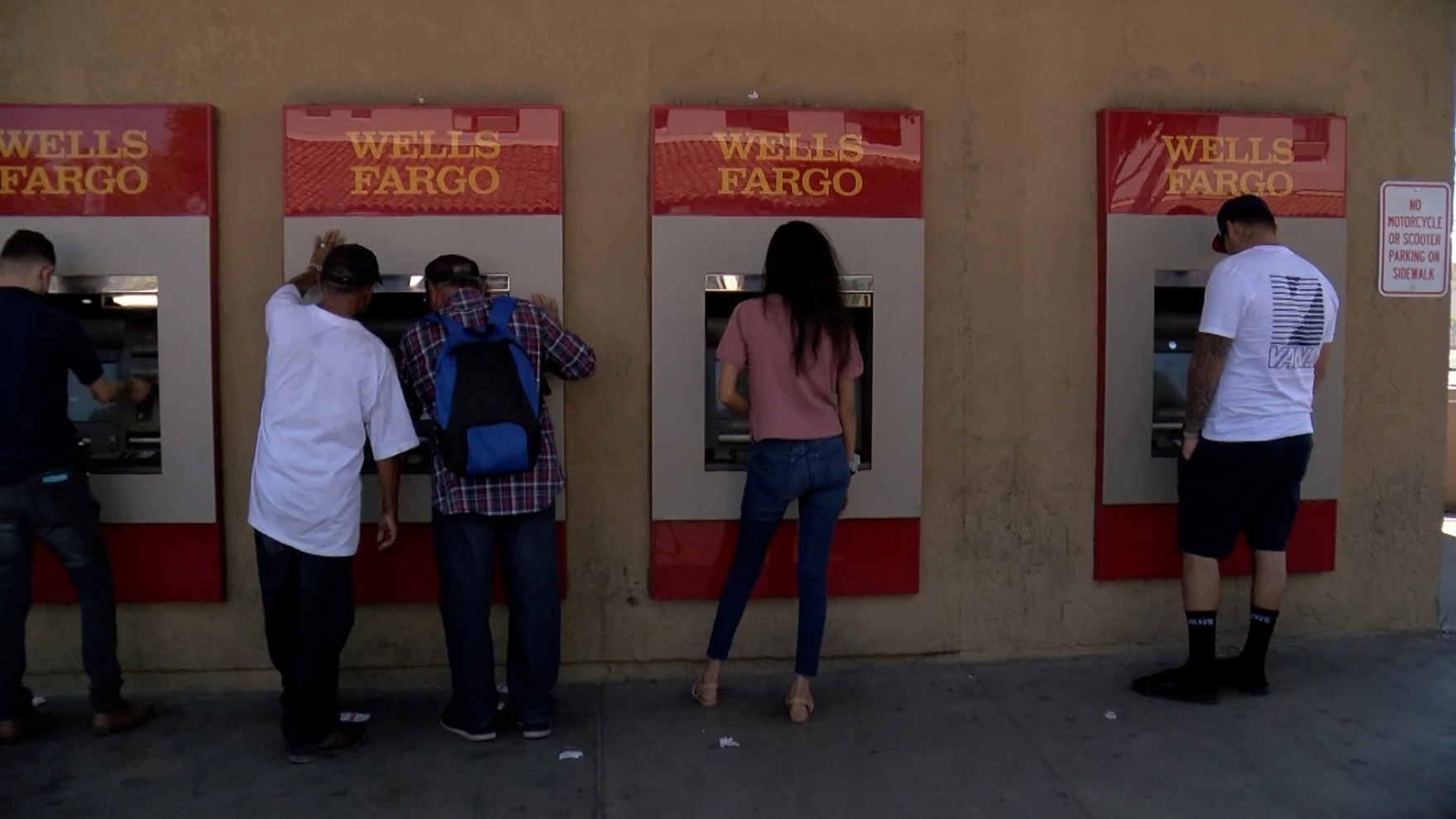 IMPERIAL COUNTY — Noon is still hours away on a Tuesday in early August, but the streets of El Centro are so hot it feels like the soles of your shoes could melt into the asphalt.

When the clock strikes 8 a.m., the temperature is already pushing past 100 degrees.

Suffering in this heat are lines of people outside Bank of America and Wells Fargo branches. Beads of sweat form on the faces of customers as they wait patiently to use the ATM or talk to a teller.

Among them is Juan Siqueria, an agricultural worker from Holtville. He drove over 30 minutes to get to Imperial County’s only Bank of America branch and then waited an hour just to use the ATM.

Now during the high heat season it’s unbearable to stand in line waiting for the ATM because there’s not even shade to ward off the heat.”

“Now during the high heat season it’s unbearable to stand in line waiting for the ATM because there’s not even shade to ward off the heat,” Siqueria said in Spanish.

El Centro is in Imperial County, situated on the edge of the Anza-Borrego Desert State Park. But the region is at risk of becoming another type of desert — a banking desert.

The largely rural county is one of California’s poorest and home to about 180,000 predominantly Latino residents. Currently, there are only 12 brick-and-mortar Federal Deposit Insurance Corporation (FDIC) insured banks in the county, or one bank per approximately 15,000 people. As recently as 2013, the county had 19 bank branches.

El Centro is the region’s banking center with eight brick-and-mortar branches that serve its over 40,000 residents, plus others from around the county. In comparison, Solana Beach, an affluent city on the coast in San Diego County, has eight branches serving a population of 13,000.

It’s a common sight to see lines that can take up to three hours outside of Imperial County’s bank branches and ATMs. The lines get particularly long during the first week of the month, when people come to cash in their paychecks, social security and disability checks.

The Role of Climate Change

Heat, like long lines, is away of life in this region. But with extreme heat temperatures rising due to climate change, people’s exposure to the heat is becoming increasingly dangerous.

Maria Lopez, a retiree from in El Centro, nearly fainted while she was waiting to go inside Wells Fargo Bank.

“A lady (in the line) told me that I didn’t look good and then they rushed me inside where it was cooler,” she recalled in Spanish. “I can’t be in the heat very long because I get sick.”

The demand is so high during certain days that the Wells Fargo branches in El Centro and Calexico have devised systems so that people have access to shade.

Lopez wishes there were more bank branches so people didn’t have to wait too long or travel to El Centro from around the county to do their banking. She thinks the limited number of branches in the region contributes to the long wait times.

There are a number of reasons why the county has such a shortage of banks. One is the war on drugs.

A large number of banks along the Mexico-U.S. border began to close from 2013 to 2015 due to what bank officials then said was a crackdown on drug-related money laundering policies.

Beth Mills, a spokesperson for the Western Bankers Association, acknowledges that additional reporting requirements during this time could have played a role in branch closures.

But changes in consumer habits also play a major role, she said.

I think we have seen a fair amount of branch consolidation in the past several years, just given the preferences for how people bank have changed.”

“I think we have seen a fair amount of branch consolidation in the past several years, just given the preferences for how people bank have changed,” Mills said. “There’s been a lot less people going into branches now, with everyone doing mobile banking.”

Juan Lopez, a regional spokesperson for Wells Fargo, also says he’s seen an increased use in online and mobile banking.

“Everyday banking is going to be and is completely digitized now,” he said. “I personally would guesstimate that the teller line will eventually, probably, go the way of the dinosaur over the next 10 years.”

According to a 2019 survey by the FDIC, which regulates banks, more and more people across all demographics are using mobile banking. However, the same study showed that in-person banking is still popular in rural areas. More than 87% of rural households visited a bank branch once in 2019, and more than half visited a branch 10 or more times, the study showed.

These numbers make sense to Jaysel Mendoza, the Director of the Imperial Valley Small Business Development Center. As a native of Imperial County who works with small businesses in the area, she sees first hand the important role brick and mortar branches play in Imperial county.

“The culture here is very different,” she said. “I can honestly say that most business owners want to sit down and sit in front of a person and know who they are conducting business with.”

She said the lack of branches can be a challenge for small business owners she works with who are looking to build relationships with banks. Such relationships are absolutely vital for the economic health of a community, according to some studies.

A 2018 study by the University of Delaware found that branch closures lead to a 20% drop in small business loans. And a relationship with a lender, such as a bank, was a crucial lifeline to applying and receiving Paycheck Protection Program (PPP) loans during the height of the pandemic.

Beyond the needs of small businesses, Mendoza believes bank branches also help with language barriers that can be especially daunting when dealing with financial matters.

“I worked at a bank, I remember I would have individuals come in who didn’t speak English and they would come in and say, ‘I got this letter’ and it wasn’t even related to the bank,” she recalled. “And I would say OK, let me help you.”

Bank branches in the area are in this way providing financial education and serving as community resources. And that’s not a role that Mendoza thinks can be fully replaced by mobile banking or ATMs.

According to Mendoza, the bottom line is the majority of the people lining up at the beginning of the month are older and already used to doing their banking in person.

Maria Lopez, who nearly fainted waiting in line that one time, says she’s not interested in mobile or online banking.

Pointing to KPBS Reporter Cristina Kim’s phone, she said: “I don’t know how to do that, mija.”

Even though she’s learned when to come to avoid the worst of the lines and appreciates Wells Fargo’s organized system, she still wishes there were more banks in the area so people wouldn’t have to stand in line.

Juan Lopez of Well Fargo is based out of Los Angeles. But he grew up in Imperial County and is no stranger to the banking lines.

He’s not certain more bank branches would alleviate the wait times, but does acknowledge that when a lot of branches started to close in Calexico, the lines got longer at Wells Fargo.

“As (Citibank and Bank of America) shutter and leave the community, the lines just got progressively worse because we were the only bank there in Calexico,” Lopez said.

Less than a mile from the Mexico border, Calexico’s sole brick-and-mortar branch is the town’s Wells Fargo. Some days the lines can take a person up to three hours, according to Lopez.

Bank of America’s Calexico branch closed in 2015. In a statement to KPBS, Bank of America spokesperson Colleen Haggerty, said the decision to close was because 80% of transactions were taking place at the ATM.

When the Calexico Bank of America branch closed it left behind a row of ATMs. On that third day in August 2021, a line of people waits to use them. There’s no shade to block the beating sun.

“This issue is not going away,” said California state Sen. Ben Hueso, in a statement to KPBS. “Banking access is a huge problem in the Valley.”

Sen. Hueso noted that he is “grateful to Wells Fargo for rising to meet the challenge” in Calexico, but that there is “still enormous need for banking services.”

He recently co-authored two bills that have paved the way for public banking options at the state and local level and he says banking will continue to be one of his legislative priorities.

For now, however, people are still lining up at Imperial’s few remaining bank branches, no matter what the thermometer reads.

This story, Fewer banks and rising temps are a dangerous mix in Imperial County, is being reprinted by permission of KPBS.

Next
As UN Tackles Twin Climate Threats, California Struggles with Them, Too