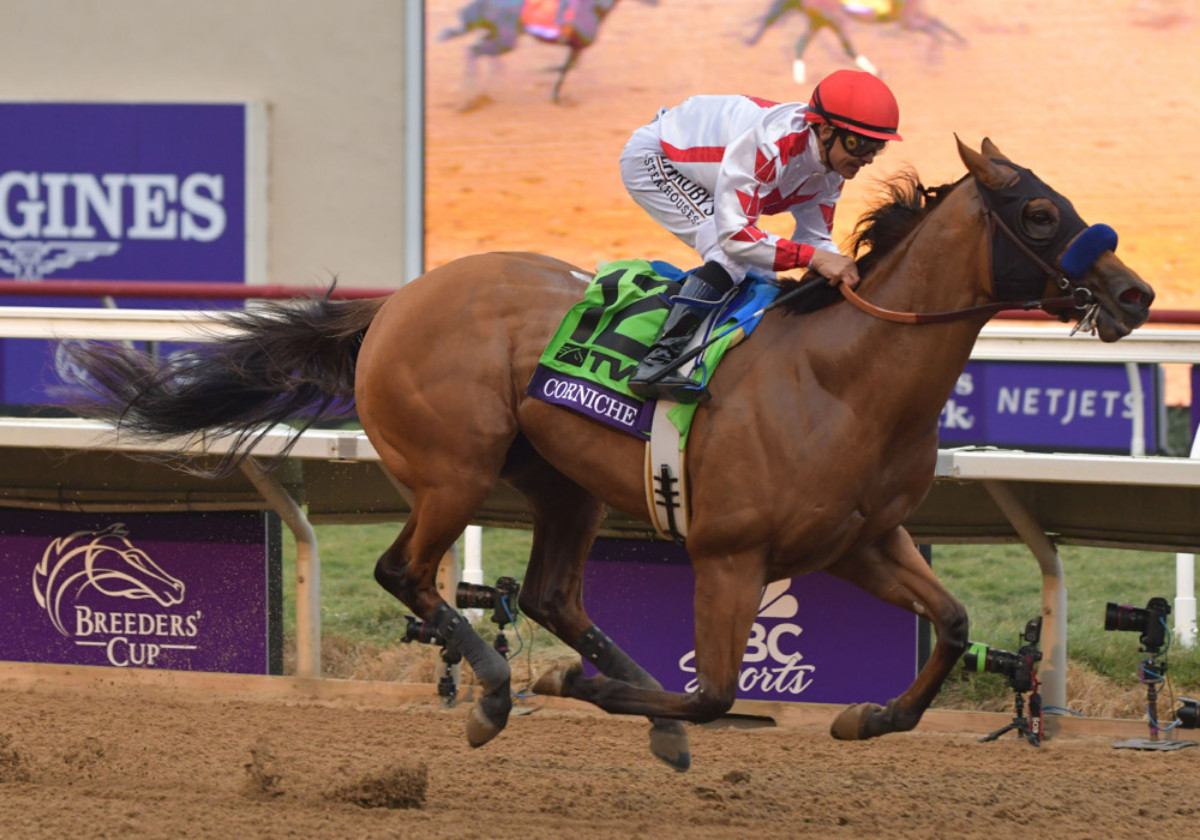 DEL MAR — The 38th Breeders Cup opened Friday, Nov. 5 at Del Mar, with some upsets and a win by a celebrity owner, but a mishap marred the closing race of the day, forcing the favorite to almost miss the run.

Modern Games, initially withdrawn, was reinstated, and won the Breeders’ Cup Juvenile Turf, but the maneuver drew criticism and even boos at the track. As Racing TV reported, U.S. bettors could not wager on the horse after the changes.

The situation, the site reported, stemmed from contact between Modern Games and Albahr, who “fell backwards in the stalls and apparently clipped his stablemate.”

Neither horse was injured, though The Guardian labeled the situation “extraordinary and chaotic.”

Modern Games, running for purse money only, finished ahead of Tiz the Bomb and Mackinnon.

The championships continue Saturday, leading up to the Breeders Cup Classic. In Friday’s other cup races:

Twilight Gleaming led all the way to win the fourth running of the $1 million Breeders’ Cup Turf Sprint for 2-year-olds by a half-length over Go Bears Go to open the 38th Breeders’ Cup World Championships Friday at Del Mar.

It is the fifth Breeders’ Cup victory for Ward and the 12th for Ortiz.

The undefeated Echo Zulu also led out of the gate to post a 5 1/4-length victory over Juju’s Map in the 38th running of the $2 million Breeders’ Cup Juvenile Fillies for 2-year-olds.

Trained by Steve Asmussen and ridden by Joel Rosario, Echo Zulu covered the 1 1/16 miles on a fast main track in 1:42.24.

Echo Zulu has won by a combined margin of 22 lengths. The victory was worth $1 million, increasing her earnings to almost $1.5 million.

“Today she liked what she was doing up there (in the front) and when I asked her, she just took off. She’s just amazing,” Rosario said.

It was an adventure for celebrity chef Bobby Flay’s homebred Pizza Bianca, who surged by the pacesetter, Cachet before holding off a late bid from Malavath to win the 14th running of the $1 million Breeders’ Cup Juvenile Fillies Turf for 2-year-olds.

The victory gave trainer Christophe Clement his first Breeders’ Cup triumph after having 40 other starters in the World Championships.

Back to Campus Under COVID: Students Reflect on Unusual Semester

Jose Ortiz rode Pizza Bianca, who covered the mile on the Jimmy Durante Turf Course in 1:36.08. It is the fourth Breeders’ Cup victory for Ortiz and first in the Juvenile Fillies Turf.

Malavath and Haughty finished second and third, with favorite Koala Princess far off the pace in seventh.

Corniche never trailed, holding off Pappacap by 1 ¾ lengths to win the 38th running of the $2 million Breeders’ Cup Juvenile for 2-year-olds.

Trained by Bob Baffert – who continues to face questions over horses under his care testing positive for drugs, most recently following the Kentucky Derby – ridden by Mike Smith, Corniche covered the 1 1/16 miles on the main track in 1:42.50.

The victory is the fifth in the Juvenile for Baffert and 18th overall. Smith, with the most wins for a rider in World Championships history, logged his 27th victory and third in the Juvenile.

(This report first appeared in the Times of San Diego and is made available as part of the CalMatters Network.)