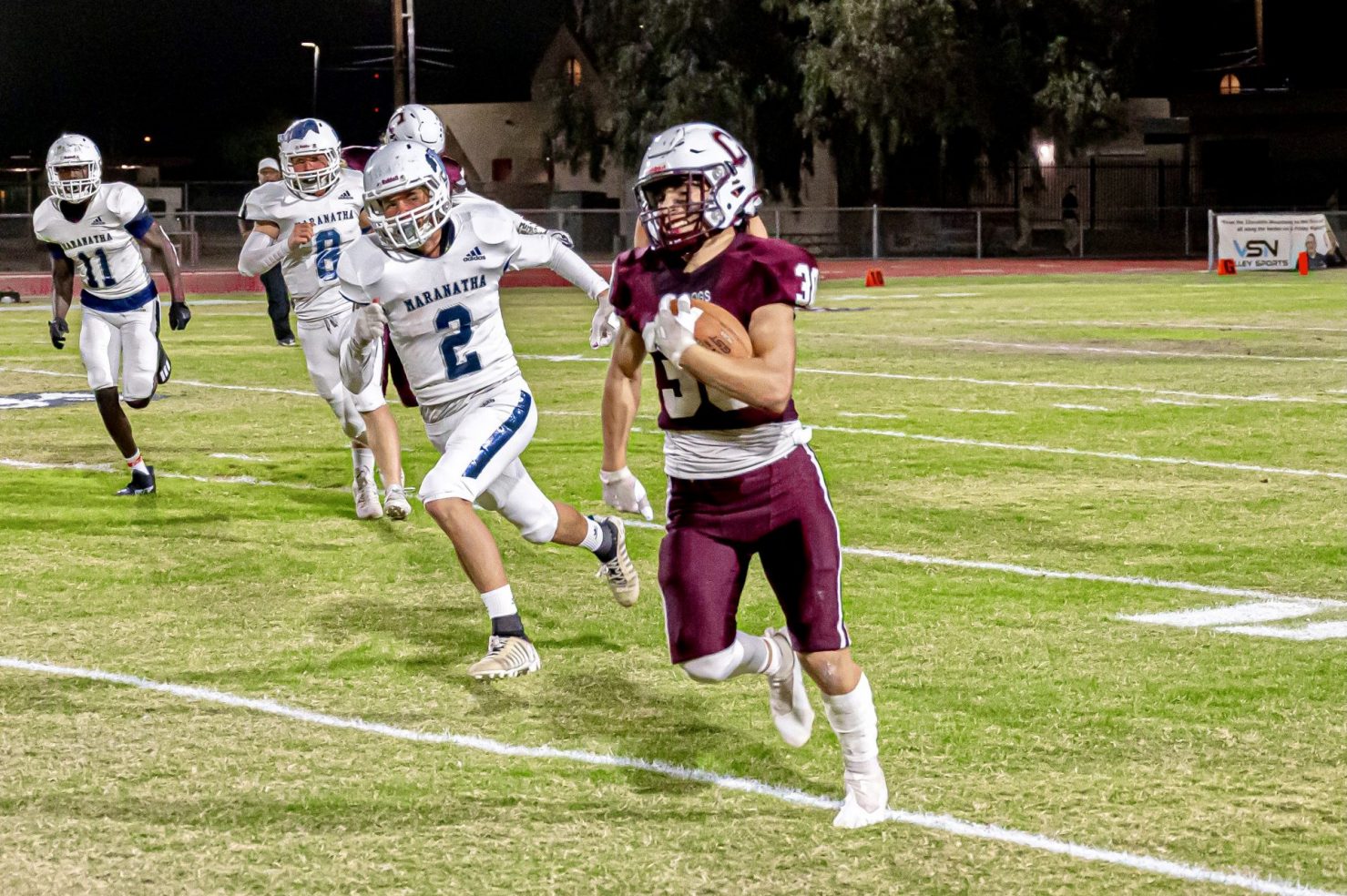 Calexico High junior Zeus Pradis sprints 53 yards for a touchdown on the second play of the game during the Bulldogs’ 34-3 victory over Maranatha Christian High of San Diego in the opening round of the CIF-San Diego Section Division V playoffs at Ward Field in Calexico on Friday, Nov. 5. | CAMILO GARCIA JR. PHOTO
Home
Sports
In Sports

CALEXICO — The Calexico High School football team got its first playoff win in five years when the Bulldogs crushed Maranatha Christian High of San Diego, 34-3, in the first round of the CIF-San Diego Section Division V playoffs at Ward Field here on Friday, Nov. 5.

Calexico (6-5 overall) came into the contest as the sixth-seeded team in the division while the Eagles (3-7 overall) were the No. 11 team.

The Bulldogs had lost three straight playoff games dating back to 2016, which is the last time they got a postseason win, beating Palo Verde Valley High of Blythe 35-6 in a first-round matchup before losing to Tri-City Christian High of Vista in the quarterfinals.

“I challenged our offensive line all week to come out and dominate this game,” said Fernando Solano, Calexico’s second-year head coach. “I thought physically, up front, we had the advantage and we had to establish our running game from the get-go.”

It didn’t take long for that dominance to show as Calexico junior Zeus Pradis scored on a 53-yard touchdown run on the second play from scrimmage. It was a perfectly timed option pitch from senior quarterback Abram Zazueta that freed up Pradis for the score.

After a two-point conversion run from senior Ernie Sanchez, the Bulldogs were up 8-0 just 55 seconds into the game.

“The line opened things up and when I got the ball and saw open field I just ran,” said the 16-year-old Pradis. “Tonight I thought we played quick and we played intelligent.”

The Eagles got their only points with 9:04 left in the first half when sophomore kicker Dylan Pahler booted a 37-yard field goal to make it 20-3.

Calexico then went on a near-seven-minute drive that ended with a one-yard touchdown plunge from Zazueta to close the half up 26-3.

“When the line is opening holes like that, we have good running backs that know what to do,” said the 16-year-old Zazueta. “We were pumped up and ready to go tonight and we didn’t make any big mistakes.”

The Calexico offense put up 445 yards of offense, including 359 on the ground.

The second half had just one explosive play which was a 68-yard touchdown run from Calexico junior David Rivera, who hit a seam up the middle and sprinted past the defense for the score to put the Bulldogs up 34-3 with 17 seconds left in the third quarter.

The victory lifts Calexico into the Division V quarterfinals where the Bulldogs will meet third-seeded Holtville at 7 p.m. on Friday, Nov. 12, at Birger Field in Holtville.

“Physically we are ready, but mentally we have to be locked in and ready to go,” Zazueta said about facing the Vikings. “We have to stop their running game and watch for the tight-end pass.”

“Defensively we have to make sure we get off the field on third and fourth downs (against Holtville)” Solano said. “We need to control the clock, pick up first downs and don’t make mistakes.”