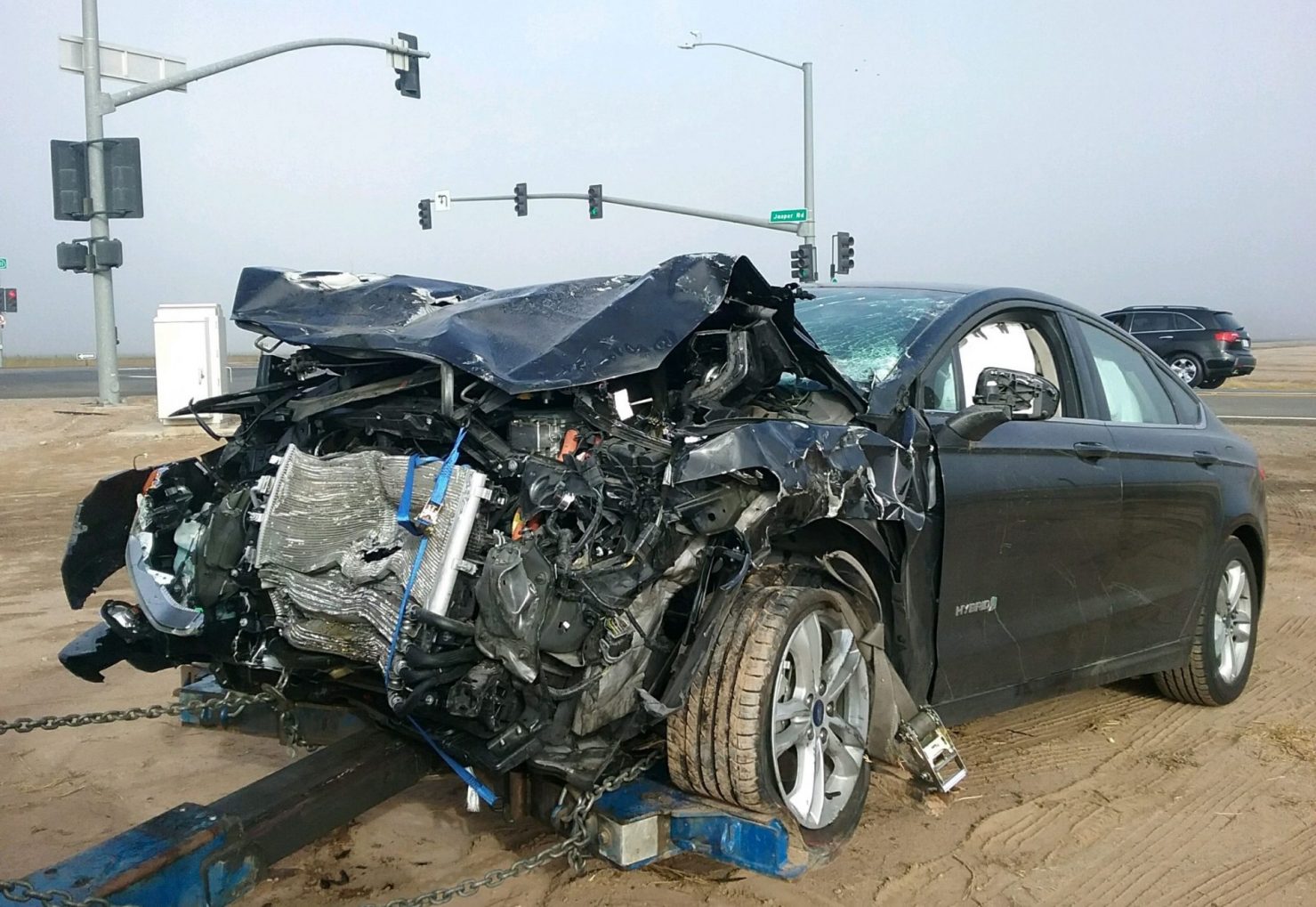 The vehicle driven by a Nevada man that caused a three-car collision in which one person died is shown hours after the incident. A driver stopped at a traffic signal during dense fog was killed on Sunday morning, Nov. 7, at Jasper Road and Highway 111 in Calexico. | COURTESY OF CALEXICO POLICE DEPARTMENT
Home
Public Safety
In Public SafetyRegional News

CALEXICO — One person is dead and three others were injured during an early-morning collision in heavy fog on northbound Highway 111 at Jasper Road, according to police.

A motorist out of Nevada was driving north on the highway at a rate of speed of at least 55 mph at a time when visibility due to dense fog was only about “five feet” when the vehicle slammed into the rear end of another vehicle stopped for a traffic signal at Jasper Road, Calexico Police Chief Gonzalo Gerardo said on Sunday morning, Nov. 7.

Few details were immediately available, but Gerardo said the collision that occurred about 6:20 a.m. caused a chain reaction between the Nevada motorist and two cars stopped at the signal light.

The driver of the first car struck by the Nevada motorist “gets boxed in with a collision because that car hits the car that’s right in front of it at the intersection,” the chief said. “They end up taking the driver to El Centro Regional (where that individual died from their injuries).”

Gerardo said no personal information about the decedent was immediately available, but he said the Nevada motorist and the driver from the third vehicle involved were both injured. The collision is under investigation by Calexico police because it occurred just inside city limits; had the collision happened on the north side of the intersection, it would have been California Highway Patrol’s jurisdiction.

The circumstances around the collision were upsetting to Gerardo, who said that motorist should not have been driving those speeds given the conditions, especially if the individual was not familiar with that road.

“We’re reaching this weather now that’s unpredictable. Just because the speed limit is 60 mph, 65 mph … You know, the California Vehicle Code 22350 is a basic prima facia speed law. … We can still cite you for section even if this person was traveling the speed limit,” the chief said. “If it’s really foggy, or the weather condition is really bad, it’s snowing, or a police officer can ticket you for that.”

Whether the Nevada driver will face any punitive measures for the collision was not known at this time.

Calexico police did not respond to repeated requests for updated information by Tuesday afternoon, Nov. 9.