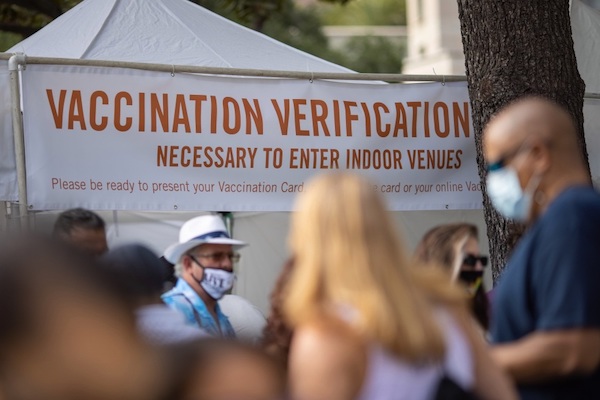 Will California’s strict vaccine rules help bring an end to the pandemic that has disproportionately ravaged communities of color — or further entrench and widen those longstanding disparities?

Answering that question is an increasingly urgent task for elected leaders and public health officials: Starting today, customers must show proof of vaccination or a negative COVID-19 test to enter many indoor businesses in Los Angeles, including restaurants, shopping malls, movie theaters and beauty salons. Business owners say the mandate — which the city plans to start enforcing on Nov. 29 and could result in fines of as much as $5,000 — could be devastating for small businesses in communities with low vaccination rates, which tend to have more Black and Latino residents.

The problem is particularly acute when it comes to public education. Some school districts, including Los Angeles Unified and Oakland Unified, have announced strict vaccine mandates that will require students to get the shot in order to attend in-person classes. But some experts and advocates say the rule — intended to prevent spread of COVID-19 on campus — could also effectively block many Black students from attending school. For example, in Alameda County, where Oakland Unified is located, only 44% of Black kids aged 12 to 17 are vaccinated, compared to 95% of Asians, 70% of whites and 67% of Latinos in the same age group, a Mercury News analysis found.

Providing equitable education amid the pandemic continues to be a challenge for California. A federal judge on Thursday ordered the state to provide high-quality distance learning for students with disabilities who have chosen not to return to campus, and state Superintendent of Public Instruction Tony Thurmond apologized for delays in distributing federal relief funds to private schools serving low-income families.

In other COVID news, a federal appeals court on Saturday temporarily blocked President Joe Biden’s vaccine-or-testing mandate for businesses with 100 or more employees. And California’s coronavirus transmission rates have risen above those in Texas and Florida, a point of concern for public health experts who note that Californians’ demand for booster shots is also lower than expected, especially among vulnerable populations. In San Francisco, for example, only 1 in 5 eligible seniors has received a booster.

California has administered 54,154,808 vaccine doses, and 73.5% of eligible Californians are fully vaccinated.

1. Newsom is nowhere to be found

Where is Gov. Gavin Newsom? The governor hasn’t made a public appearance since Oct. 27,when he received a booster shot of the Moderna vaccine. On Oct. 29, he abruptly cancelled his planned trip to the United Nations climate change conference in Scotland, citing unspecified “family obligations” and noting that he would “instead be participating virtually.” He has yet to do so, though Newsom spokeswoman Erin Mellon told me Sunday the governor is slated to “participate in a couple events” this week “focused on global efforts to advance zero emission vehicles and to move beyond oil.” Meanwhile, San Diego Mayor Todd Gloria is set to travel to Glasgow today, joining a coterie of state lawmakers and Newsom administration officials who are already there (along with quarantined Los Angeles Mayor Eric Garcetti). This morning, California Environmental Protection Agency Secretary Jared Blumenfeld is scheduled to speak alongside Oregon Gov. Kate Brown for an event titled “Partnerships to Reduce Wasted Food on the North American West Coast.”

In a since-deleted Sunday tweet that appeared to lash out at people speculating about her husband’s cancellation and current whereabouts, First Partner Jennifer Siebel Newsom wrote: “It’s funny how certain folks can’t handle truth. When someone cancels something, maybe they’re just in the office working; maybe in their free time they’re at home with their family, at their kids’ sports matches, or dining out with their wife. Please stop hating and get a life.” She had also been scheduled to go to Scotland.

In other Newsom news, Mellon told me that the couple’s eldest child, who recently turned 12, “has received their first dose of the vaccine and will soon receive the second dose. The three Newsom children who are under 12 years of age will also get vaccinated.” Two of the four children tested positive for COVID-19 in late September before quickly recovering from their mild symptoms and returning to school.

2. What CA could get from infrastructure bill

Billions of dollars could flow into California when Biden signs the $1.2 trillion infrastructure package Congress passed Friday after months of negotiation and deadlock. It would mark the latest cash infusion for the Golden State, which is still riding waves of money from multiple federal pandemic relief packages and its own record-breaking budget surplus. Here’s a look at what the White House says California can expect to receive over the next five years:

The package will “accelerate investments in our clean transportation infrastructure, help mitigate some of the worst impacts of climate change and accelerate new projects that will create thousands of jobs,” Newsom said in a Saturday statement. But California’s 11 congressional Republicans, all of whom voted against the bill, weren’t so sure: It “gives billions to California’s failed high-speed rail project, a massive waste of taxpayer money,” said Rep. Michelle Steel of Orange County.

In other transportation news, the U.S. will today reopen its land borders to nonessential travel for the vaccinated for the first time since March 2020 — and officials are warning residents to expect heavy traffic and long waits at the California-Mexico border.

3. Why time changes persist in California

Why, you may have grumbled to yourself on Sunday morning while setting your microwave and oven clocks back an hour, do I still have to do this? Didn’t we vote to eradicate daylight saving time and standard time and just keep one system in place for the whole year? Yes — and no. In 2018, California voters approved a ballot measure that would allow the state Legislature to make daylight saving time permanent — meaning residents would no longer have to change their clocks in March and November. But this plan had two massive caveats: First, it would have to be approved by two-thirds of lawmakers in both the Assembly and the Senate — a feat it has not yet achieved. Secondly, even if a supermajority of state lawmakers did greenlight the plan, it wouldn’t actually go into effect until the federal government gave the OK (although Assemblymember Lorena Gonzalez, a San Diego Democrat, said Sunday that state lawmakers could vote to make standard time permanent without needing federal approval). Like their state counterparts, congressional legislators haven’t reached agreement on the issue — and so we beat on, boats against the current, borne back ceaselessly between standard and daylight saving time.

CalMatters columnist Dan Walters: If California is going to be hydrocarbon free, as Newsom proclaims, he needs to explain how it will happen and what the effects on residents’ lives will be.

Newsom should appoint a Latina to the state Supreme Court: It’s time for a Latina to leverage her legal experience and personal background to make California’s top court stronger and fairer, writes Paul Barragan-Monge of the UCLA Latino Policy and Politics Initiative.

It’s time to ban offshore oil and gas drilling: I’ve seen low-level drug offenses prosecuted with more vigor than corporate malfeasance and the destruction of our environment, argues Alex Lohman, an attorney for the Children’s Law Center of California.

Two men with long criminal histories got caught for stealing bikes. What should city do? // San Francisco Chronicle

Fremont toddler killed by stray bullet during shooting on I-880 in Oakland. // Mercury News

For $1, Editor Jacob Kamaras Gets Site on Richness of San Diego Jewish Community

They moved to rural California for affordable homes. Then the Caldor Fire destroyed the town. // Wall Street Journal

Next
‘Black Friday’-like Lines Appear in Mexicali Ahead of Nov. 8 Opening