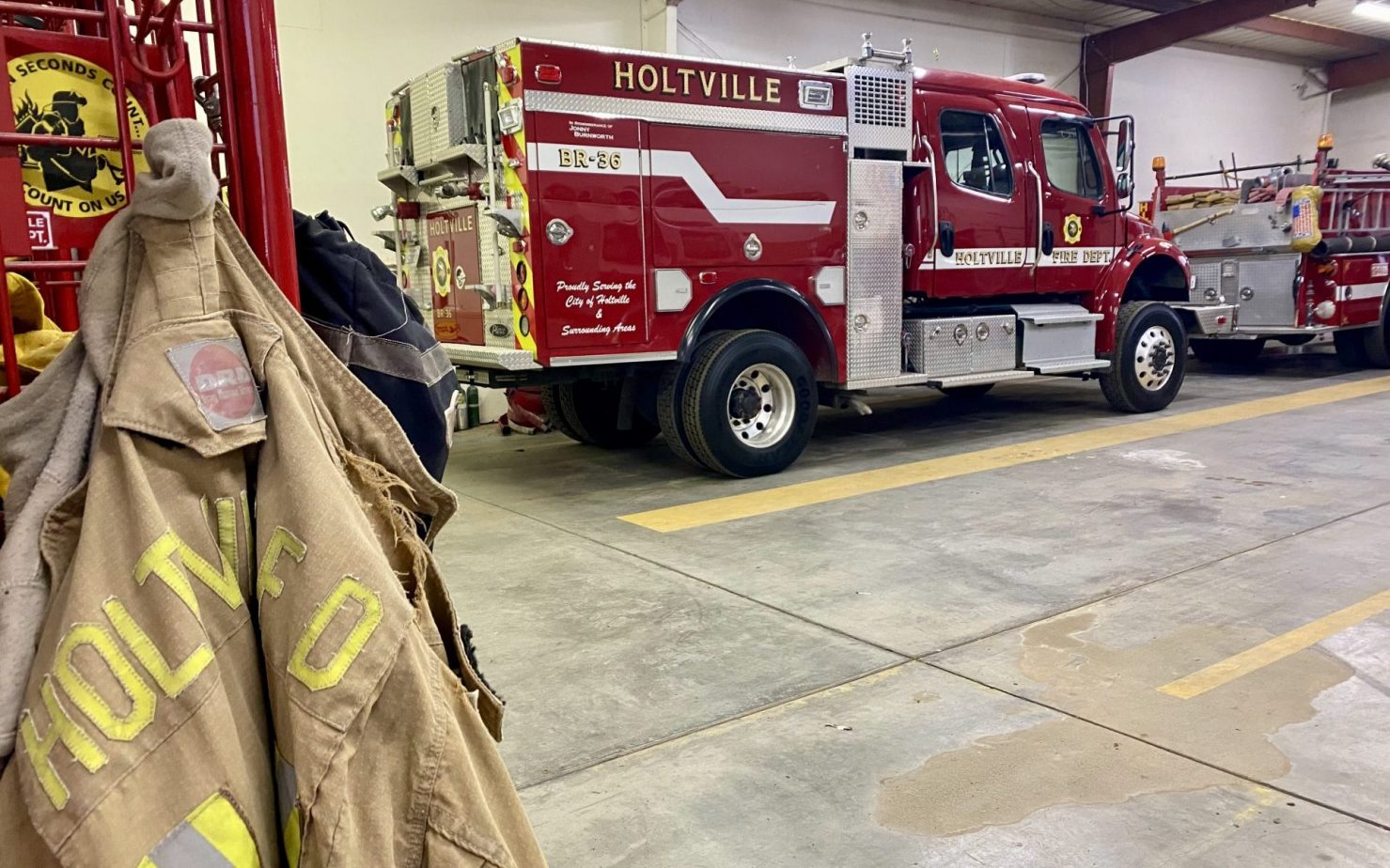 Holtville Fire Department turnout gear hangs in the foreground with the department's brush truck for wildland fire response in the background at the department's station on Monday. Nov. 8. The City Council later that evening reprised the long-delayed public safety building that is planned to house the Fire Department and City Hall. | MARCIE LANDEROS PHOTO
Home
Featured Stories
In Featured StoriesLocal NewsPublic Safety

HOLTVILLE — Some 15 years and several stalled attempts to get serious movement on a new public safety building on donated land, Holtville is ready to get the project going again, but in a different form.

The Holtville City Council voted 4-0-1 on Monday night, Nov. 8, to approve a contract with The Holt Group for design services to revise the master plan for a new public safety building, dividing the project into three phases to make the new building more achievable. Council member Murry Anderson abstained from voting.

“I have gone down many roads with dead ends on this (public safety building), and I finally just kind of arrived at this idea that we should set this out into phases so that we can do it in chunks,” City Manager Nick Wells said during the council meeting.

Wells’ realization came after beginning of this year, when a state Community Development Block Grant fell through despite the city being awarded the grant. The issues with this grant stemmed from the low amount of funding available, only $3 million. The estimated cost of the building is between $9 million to $15 million, so it is now the city’s hope that by breaking the project up it will be easier to get the funding needed to begin construction.

The new public safety building would be located at Sixth Street and Pine Avenue, just north of where the Holt Park sits. It has been in development for more than 15 years, originally intended to a combined fire and police department headquarters. With Holtville now outsourcing its police services to the Imperial County Sheriff’s Department, the building is now being reimagined as a new Fire Department and City Hall.

“The first phase would be the apparatus phase, where the fire trucks park. The second would be apparatus and administrative portion, which would only support the Fire Department. The third phase would then be City Hall,” said Jack Holt of The Holt Group, the city’s contracted city engineer.

The initial apparatus phase will focus on the areas of the Fire Department that house the equipment and vehicles that the firefighters need to do their job. It will have to be large enough two house three fire engines, a rescue vehicle, a command vehicle, and a brush truck for wildland fire response. Chief Alex Silva is a strike team leader when county department respond to forest fires.

The 1.71 acres of land for the planned public safety building was secured many years ago, through the donation of land by former Holtville resident Milton Meeks. In the early 2000s, plans initially were drawn, but due to a series of design changes involving environmentally friendly changes, the project was placed on hold, and now the costs have more than doubled.

While the exact cost of the building can’t be determined until the new plans are drawn, the cost of drawing the plans and breaking the project into phases come to $14,800 out of the general fund. That drew the attention of council member Murray Anderson.

Anderson questioned both Wells and Holt about the cost, unsure whether the cost should be covered since the city outsources its engineering department to The Holt Group. Wells clarified the city’s relationship with The Holt Group explaining that they only contract with them on a per-project basis, also establishing that the city does not pay The Holt Group a regular retainer, so these services must be paid for as they come up.

Wells’ explanation was not enough to sway Anderson, who chose to abstain from voting, citing his lack of knowledge and experience working with The Holt Group in their role as Holtville’s engineering department.

“The reason I abstained is because I don’t feel like I have enough information or knowledge of what exactly The Holt Group does for the city,” Anderson said in an interview after the meeting outside City Hall. “I am the new guy on the block, it’s my first year on the council, so I don’t have the background or knowledge that my fellow council members have so I didn’t feel I had enough information to vote for the project.”

Next
For $1, Editor Jacob Kamaras Gets Site on Richness of San Diego Jewish Community