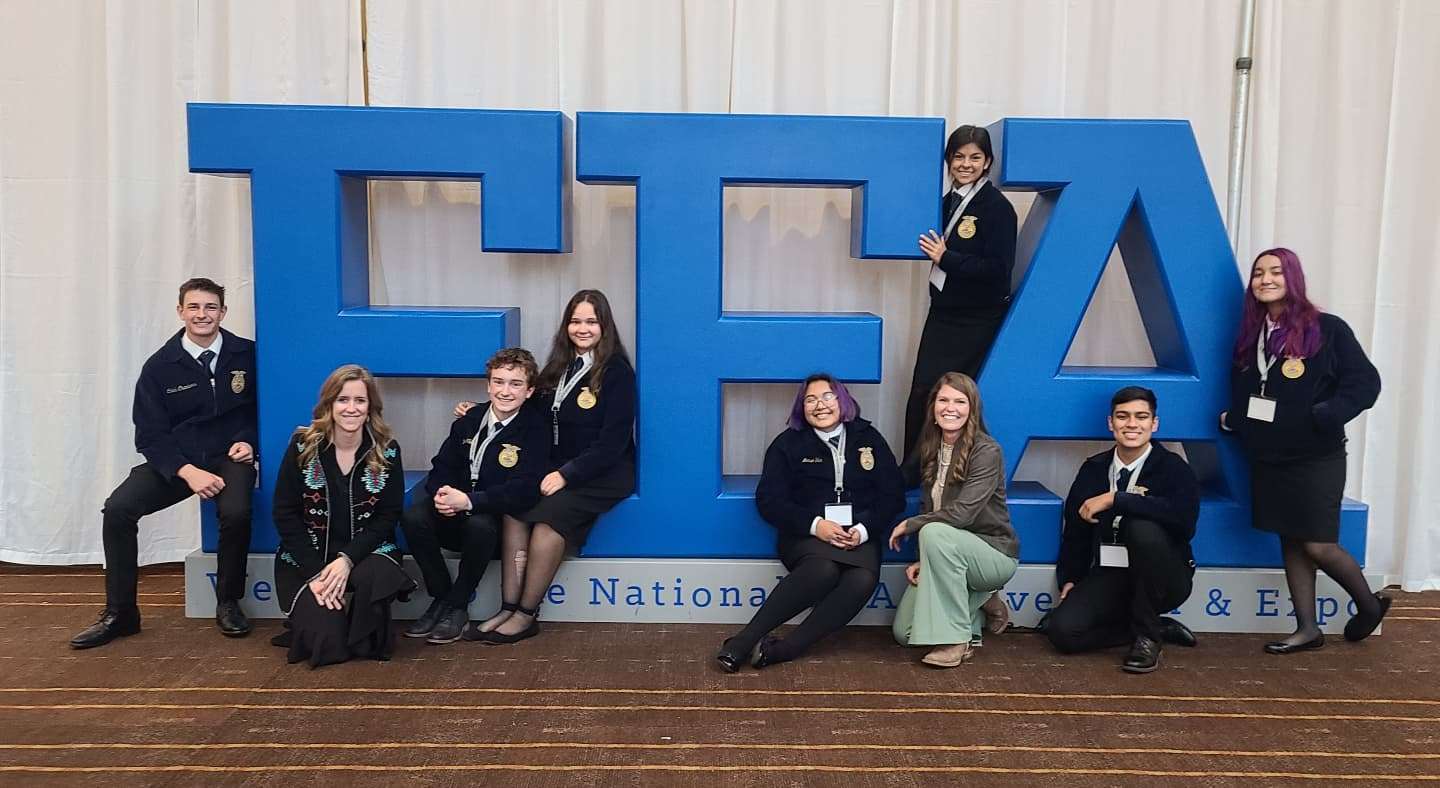 Members of the Holtville High School FFA chapter pose for a photo during the 94th National FFA Convention and Expo in Indianapolis Oct. 27-30. | COURTESY PHOTO
In AgricultureEducationFeatured StoriesLocal News

HOLTVILLE — Future farmers of the Imperial Valley made their way to the the 94th National FFA Convention and Expo in Indianapolis late last month, giving these high school students a chance to experience something outside their local environment and something meant to help their futures.

Attendees of what is considered world’s largest school youth convention got to see exhibits from students around the country, some entered in finals of competitions and some not. The local officers got to see the finals for different competitions, even some of the Holtville chapter got to participate in areas such as parliamentary procedure. It also gave the Viking students the chance to see how other FFA chapters run as well as what projects they are working on.

Workshops and leadership sessions were available for students to attend, as well there was a large college and career expo.

Arianna Venegas, a 17-year-old senior, said seeing the other members from all around the United States was something she loved.

“Just seeing members from all around U.S. being there showing what they came to do, it’s incredible to see,” she said.

“It was really fun. One of the best experiences of my entire life,” 15-year-old sophomore David Magallon said.

“There was a big sense of community, too, seeing how everyone had something in common,” added Gannon Strahm, 15, also a sophomore. “It was just really cool to see.”

Seventeen-year-old senior Melanie Orozco participated as a National Delegate, though she did get a chance to be around her Holtville peers as much. She said one of her favorite experiences at the convention was just meeting the people from other states, hearing different state accents and getting out of her “little chapter bubble.” That was a sentiment echoed by her fellow Holtville officers.

Melanie added that because of her delegate experience she was able to get a recommendation to improve “discovery chapters,” or middle school FFA chapters, for children who are planning to get into the high school program and improving competitions for them. Her suggestion will be implemented all around the U.S.

“It was really cool that something I said in a meeting is going to implemented into FFA in the entire nation,” she said.

The Holtville students said this convention has also helped them see what careers are out there for them, not just in agriculture.

Holtville FFA adviser and Agriculture Department head Lindsey Cox says this convention gives the students an opportunity to see what the future can hold for them when they continue with FFA and even careers they can seek after high school.

Not every FFA student goes into the agricultural field, but those who have been in the program have gone on to be in leadership and team positions that are attributed to time in FFA.

“This group that we took are wonderful young people,” Cox said. “It was great to see them take advantage of all those opportunities and get excited about it.”

Holtville even got one of the biggest honors of the convention. David Lopez, 2019 Holtville High graduate and former Holtville FFA officer, “retired” at the convention and became the first National Officer to be selected from Holtville FFA. He gave his retiring speech from the position of National FFA Western Region vice president in front of the entire convention, reflecting on his history in the FFA and the need he felt to be someone people could look up to and be there for them.

He asked that people treat each other with kindness and to “see people.” He spoke of another Holtville FFA member, Emmanuel Lucero, who inspired him to pay attention, be kind, and made him want to be a light for another person.

“I wanted to be someone’s Emmanuel, a light that guide’s people to be their best self, to pay attention to people and to treat them with kindness,” Lopez said.

The five officers were proud to wear the blue, Holtville-labeled jacket that represented not just their hometown but Lopez’s home, too.

It was a struggle to get to the convention this year with lack of fundraising opportunities due to the COVID-19 pandemic, but sponsors came through to fund the trip for the five students.

Cox and her students all wanted to give thanks to the sponsors who got them to Indiana. Cox said it was very moving to see how much the community supports the students of Holtville.

This has been the first time in about five years that Holtville has been able to go to the National FFA Convention, and Cox says they are ready to do it again in the future.