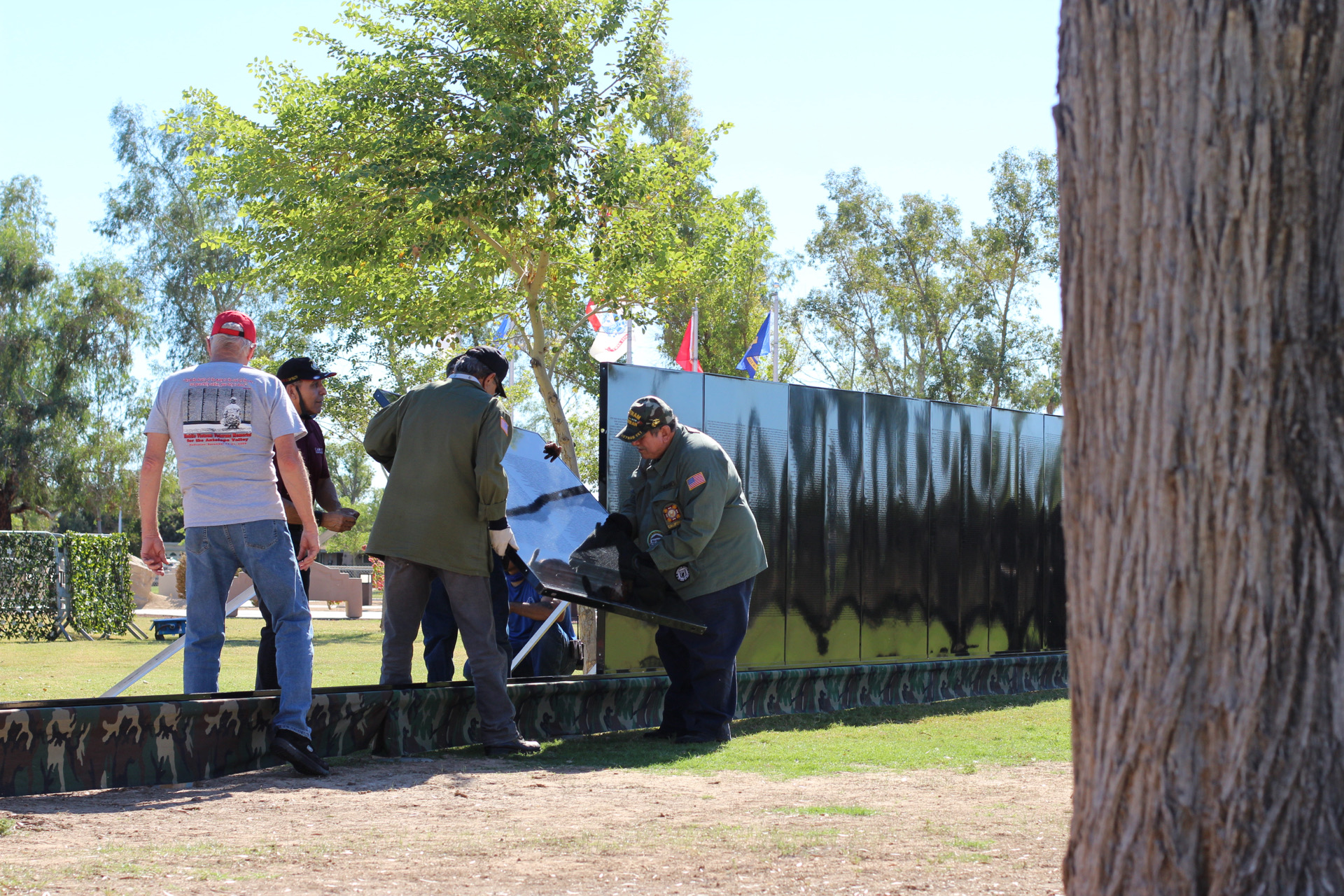 Volunteers from the Veterans of Foreign Wars Post Post 3905 work alongside AV Wall: Mobile Vietnam Memorial Wall staff to assemble the wall after a Gold Star families ceremony for locals killed in the Vietnam War. The wall will be at Bucklin Park in El Centro for events and visitors through Monday morning, Nov. 15. | MEGAN JONES PHOTO
In Featured StoriesRegional News

EL CENTRO — Carlos Zaragoza and his brother, Sgt. Victor Zaragoza, were both serving in the U.S. Army when Victor was killed in action on Feb. 20, 1970. It’s a painful memory that haunts the Zaragoza clan to this day.

“Some people in my family don’t even want to talk about it because it’s still too close, it was just like it happened yesterday,” said Zaragoza, a Holtville resident and commander of the American Legion Bradley-Keffer Post 138, of his brother’s death during an interview on Wednesday, Nov. 10.

Carlos Zaragoza was among a number of Gold Star families gathered for a special ceremony at the AV Wall: The Mobile Vietnam Memorial Wall in El Centro’s Bucklin Park, which arrived on Wednesday and will be in town through Monday morning, Nov. 15, for numerous Veterans Day-related community and private remembrances.

“It brings back memories, I think, for anybody who has a battle date or a brother that was killed in action; it’s never far from you. It’s always with you. You don’t dwell on it, but it doesn’t escape your consciousness,” Zaragoza said of the seeing the half-scale Vietnam Memorial Wall.

Victor Zaragoza’s name is on mobile wall, just as it is on the full-size memorial in Washington, D.C., inscribed on “Panel 13w, Line 39,” an emotional commemoration to the infantry platoon sergeant’s sacrifice. Sgt. Zaragoza, who was part of the 101st Airborne Division, 2nd Battalion, 501st Infantry, A Co., died from hostile small arms fire in Thua Thien province, South Vietnam.

The Veterans of Foreign Wars Post 3905 helped bring the mobile wall to El Centro with the support of the city of El Centro and other organizations, and the first event held on Wednesday was meant to bring closure and healing some 50 years later to surviving Gold Star families, veterans, and members of the community affected by the Vietnam War.

The ceremony included an invitation to those gathered to help assemble the mobile wall, which is visiting from its home base of Lancaster, California.

“Though these Gold Star families for over 50 years have had people say they’re sorry, they give their condolences. It doesn’t take away from the emptiness of their hearts of losing their loved ones,” Pete Mallinger, pastor of Calvary Chapel in El Centro and a VFW member, said during the opening invocation of the ceremony.

For these Gold Star families, or families who have lost someone who served during military service, the memorial and ceremony was an emotional experience even after all these years. The ceremony began with a procession that traveled throughout the city of El Centro, going by schools within city limits. Students of all ages left their classrooms to stand by their school fences so they could see and wave to those in the procession.

The caravan was led by a vehicle towing a trailer housing the unbuilt memorial and was followed by dozens of motorcycles driven by a mix of law enforcement and veterans through the American Legion Riders and Patriot Guard Riders, among others. There were also vehicles of various government and law enforcement groups following up behind the motorcycle caravan.

The procession ended at Bucklin Park, where the memorial would be empaneled on a foundation built earlier in the week by the VFW, the city and volunteers.

“This morning’s procession … was an incredible tribute to your loved ones. I have never seen a community so appreciative of a team of people riding through. It was absolutely incredible,” said Stacia Nemeth, treasurer of board of directors of the AV Wall: The Mobile Vietnam Memorial Wall, during the ceremony. “So please, I hope you feel the love of this morning event and the Mobile Vietnam Memorial Wall.”

Once everyone was in their seats, under a canopy in front of the base of where the wall would be assembled, the VFW began honoring the Gold Star families, calling them up one at a time to present them with a certificate from the Department of Defense. All who were there had lost loved ones in Vietnam.

The VFW also honored “Battle Buddies,” or veterans who lost someone who they served beside during the war, with their own set of certificates.

After the ceremony ended, Gold Star families and Battle Buddies were invited to carry the panels with their family member or friends’ names to the wall to have it assembled.

“Thanks and honor to you and your families for the service and sacrifice. Your veteran answered our nation’s call and proudly served in the footsteps of previous generations of American servicemen and women,” said Augie Anderson, Gold Star ambassador with the AV Wall.

“It is the privilege to present you with a certificate of honor and recognition of the patriotism, service, sacrifice of your husband, wife, son, daughter, sister, brother, and family. I have a brother on the wall. I was 12 years old when he was killed in action,” Anderson, of Apple Valley, said. “And seeing his wall put up every year, it helped my healing after 50 years of him being in the grave.”

The ceremony and the memorial meant so much more to the surviving veterans than simply honoring those who were lost, Zaragoza said. Due to the political environment at the end of the Vietnam War, many veterans found themselves without the support that is more commonplace today.

“I think it’s a great honor for the families, especially for the Vietnam vets, because of the way that we were treated during the course of the war. It was an unpopular war, and then the public or many people more like it, started blaming the soldiers themselves,” Zaragoza said after the ceremony. “And when we came back, when we came out of the military, we had to just try to blend back into society. And after having been in the military, you don’t ever quite do it. Your hair is shorter, you act different. You feel different. But that was then. This is now.

“I think we’ve gotten far away from blaming such wars on our military instead of to blame … These are placed on the politicians that get us into these Godforsaken wars that have no objective or no end,” he added.

About 2.7 million American men and women served in Vietnam, with 58,220 of them never returning home. The ones who did return often were faced with societal rejection, discrimination, and for some even violence. This period also marked the first time in which the United States failed to welcome its veterans as they returned home from war.

(Read this story on the preparation for the AV Wall for a list of related events through Monday, Nov. 15.)