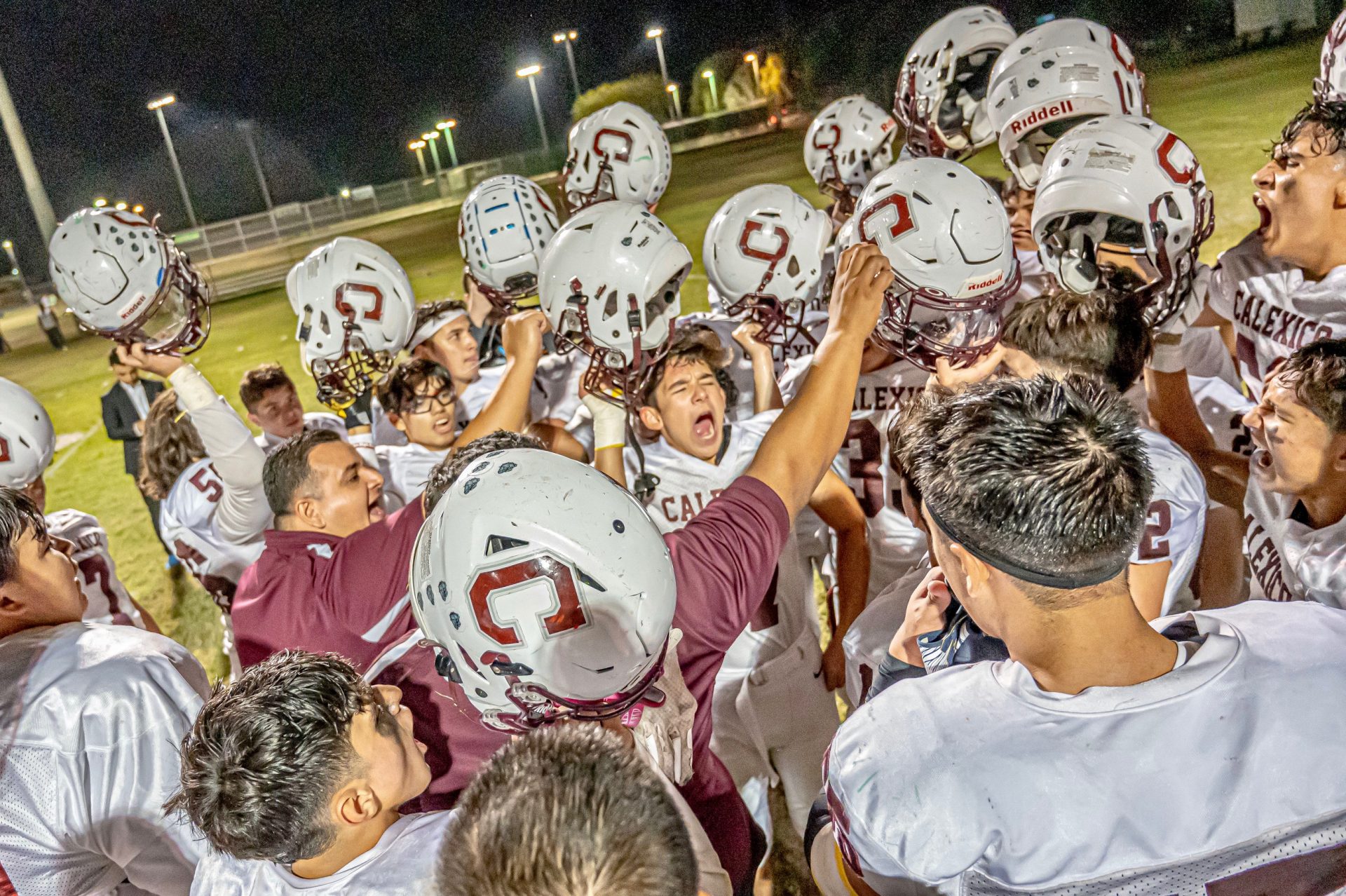 HOLTVILLE — The 2021 Calexico High School football team is the first team in school history to advance to the CIF-San Diego Section semifinals with its 14-12 victory over Holtville on Friday, Nov. 12, at Birger Field here.

The sixth-seeded Bulldogs (7-5 overall) will now move on to face second-seeded Mission Bay High of San Diego at 7 p.m. on Friday, Nov. 19, for the right to advance to the Division V championship game. Mission Bay blew out 10th-seeded El Cajon Valley, 35-7, on Friday, Nov. 12, and will host the semifinal contest with Calexico.

“It’s the playoffs and we know each week the competition is going to get better and better,” said Ernie Sanchez, the Bulldogs’ senior running back who had 91 yards rushing and a touchdown against the Vikings. “We knew it was going to take all of us executing and doing our job to win this game and we were able to get it done.”

Calexico led 14-0 entering the fourth quarter and had to hold on after the third-seeded Vikings (8-3 overall) mounted a comeback.

Holtville scored on the first play of the fourth quarter when senior Payton Iten scored on an eight-yard touchdown run. The two-point conversion failed, but the Vikings were within a score at 14-6, with 11:54 left in the game.

With 4:01 left in the game, Holtville got the ball after a Calexico punt and went 38 yards in seven plays with senior Donovan Johnston finishing the drive with a six-yard touchdown run. Trailing 14-12, the only option for the Vikings was to try for the two-point conversion.

Holtville tried a direct-snap to upback Seth Iten who got stuffed by the Calexico defensive line and came up well short of the goal line and the tying two points.

“We put in guys who had never played defense but we brought in the big boys and put them in the middle to plug the A gap,” said Fernando Solano, Calexico High’s second-year head coach. “We had seen them run that play and knew it was coming up the middle.”

The Vikings attempted an onside kick but the ball stopped short of going the necessary 10 yards, giving the Bulldogs the ball at the Holtville 47-yard line with 1:23 left. Calexico failed to run out the clock and the Vikings had a final opportunity with 34 seconds left and the ball at their own 38-yard-line.

After three completions from senior quarterback Spencer Hilfiker, Holtville had moved the ball to the Bulldogs’ 34-yard-line with 10 seconds remaining. Rather than attempt a 51-yard field goal, the Vikings attempted another offensive play with Hilfiker getting sacked and stripped of the ball by Sanchez as time ran out.

“I knew it was going to be the last play and knew I had to give it my all and get to the quarterback,” said the 17-year-old Sanchez. “I got my arms around him and was able to knock the ball out.”

Hilfiker, who completed 14-of-24 passes for 110 yards and an interception, said he would have liked a few more seconds to move his guys into better field-goal position or even the end zone.

“Give us 30 more seconds and we could have gotten it done,” said the 18-year-old Hilfiker. “We didn’t come out with the energy we needed to have tonight. Give credit to Calexico, they did a good job of stuffing our run tonight.”

After a scoreless first quarter, the Bulldogs got on the scoreboard with 9:14 left in the half when senior quarterback Abram Zazueta executed a perfect play fake and hit sophomore Andrew Rivera for a 52-yard touchdown pass. Senior Lorenzo Rodriguez booted the extra point to put Calexico ahead 7-0.

“We had been working on that play all week and when I saw the safety bite I knew I had to just lob it up there,” said Zazueta, who completed 3-of-5 passes for 62 yards and the touchdown and also rushed for 23 yards on 11 carries. “This was the rematch of the year. I have a lot of respect for those guys over there (Holtville) but tonight we executed and did our jobs and got the win.”

The Bulldogs increased their lead to 14-0 with 2:01 left in the half when Sanchez broke free for a 41-yard touchdown run. Rodriguez again booted the extra point to give Calexico the two-touchdown advantage.

“I saw it open up down the middle and as soon as I got through the line I knew I had to shift it into overdrive and was taking it to the house,” Sanchez said. “The offensive line did an amazing job and executed their blocks all night.”

The Bulldogs’ defense held the potent Vikings’ rushing attack to just 112 yards on 33 carries and didn’t allow Holtville inside their 39-yard-line the entire first half.

“It wasn’t hard to motivate them for this game,” Solano said about the rematch from a Sept. 17 game that saw Holtville beat Calexico, 29-28. “They knew the job ahead of them and they put in the work this week in practice and it showed here tonight.”

Bulldogs Get Ready to Go Off Chain Before Game