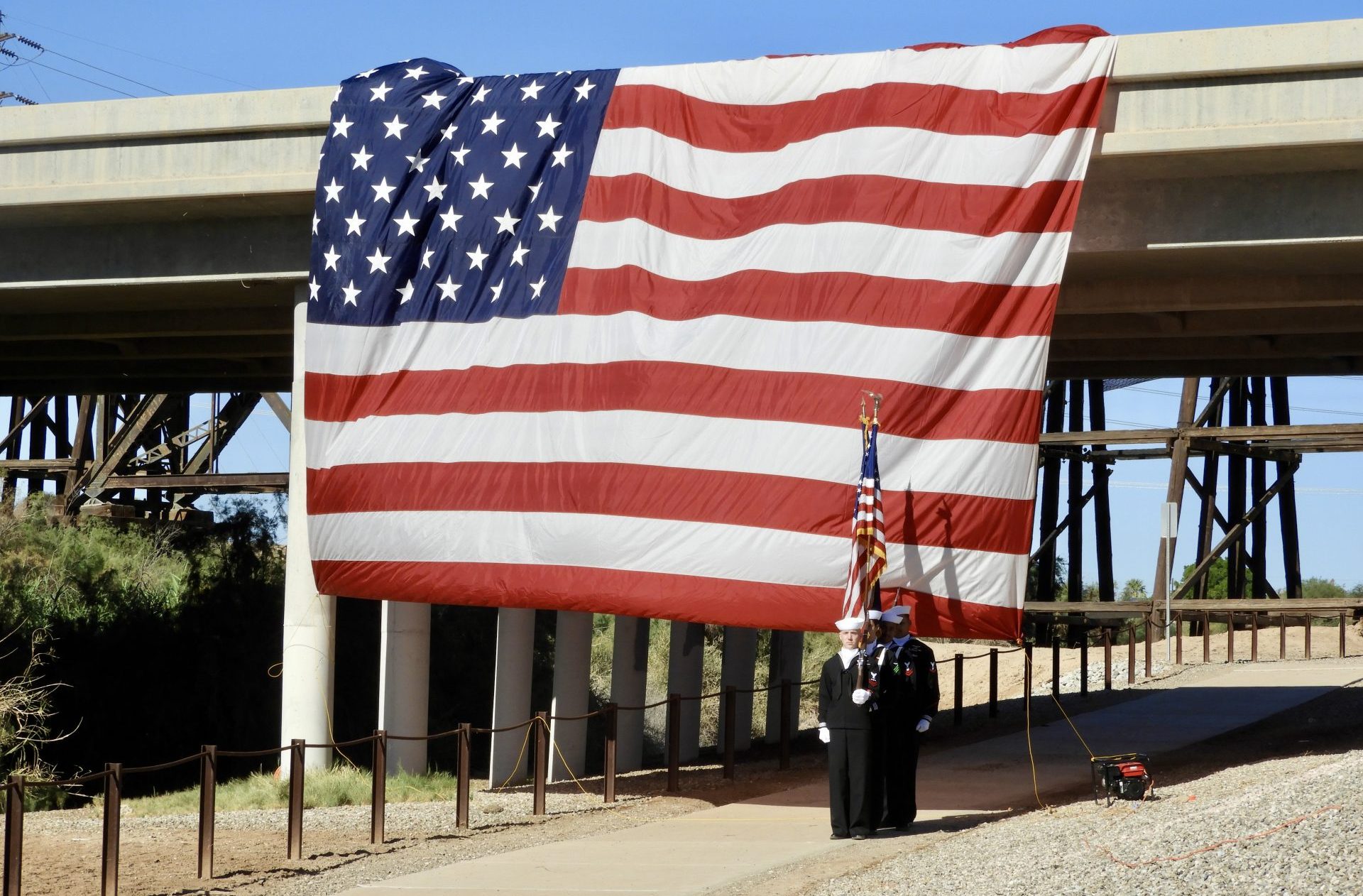 HOLTVILLE — More than 18 years after the combat death of Holtville native U.S. Marine Cpl. Erik H. Silva, the Alamo River Bridge that serves as the entrance to his hometown was renamed in his honor.

A sign proclaiming “Marine Corporal Erik H. Silva Memorial Bridge” to commemorate the heroic sacrifice he made in Operation Iraqi Freedom was unveiled in a ceremony at Earl Walker County Park in Holtville on Friday morning, Nov. 12, just one day after Veterans Day.

“I heard a saying that says a man dies twice, right? It’s like once, when his soul leaves his body, but then again when his name is forgotten, so Erik gets to skip one of those,” said Nathaniel Donnelly, who served with Silva in Iraq. “The name of this bridge is going to go on in perpetuity, so he’s not going to have to go through a second death, which very few people get to not do.”

Silva was assigned to 3rd Battalion, 5th Marines, 1st Marine Division, at Camp Pendleton, near Oceanside when he was deployed to Iraq as an infantry rifleman. Silva was killed in action after his platoon was ambushed on April 4, 2003. He was just 22 years old, with about six months left in his enlistment.

He had told friends and family he planned to join the California Highway Patrol upon his return home.

“It has been 6,798 days since my brother, Erik Silva, was killed in combat operations in Iraq, and (his) Marine Corps brothers are here today. I can speak on their behalf that not a day goes by when (we) don’t think of him,” said Isaac Silva, Erik Silva’s older brother, as he opened the ceremony.

Erik Silva was born on Sept. 10, 1980, in Brawley and grew up in Holtville, where he graduated from Holtville High School in 1998. Erik was described as a friendly and kind young man by all who spoke during the ceremony. He was drum major and a trumpet player in the Holtville High School marching band, a member of the varsity golf team, and an avid baseball and soccer player.

Path to Renaming the Bridge

To honor Erik Silva’s life and sacrifice, his family, and the city of Holtville, District 5 Imperial County Supervisor Ray Castillo said the American Legion Bradley-Keffer Post 138 and the Holtville post’s auxiliary, as well as the county of Imperial collaborated for years to have the bridge named after Silva.

All discovered that the process of getting the bridge renamed was a long and arduous one that required a piece of legislation before it could come to fruition.

“I didn’t realize how difficult it is. You got to get a bill to the Legislature, then it goes on to public works, then Caltrans; I mean, it’s a lot,” Castillo said in an interview after the ceremony. “I’m glad that we’re finally here. And it took a couple of years to obtain this.

“Erik, he’s been gone 18 years now, so this is going to be very pleasant,” Castillo added.

For Castillo, Silva wasn’t just a member of the community and a hero, Silva was a member of his extended family, which motivated him to not give up on the renaming. He spoke fondly of the corporal, focusing not on his military career, but on his kindness and strength of character.

“I live here in Holtville, so coming into town now, I’m going to see his name and remember him and what a good kid he was,” Castillo added. “All the testimonies you could hear were how good a kid he was, and he was a good kid.”

Following the signing of the resolution, the family had to raise more than $6,000 to purchase the sign and were able to do so with the support of the Holtville American Legion post and auxiliary.

Assembly member Eduardo Garcia, D-Coachella and the Imperial Valley’s representative, served as one of the driving forces behind the resolution in Sacramento and was in attendance on Friday.

During this ceremony, Garcia spoke highly of Holtville, explaining that he had driven across the bridge many times on his way to visit his cousins. After the ceremony, Garcia said how naming the bridge and keeping Silva’s memory alive were truly special experiences for him.

“We get to do a lot of — quote, unquote — important things, but this special ceremony will have a lasting mark on this road, not just for the families, right? I don’t know about you, but when I’m driving through freeways, highways, and I read the name of a road that’s being put forward in honor of someone, you wonder, who is that person?” Garcia said.

For the Silva family, the renaming of the bridge provided a sense of closure that they haven’t had in more than 18 years.

Silva’s niece, Air Force Airman 1st Class Skye Silva, led the pledge of allegiance during the ceremony honoring an uncle that she had few memories of; she was just 2 years old when Cpl. Silva was killed. For her, it was the closure her family needed, having experienced so much loss over the past 18 years.

“I think that this went really well for everybody. Everyone has their ending, their closure and what everybody needed,” A1C Skye Silva said in an interview after the ceremony.

Among the stories older brother, Isaac Silva, shared, was a funny yet poignant one.

“He was a big fan of baseball. As a child, he introduced himself as ‘Erik Dodger’ at a family reunion. At the time I think he was only about 4 years old, too young to realize that rooting for the Dodgers wasn’t a good thing,” Isaac joked during the ceremony. “Thank you, Dad, for turning us to root for the Angels, because Erik is now an angel.”