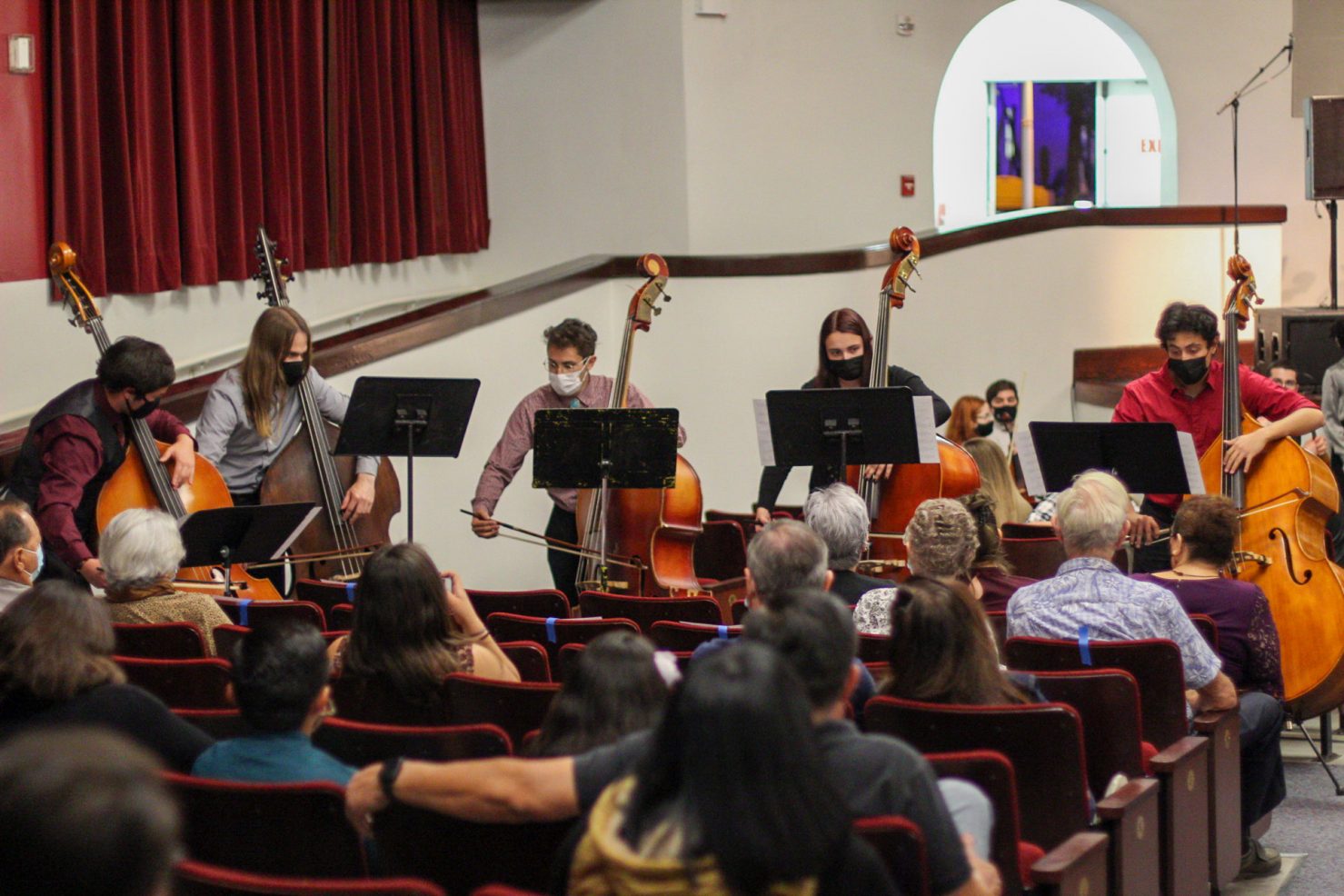 CALEXICO — Some 250 musicians arrived from San Diego State University’s main and Mesa campuses to perform in the first-ever symphony and chorale “Music of the Masters” concert at SDSU-Imperial Valley campus in Calexico late Friday afternoon, Nov. 12.

SDSU’s Symphony Orchestra, Wind Symphony, and the main campus’ chorus transformed Joseph Rodney Auditorium from a single-level stage to a stage with an orchestra pit by using the first few rows of the theater to accommodate the stringed instruments.

Interim SDSU-IV Dean Mark Wheeler opened the night by taking a moment to acknowledge that the celebration was taking place on indigenous land and expressed his gratitude to the performers and attendees as well as members of the staff and faculty who worked to make the performance possible.

Wheeler said he was excited to resume live entertainment after the pandemic had restricted so many indoor public engagements. A resounding applause boomed through the auditorium in agreement.

He reminded everyone of his dedication to bring more cultural arts events to the community at SDSU-IV. To show his commitment to his pledge, Wheeler asked that two donors match his contribution of $1,735 toward payment for a piano for the Imperial Valley campus auditorium.

No sooner had he finished his sentence when the hand of Dr. Eric Rice shot up in agreement to help purchase a piano; Rice was one of the original faculty members of SDSU-Imperial Valley campus in the late 1950s. A price tag of $1 million is the estimated cost, according to Wheeler, to upgrade the sound and lighting in the performance space so that the university is more capable of accommodating a greater number and variety of musical acts.

The Wind Symphony started the night with a vibrant jazz piece, “Blue Shades,” by Frank Ticheli. As the chorus assembled at the foot of the stage, the Symphony Orchestra performed Andres Martin’s “Chimera,” a piece, as explained by the conductor, played on large instruments that echo the sounds of animals such as a melodic songbird, a seagull’s caw, and a lioness’ roar. The music continued with the chorus singing “Sure on the Shining Night” by Morten Lauridsen and a lively folk song from Northern Brazil sung in Portuguese as well as a song accompanied by the piano. The orchestra and chorus collaborated to conclude the chorale performance to a standing ovation for their astounding rendition of two movements of Mozart’s “Requiem.”

The night ended with a ballet called “The Firebird” by Igor Stravinsky. Among the violinists was a Southwest High School graduate. The conductor recognized the Imperial Valley native for the accomplishment of earning first chair, first violin, which takes on the responsibility of leading the violins along with the conductor.

The Calexico event was well attended and hosted music aficionados from throughout the Imperial Valley who reiterated the importance of access to the arts in our local community. Among those in attendance was Carmen Durazo, member of the Calexico Arts and Historical Commission and namesake to the Cultural Arts Center in Calexico.

“It was the first performance in almost two years since being isolated because of COVID, so it was outstanding,” she said. “Just what the community needs.”

As Dean Wheeler introduced the performers, he made it clear that he prioritizes nurturing the artists in our community.

“We need to bring more cultural art to the Valley,” said Daniel Sohn, chief executive officer of the Imperial Valley Regional Chamber of Commerce said. “I know that Dean Wheeler is working hard with a lot of community partners to make sure that happens, and so I am certainly in support of it.”

Next
Over 100 Entries in Brawley Parade Brings Huge Crowds