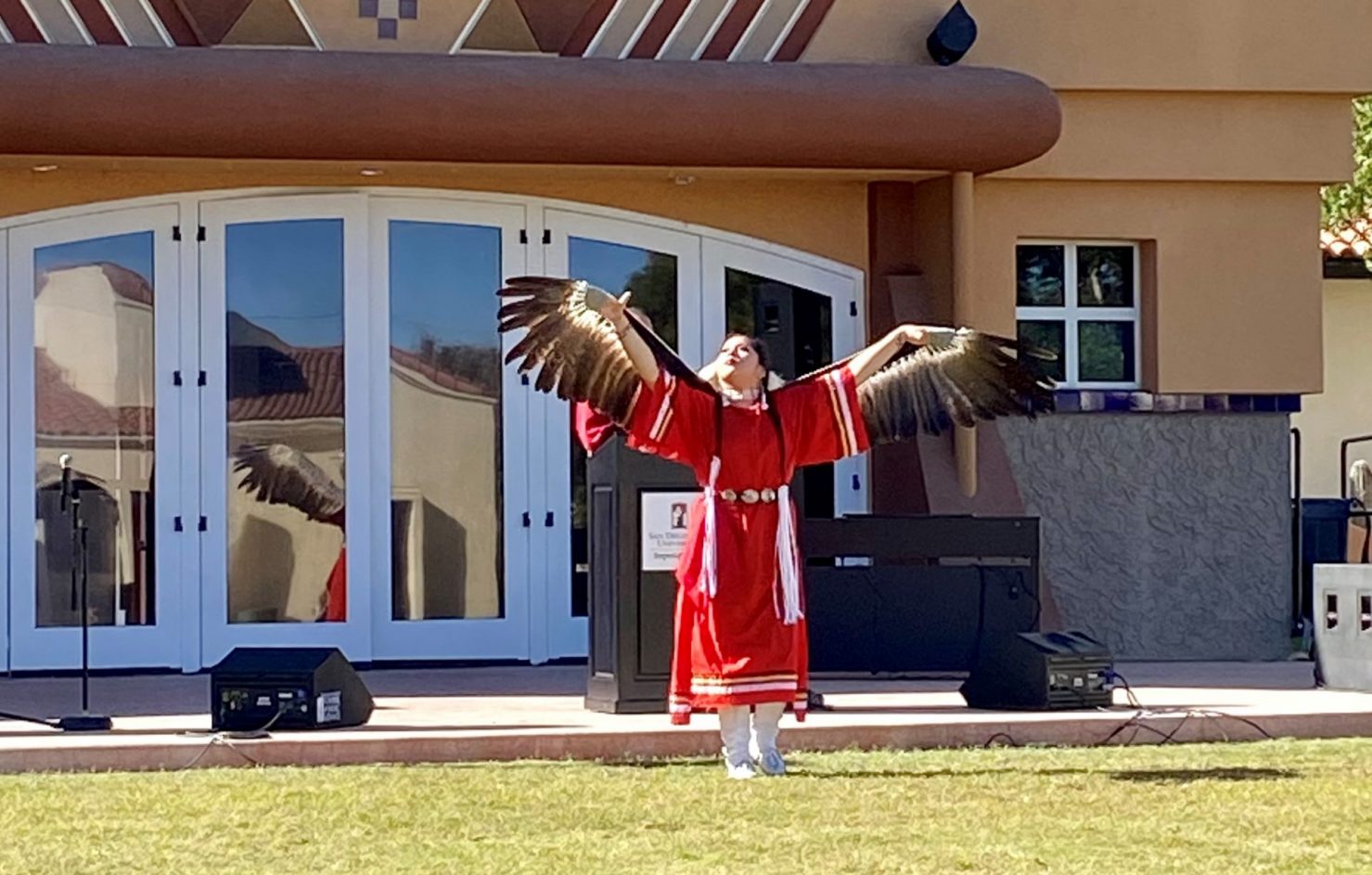 CALEXICO — San Diego State University-Imperial Valley campus hosted artists from El Centro, Seeley, Calexico, and San Diego to celebrate in what was described by campus officials as a “faith music jamboree” on Saturday, Nov. 13 on the Rollie Carrillo Quad.

The space was set up with tables and chairs in the shade for attendees to enjoy an afternoon of multicultural arts, including traditional Native American dances, gospel and rap music, and other live music performers, among them was the Imperial Valley College Choir led by music professor Dr. Hope Davis.

The event, titled “Diversity in Praise: Celebrating Communities in Spoken Word, Song and Dance,” was created and organized by Professor Hassan El-Amin to celebrate the diverse ways cultures praise God through music.

Dr. Vincent Whipple was invited to the campus to do the official Native American land acknowledgment and share a little bit about Native American culture. Whipple is an artist in residence at SDSU through the Arts Alive Program for 2021-22

“The land acknowledgement acknowledges the traditional lands of the native people of this area,” Whipple explained. “The main San Diego campus is on the land of the Kumeyaay, the land here in Calexico is closer to the Quechan to the east in Yuma and the Cahuilla to the north in the Palm Springs area and south in Mexico the Nahuatl and Aztecs.

“The campus is doing its best to acknowledge that history,” he said, “that the native people have been here for generations.”

Whipple’s daughter, Valerie Whipple, was accompanied by her father on the drum to perform two traditional Native American dances: the Eagle Dance and the Fancy Shawl Dance.

Valerie Whipple soared through the grassy space in front of the familiar façade of the Steppling Art Gallery.

Pastor Gregory Brown of El Centro’s Second Baptist Church led a prayer for thanking God for the beautiful day on Saturday and to appreciate the SDSU-IV interim Dean Mark Wheeler’s invitation to worship through art.

Local community leaders Marlene Thomas and Hilton Smith were each invited to speak about their engagement with the local community. Thomas, known to friends as “Imani,” invited anyone who is interested in “social justice through civic engagement” to join them in El Centro at 510 Main St., where the group Imperial Valley Social Justice Committee has its headquarters.

“We may be a small county and we all might know each other but the one thing for sure, we have all the same ills of our country and that is what we are trying to address,” Thomas said.

Hilton Smith, the leader of Black Lives Matter Imperial Valley, echoed the need for reform accountability within our county. “Diversity is our strength, unity is our goal and adversity is our challenge,” he said.

Performances transitioned from outdoors on the quad to inside Rodney Auditorium. Michael King, director of facilities for SDSU-IV, performed with Next Level, a San Diego gospel group.

Dr. Vo’s Offices Raided by Feds for 2nd Time in a Year

“Were excited to see all this life happening on our campus right here in Calexico,” King said. “We’re here to say that we are in the community, we are part of the community, and we want to love the community the way they love us.”

As the sun set on the afternoon event, Evelyn Gomez, Calexico resident and singer in the Imperial Valley College choir, shared her thoughts.

“I think it’s really great to come together and watch so many different kinds of performances at a free event.”

Next
Will California’s Plan for Clearing Camps for Unhoused Work?