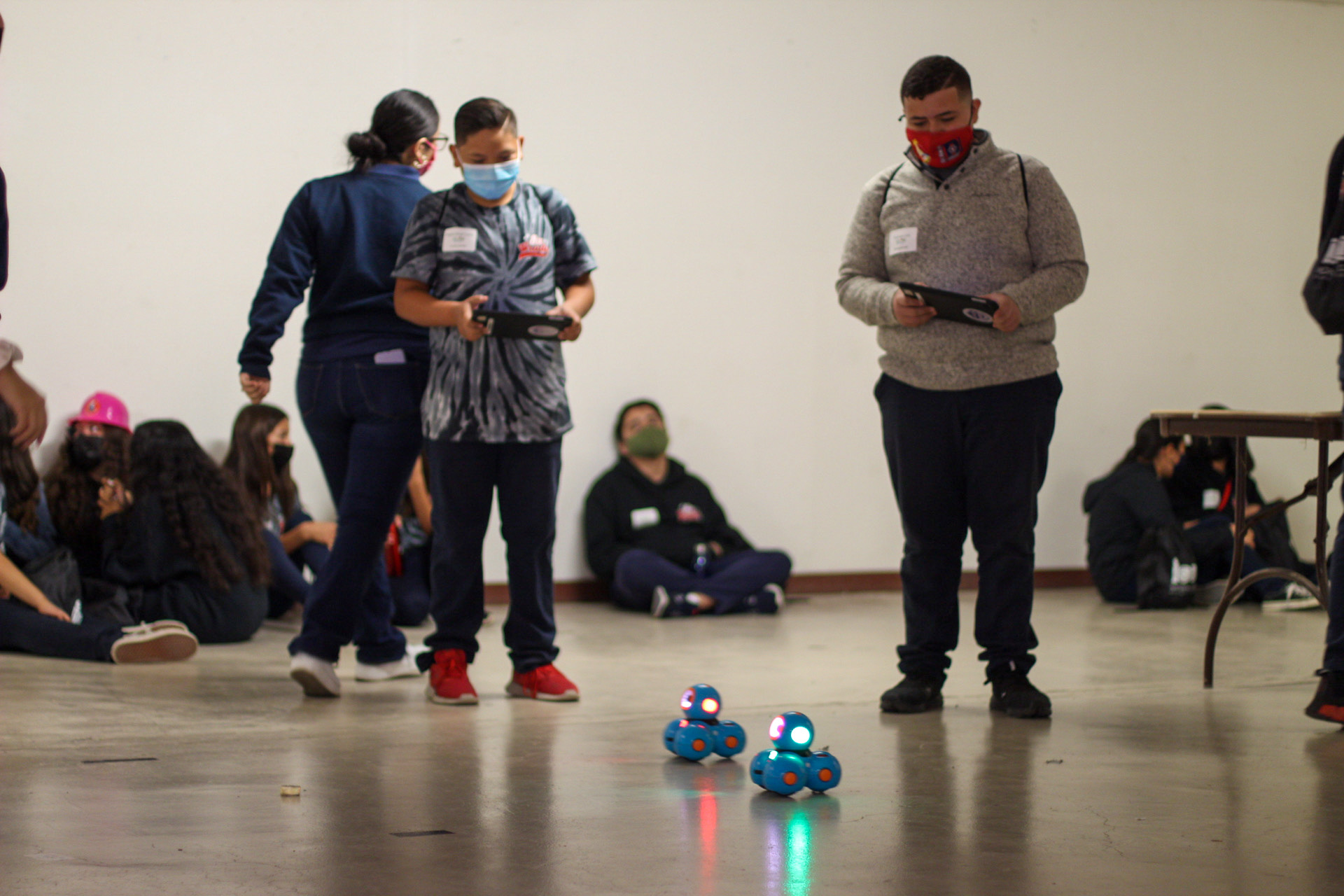 Francisco Lara and Rogelio Reyes, eighth graders at De Anza Magnet School in El Centro, use the Dash robot at the El Garage booth during the STEAM Festival on Tuesday, Nov. 16, in Imperial. | MEGAN JONES PHOTO
In EducationFeatured StoriesRegional News

IMPERIAL — Science, tech, math, and arts-related happenings were in big supply at the IV Fairgrounds on Tuesday morning, Nov. 16 at the Imperial County Office of Education’s annual STEAM Festival.

ICOE’s first event of the 2021 academic calendar year and its first in-person student event since the pandemic was declared took place inside the Casa de Mañana building for the Valley’s middle-school-age students.

The STEAM Festival has been a big event for ICOE for the past five years, said former McCabe Union STEM teacher Michael Garcia, who this year became a curriculum coordinator with ICOE.

The goal of the day was to provide fun, engaging, academically sound experiences with the presenters and sessions, Garcia said. The hope, he added, is that the students will begin to make connections with their learning, problem solving, and be ready for their futures in college and careers.

“Whether it’s global or working its way all the way down to the county level for Imperial County, we look forward to having those types of students join our workforce and be prepared to solve today and tomorrow’s most difficult problems,” he said.

Students gathered for a rotation of sessions held by different local groups. The sessions were all held based around STEAM problem-solving skills that Garcia called the four Cs: creativity, collaboration, critical thinking, and communication.

El Garage Hub had a “Makers Space,” where students were able work with robotics, 3-D printers, and coding. In another space, students could build a “scribble bot” to make a collaborative, abstract art piece.

Dr. Jim Fisher from IVC had a chemistry class where students learned about chemical reactions. One of the highlights was the presentation on acid rain where they were shown compounds that create a weak acid.

Peyton Garcia, a seventh-grade student from McCabe and one of Michael Garcia’s children, said this was her favorite session of the morning. She particularly liked the demonstration and experiments with dry ice.

“It was fun because there were a lot of different things to do there,” Peyton said. “It was fun to see people for a while, and it was cool that we got to be out more.”

Farm Smart presented a session on the water cycle and the Central Sound Group led by Dr. Tom Tacke had a session where the kids were shown how to put together a collaborative soundtrack using found sounds and samples.

And the IID gave the youths an exclusive sneak peak of a different look for the iconic Dippy Duck, Lineman Dippy. Lineman Dippy has not been seen in the Imperial Valley in a long time, Garcia said, the IID told the students.

Garcia thanked the management at ICOE, including Superintendent of Schools Dr. Todd Finnell, and Jeanette Montano, ICOE senior director of Curriculum and Instruction, the schools that coordinated with them, and everyone in the ICOE curriculum department for making the day possible.

ICOE’s upcoming academic calendar is filled with big competition events for the rest of the year, including the county spelling bee, mock trial, and the academic decathlon, Garcia said.

Previous
Supervisor Castillo Exposes Many to COVID at Events

Next
IVC Contending for Aspen Prize for Excellence