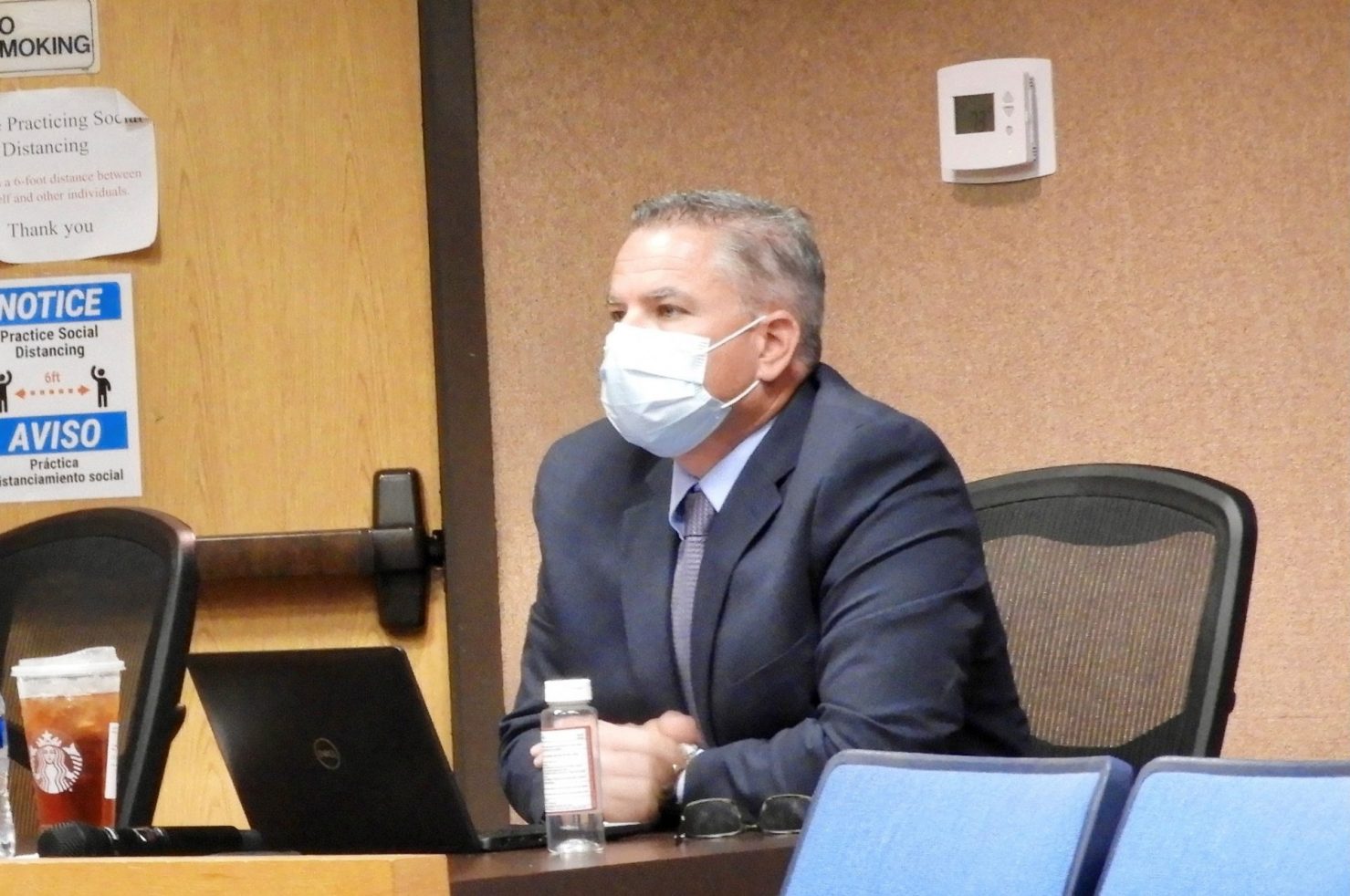 Imperial County Executive Officer Tony Rouhotas Jr. is shown on Oct. 19. He announced to the Imperial County Board of Supervisors on Tuesday, Nov. 16, that he would not renew his contract when it expires on Dec. 31. | MARCIE LANDEROS PHOTO
Home
Regional News
In Regional News

EL CENTRO — Imperial County Executive Officer Tony Rouhotas Jr.’s announcement that he will not seek a new contract at the end of the year has brought of swell of emotions among the county Board of Supervisors.

“Clearly I’m saddened by his pending departure. Tony has served as CEO during one of the most difficult and volatile times affecting the US and the world, caused by a virus named COVID-19,” District 5 Supervisor Ray Castillo said in an email Tuesday night, Nov. 16.

“This pandemic has caused many disruptions in our society, and overall, the whole business community. Surviving the COVID pandemic has probably been the most difficult period experienced by everyone on planet Earth,” added Castillo, who himself is quarantining at home after being diagnosed with the coronavirus on Friday, Nov. 12. “Thanks to Tony and our dedicated county employees, they have managed to keep government functioning.”

Rouhotas, who made the announcement to the board on Tuesday, was the Imperial County fire chief before ascending to the CEO position in December 2017. In the position, he is responsible for 26 departments comprised of more than 2,400 staff members.

“I wish he were he would be willing to stay longer …  He built a great bridge in bringing our community, our employees and the dias together (the board),” District 1 Supervisor Jesus Escobar said on Wednesday, Nov. 17. Escobar is also vice chair of the board. “I think he did a great job and it’s going to be a tremendous loss for the county. I’m really, really saddened by the news that he won’t be staying on for a longer period of time.”

Rouhotas’ current employment contract ends on Dec. 31, and Escobar believes that he will stay on to guide the county and ensure a smooth transition of leadership.

Rouhotas was hired as CEO on Dec. 30, 2017, after serving as fire chief and coordinator of the Office of Emergency Services for nine years. He joined the county for the first time in 1992 as a reserve firefighter, where worked up through the ranks as a firefighter/paramedic, fire captain, deputy fire chief/training officer, and assistant fire chief.

“Tony came at a time when, I am sure he didn’t expect it, but we had multiple challenges that occurred during his tenure, and it was fortunate for the county to have him in the role of executive officer during the cyberattack and during a pandemic,” District 4 Supervisor Ryan Kelley said on Wednesday. “His history of emergency response was beneficial to the county overall in the way that we responded and the way that we’ve been able to continue in operation.”

Rouhotas helped to guide Imperial County through the process of rebuilding the Imperial County network systems after a ransomware attack in April 2019 all but crippled the county, at least taking parts of the system offline for several weeks. Hackers attempted to exhort $1.2 million in bitcoin from the county, but rather than acquiesce, the Board of Supervisors fought back and rebuilt the network.

Overall, the system rebuild cost around $4 million but has prevented any further attacks to occur thus far. Much of the costs were taken up by insurance.

“He has gone through some really, really tough times with respect to balancing our budget, dealing with COVID, dealing with all the other the crises that had occurred throughout the last couple of years. And he has done an outstanding job,” said board Chair Michael Kelley, Distroct 3’s supervisor.

“I’m so proud of him as a professional and as an individual and as a friend. I couldn’t be more proud of him,” Michael Kelley said on Nov. 17.

Rouhotas declined to be interviewed for this story.

An Imperial County native who graduated from Brawley Union High School, Rouhotas went on to earn a bachelor’s degree in business from Walden University, an online university headquartered in Minneapolis. Rouhotas also earned a master’s in emergency management from Columbia Southern University, a private online university based in Orange Beach, Alabama.

“The decision to step away is a hard choice, but you take your personal health and your needs, your family’s needs as a priority. I totally understand,” Ryan Kelley said.

None of the supervisors would comment on Rouhtas’ reasoning behind the decision.

“I wish him the absolute best. I’m sure his future continues to be bright, and he will be going in avenues that will satisfy him,” Michael Kelley said. “And yet, at the same time, give him an opportunity to serve the community and give back.”

Castillo stated that Rouhotas’ “can-do attitude” was a comfort for the board during such a turbulent juncture.

“Enjoy your much-deserved retirement. Best wishes for any future endeavors which may come your way,” Castillo added. “Tony is truly a No. 1 hero riding off into the much-deserved sunset.”

(This story was updated at noon Wednesday, Nov. 17.)

Next
Imperial County OKs Plan for Barbara Worth Sewer Spills