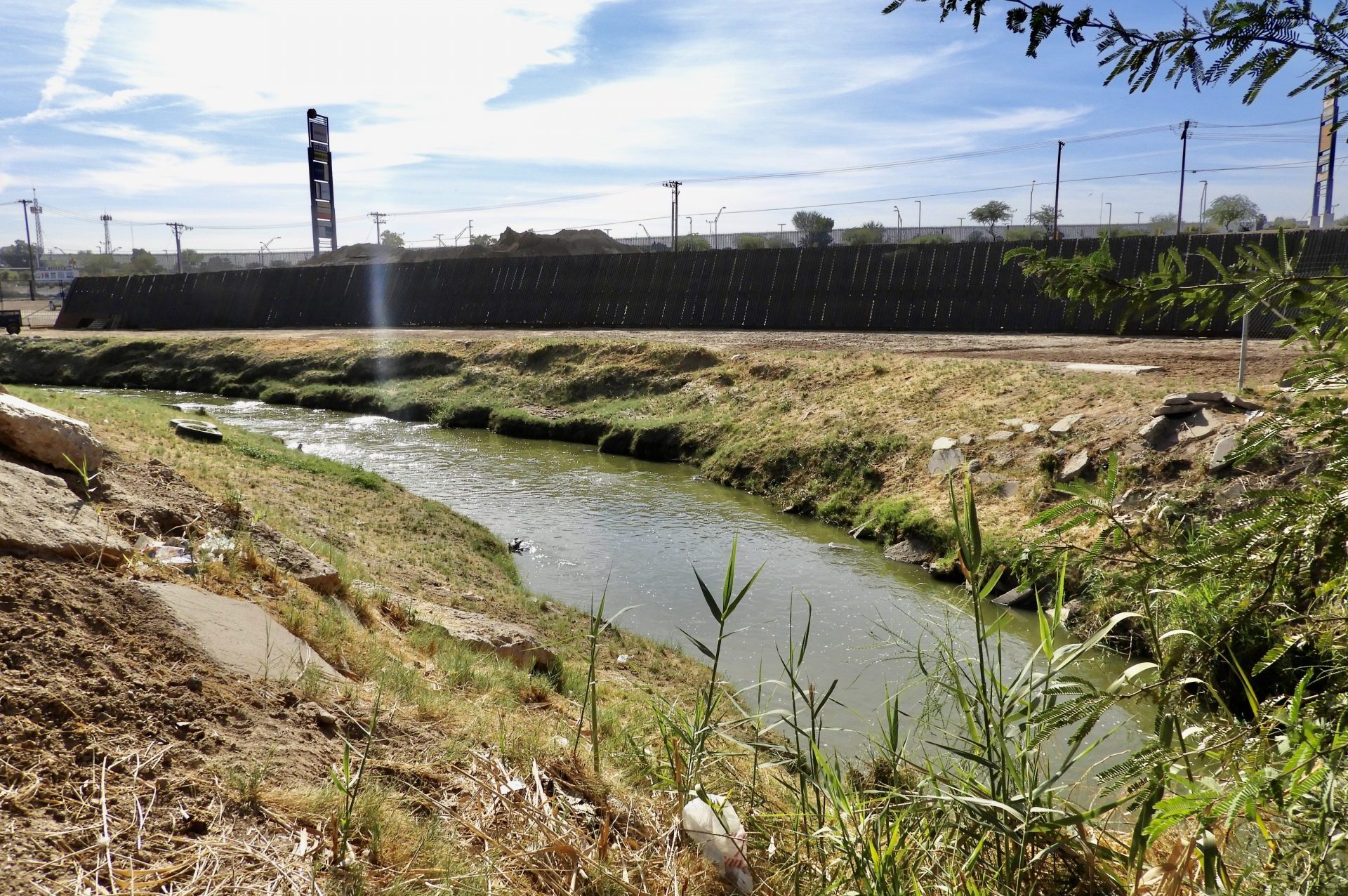 Imperial County's New River flows through the city of Calexico, causing health issues for community members throughout the county. County and city officials celebrated the ribbon cutting of a monitoring station on Thursday, Nov. 18, to assess air quality along its banks. | MARCIE LANDEROS PHOTO
In Regional News

“I’ve been a resident of Calexico for 40 years. On a personal level, I have three asthmatic children, pre-asthmatic … they’re pre-asthmatic. Two of them have had successful battles with cancer,” Escobar said of why he so passionately supported the station in an interview after the ceremony on Thursday morning, Nov. 18.

The waters of the New River have long been accepted as heavily polluted, having no natural source of replenishment at its headway in Mexico, instead being filled with Mexicali Valley’s agricultural runoff, municipal discharge, and industrial wastewater as it flows into Calexico, making the river considered one of the most polluted streams of its size in the United States.

Rather than focusing on the pollution of the water, which has been long studied, this monitoring station will focus on the air quality around the river, to find what potentially health-harming chemicals the river might be putting into the air.

“This is a huge goal for Imperial County, and the reason is that there’s a lot of water analysis out there, but there’s not enough air-quality analysis. And the issue is that there is a lot of health issues around this area, so the Imperial County, as well as the city of Calexico, will benefit from the analysis of the results from this,” said Belen Leon Lopez, interim assistant Air Pollution Control Officer for the Air Pollution Control District, in an interview after the ceremony.

“My family, my kids suffer from asthma,” Lopez added. “So a lot of people here from the Imperial Valley are going to benefit, not only myself, but a lot of people from Mexico as well, because we could actually do a binational program that could help both sides of the border.”

For families like Escobar’s and Lopez’s, air pollution-related health effects issues are common in the Valley. Imperial County in 2019 had 3,786 cases of pediatric asthma, another 10,133 cases of adult asthma and chronic obstructive pulmonary disease, and 71 cases of lung cancer, according to data from the American Lung Association. This comes as no surprise when you consider the fact that in that same year, the El Centro statistical area was lasted at No. 8 for the worst year-round particle pollution among U.S. cities by the same organization.

Establishing the monitoring station is part of the grassroots air-quality efforts and projects of Assembly Bill 617, which addresses the disproportionate impacts of air-pollution exposure in the most heavily burdened communities throughout the state under the bill’s Community Steering Committee’s Community Air Monitoring Plan.

For several years now, a committee of local government officials, environmental justice organizations, community and business stakeholders and residents have been meeting to address and improve the air quality in the Calexico-Heber-El Centro community corridor.

AB 617, which was co-authored by Assembly member Eduardo Garcia, D-Coachella, requires local air districts to take specific actions to monitor air quality in specific communities, and to reduce air pollution emissions from commercial, industrial, and mobile sources that cause or significantly contribute to the air quality in these communities.

“This is an air-quality monitoring station that was able to come to life as a result of a partnership between the Air Pollution Control District in the county of Imperial and the city of Calexico. The city of Calexico provided the land through an agreement, so we could be as close as possible to the New River to capture the air quality through the emissions of the river, which is the purpose,” Calexico City Manager Miguel Figueroa said. “So in turn, we get the data that we need so we can go ahead and continue to be proactive in addressing the issues that stem from the public health threat posed by the New River.”

The station will be monitoring for pesticides, hydrogen sulfide ammonia, and volatile organic compounds, which are gases emitted from certain solids or liquids that may have short- and long-term adverse health effects, Lopez said.

Volatile organic compounds are human-made chemicals that are used and produced in the manufacture of paints, pharmaceuticals, and refrigerants, and industrial solvents, such as trichloroethylene; fuel oxygenates, such as methyl tert-butyl ether (MTBE); or by-products produced by chlorination in water treatment, such as chloroform, according to the U.S. Environmental Protection Agency.

“We’re having access to data points that we didn’t have before, meaning with this monitor here, we’ll be able to make a stronger case on the air-quality component that, as we know, is causing a lot of respiratory illnesses in our community, not only in Calexico, but in our region,” Figueroa said. “So with that, we’ll be able to implement more awareness advocacy projects in which we can move the needle in the right direction in making sure that the policymakers in Sacramento and in DC properly allocate monies to address the environmental public health needs that we have in the Imperial Valley.”

The New River monitoring project will collect data for a six-month period, then researchers will write a report that will summarize all statistical analysis, the overall data completion, and the achievement of data quality objectives. That report will be submitted to the Imperial County Air Pollution Control District for review within 45 days of the final day of measurement collection, and once the report is approved by the district, a summary of the project findings will be presented to the AB 617 Community Steering Committee.

The city of Calexico has been leading the effort for quite some time to deal with the water-based pollutants in the river. During the Nov. 3 Calexico City Council meeting, the community heard from Jose Angel, the city’s project manager for the New River Improvement Project.

“We all learned the tangible progress we’re making now where we can actually see it, where we can tell the people, so this is just another element within the whole scope of our efforts to address this long-standing issue that at the end of the day, the No. 1 concern that we have, it’s that it’s a public health matter that it’s not exclusive to Calexico, that it’s not exclusive only to the residents of the west side of town, but to everybody as a whole in our region,” Figueroa said during the Calexico council meeting the night before, Wednesday, Nov. 17.

“Anything related to the environment I hold near and dear to my heart. Why? Because it’s unfair that children have to deal with these types of issues,” he said. “And I think we need to give our children, and our citizens that due respect that they deserve by making sure that we’re going all out from an environmental and health perspective in our region.”

Next
Half Ton of Meth Seized at Calexico East