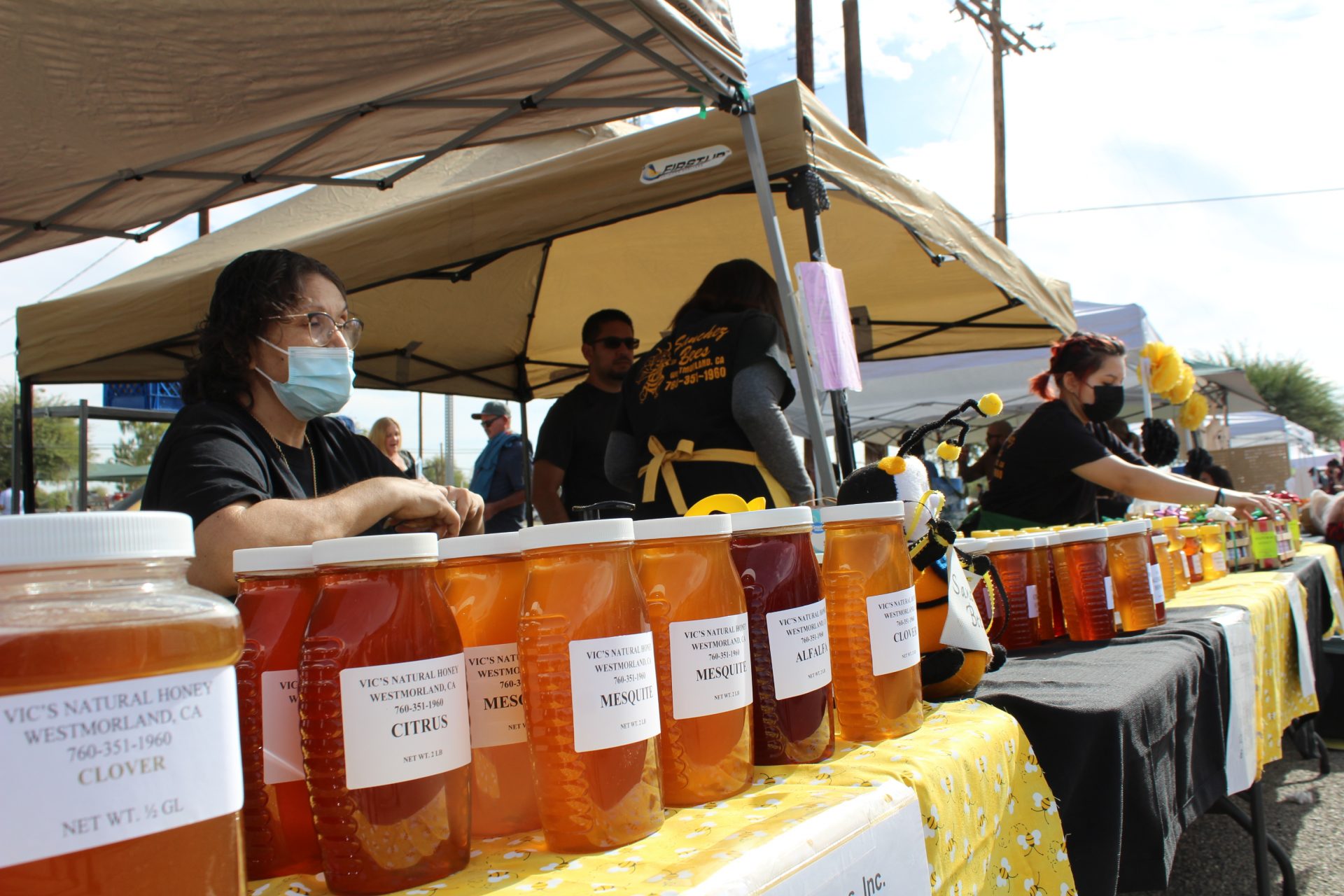 Various honeys gleam in the sunlight at the Sanchez Bees Inc. stand on Saturday, Nov. 20 at the annual Westmorland Honey Festival, organized this year by the Imperial Valley Regional Chamber of Commerce. | KATHERINE RAMOS PHOTO
In Regional News

WESTMORLAND — After a year in hibernation, Center Street was abuzz with activities, both new and old, on Saturday, Nov. 20 for the return of the annual Westmorland Honey Festival.

The buzz was for more than just the honey, though. This year’s festival was bigger than previous years, with 80 vendors from all over the Imperial Valley, including the requisite honey purveyors plus food vendors and informational booths.

The organization of the festival has been taken over by the Imperial Valley Regional Chamber of Commerce in an effort to support the city of Westmorland. Regional chamber of made up of the former El Centro, Imperial, and Westmorland chambers.

“We don’t want it to just be El Centro. We want our community to know that we are coming from all over the Imperial Valley,” said Julissa Ayala of the regional chamber. “That’s what I.V. Regional is all about, bringing our communities together and support our cities.”

Early in the morning there was a 5-kilometer run for adults followed shortly after by a color run for the children. There was even a small parade around City Hall Park. Around noon children in fourth through eighth grades competed in a spelling bee. Other contests included a Valley-wide coloring contest and an essay contest.

A boxing exhibition at nearby Mono’s Gym went on in the morning, as did a pancake breakfast hosted by the Westmorland Fire Department.

“It’s changed, but in a positive way,” Ayala said. “That’s what we want people to know.”

Melisa Barajas is a lifelong resident of Westmorland who has attended all the previous festivals. She said she noticed how much it has grown and was happy to see it.

“Community, the get-togetherness, the honey; it’s just the environment,” Barajas said. “I feel happy that the community has gotten back together again.”

Zach Fierro came down from San Diego with his girlfriend, a former resident of Westmorland. He has been a regular visitor for the past four years. He likes that the Honey Festival is a closer-knit festival than what he would usually see in San Diego’s farmers markets.

“We come for family, and I like the neighborhood feel to it all,” Fierro said. “We recognize everybody who shows.”

Although the festival was larger overall, the number of honey vendors had dropped from six down to just two this year: Sanchez Bees Inc. and Ashurst/Avery Girl Honey. Both have been around since the early years of the festival, but Sanchez Bees owner Victor Sanchez said he’s been part of the organization since day one.

Richard Ashurst said this year felt like it was bigger than in years past, remembering when his grandfather years ago would push for Westmorland to be named the Honey Capital of the World and when the festival began to promote honey. Ashurst added his own business has been changing and growing just like the festival with new products and honey flavors.

“I’m surprised how many years have gone by so fast,” Ashurst said. “I think it’s been really good for Westmorland.”

Sanchez remembered when the festival was a lot smaller, but he said organization seems better now. He added it was a little sad to see he and Ashurst as the only honey sellers.

Sanchez said he has been a part of the festival for so long he was awarded Beekeeper of the Year for the second time in a row.

“It feels real good to feel appreciated by the public,” he said.

Darlene Berber, Westmorland city clerk, has been a part of the Westmorland Honey Festival for years. Always putting in time to make the festival great and improving the community, the city of Westmorland named her Busy Bee of the Year.

“It’s an honor, I don’t have words. I don’t do it for that at all, my experience is be the best person you can be and be the change you want to see,” Berber said.

Both Sanchez and Berber received their individual awards for the second time in a row, the first time being back in 2019.

Next
Understanding the Debate Behind California’s New Math Framework